Airing in the late 1980s to 1990 DuckTales was a really popular children’s cartoon that followed Uncle Scrooge and his grandnephews Huey, Dewey and Louie on their quest to find treasure. While the show only lasted four seasons it had a pretty dedicated fanbase and last year was brought back for a new series. Like most children’s properties from the 1980s and 1990s the show spawned a lot of merchandise from a really popular NES video game to today’s topic the DuckTales Board Game. Even though I remember liking the show as a kid, I can’t say that I had high expectations for the board game due to my experiences with the Jetsons and TaleSpin board games which were part of the same line of cheap board games made to capitalize on popular cartoon franchises. I held out hope though as I was hoping that it would surprise me. It didn’t as the DuckTales Board Game may appeal to fans of the series but it is a boring, mostly pointless board game that you should not waste your time playing.

How to Play the DuckTales Board Game 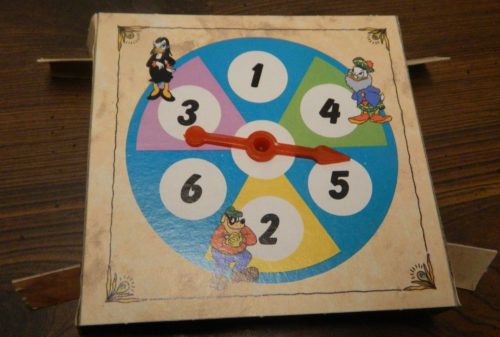 This player has spun a five so they will get to move their playing piece five spaces.

If a player chooses to use a shortcut they will only count the spaces before and after the shortcut. 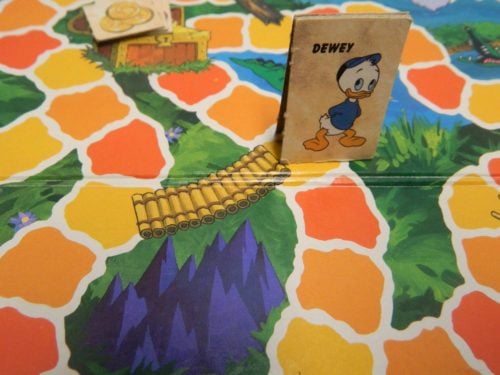 The Dewey player has used a shortcut.

If a player spins a 2, 3 or 4 in addition to moving their own playing piece they will also have to move the corresponding bad guy the number of spaces spun. Players will move their piece first and then the bad guy’s piece. When moving the bad guy’s piece it can be moved however the player who spun the spinner wants but must be moved as many spaces as was spun. 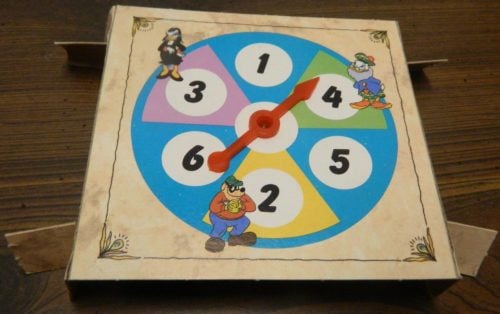 If at any time a player’s pawn is on the same space as one of the villains, the player’s pawn is moved to the corresponding villains lair/starting space. A player’s playing piece cannot be captured if they are on one of the last five spaces of the board (green spaces) as this is considered a safe zone. On their next turn the player can move out of the bad guy’s lair. 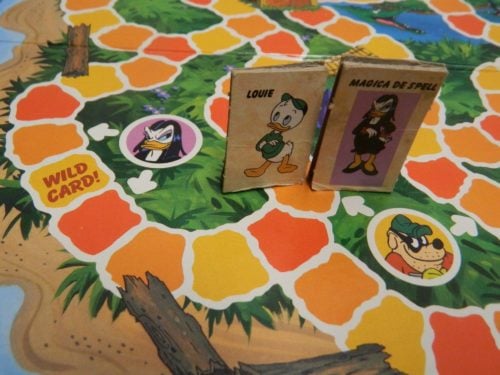 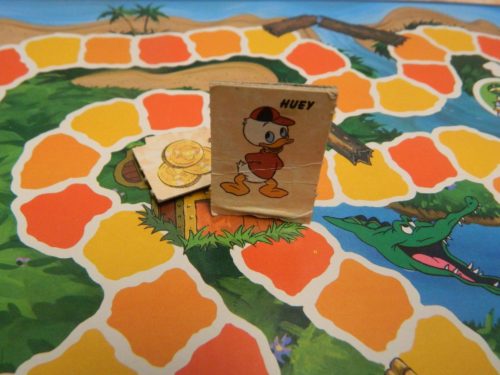 The Huey player has reached the treasure chest so they will collect a gold coin.

At the beginning of the game each player is given two wild cards. If a player wants to use a wild card on their turn they flip it face down and announce which bad guy they are going to use it on before they spin the spinner. After moving their own playing piece, the player will move the chosen bad guy the number of spaces spun. If the player spun a number that would normally move one of the bad guys, they will move the chosen villain instead of the one shown on the spinner. 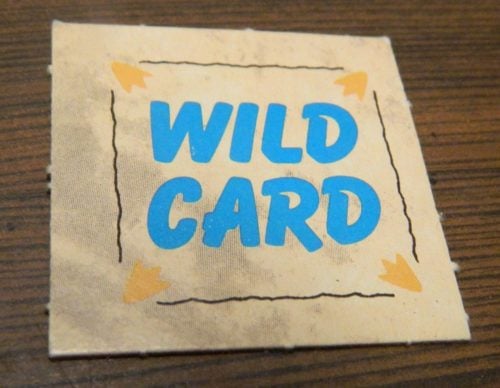 This player has chosen to use a wild card. They will move the villain of their choice the number of spaces spun.

Players may only have two active wild cards at a time. If a player lands on or passes a wild card space, they can flip a facedown wild card so that is now face up.

Once a player has moved their pawn/villain pawn, play passes to the next player clockwise.

The first player to acquire a piece of treasure and reach the finish space (does not have to be by exact count), wins the game. 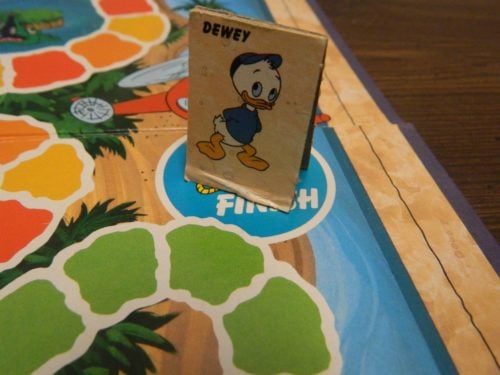 The Dewey player has reached the finish line. If they have already collected a gold coin they have won the game.

My Thoughts on the DuckTales Board Game

In general when I review board games I like to look at both the positives and the negatives. When I look at the DuckTales Board Game I have to say that it is hard finding a lot of positives. Basically the only positive I could think of for the game is that I think it could appeal to fans of the show. Now I wouldn’t recommend ever playing the game (more on this soon) but I could see DuckTales collectors being interested in the board game. The game features most of the characters from the show and the artwork is reminiscent of the show. I could see the DuckTales Board Game looking pretty nice sitting on a shelf next to other DuckTales merchandise.

Unfortunately the game should stay on that shelf and never be taken down to be played. The DuckTales Board Game may not be broken but it is a really bad game. The problem with the game is that it is so boring. Basically you spin the spinner and move your piece the corresponding number of spaces. There is so little to the game as the few decisions you have to make in the game are really obvious. The game was made for kids between six and ten and it shows. Basically the whole “strategy” in the game is to move towards the treasure and after acquiring it head towards the exit. The only reason to ever diverge from that plan is when one of the villains get in your way. This simplicity leads to a pretty boring experience.

The one area where the DuckTales Board Game had potential to add some strategy would have been with the addition of the villains. I didn’t have high expectations for the mechanic but I held out hope because it could have made the game more interesting. In execution though it fails to add much to the game. Basically there are only two potential strategies for the villains. You can either move them to get them out of your way or you can use them to send your opponents back to the villain’s lair. That is all there is to the mechanic. It is usually pretty obvious which option you should choose at any given time. For the most part the mechanic is pretty harmless but I was disappointed as I think the game could have done more with it.

The biggest problem that I had with the mechanic is that it can be used in a way that could potentially ruin the game. Players who are behind could try to use two or more of the villains to block off the exit. Players will then have to fight for control over the villains using their wild cards to move them in the desired direction. Having a few safe spaces around the exit helps but this issue is still relevant as it temporarily impacted the game that I played until only one player had a wild card left allowing them to win the game.

The other issues with the game are compounded by the fact that the game’s components are really cheap. While the artwork is pretty good, the rest of the components could have used some more work. In the 1980s and early 1990s Milton Bradley had a line of board games that mostly used movie/tv licenses which sold for a couple dollars. The games were made to be cheap and it shows in the quality of the components. Basically all of components other than the gameboard are made of pretty thin cardboard which is prone to creases and tears. The gameboard itself is even pretty thin and is prone to warping. While you can’t really blame the game for the component quality with how cheap it retailed for, the components are not particularly good either.

At the end of the day the DuckTales Board Game’s saving grace may be that the game is quite short. Unless you get into a prolonged battle over villains blocking off the exit, I can’t see games taking more than 10-15 minutes to complete. With all of the problems with the game you likely will be glad to see the game end so quickly as the game is at least bearable at that length. If the game was longer it would have been considerably worse as the boredom would have dragged on for longer.

Should You Buy the DuckTales Board Game?

Having liked the show as a kid I was hoping the DuckTales Board Game would have been good but it unfortunately isn’t. The problem with the game is that it is just boring. It is a very generic and simplistic spin and move game where players take turns spinning and moving their pieces around the board. This leads to a boring experience as it is pretty obvious what you should do on any given turn. The game tries to supplement the rest of the game by adding villains that you can move around the board. Unfortunately these become more of a nuisance than anything else as it is pretty obvious how you should move a villain on any given turn. Add in subpar component quality and there is not a lot to like about the DuckTales board game. Basically the only redeeming quality about the game is that I think it would work pretty well as a collectible for people that collect DuckTales merchandise.

As the DuckTales Board Game is not a very good game, I have a hard time recommending it. I would only recommend it in two situations. If you have young children who also like DuckTales, I could see them having some fun with the game. Otherwise I could see fans of the show buying the game as a collectible. For those people though I would recommend they keep the game on the shelf rather than playing it because it is not a very good game.

If you would like to purchase DuckTales you can find it online: Amazon