While I can remember occasionally watching reruns of The Jetsons when I was a child, I don’t remember being a huge fan of the series. I haven’t seen any episodes of the show in many years, but it is a show that I would like to watch at some point. I have always found shows and movies about the future from the past to be really interesting since it is fun to see what previous generations thought the future was going to look like. Due to Milton Bradley being obsessed with making children’s games based on cartoons in the 1970s to the early 1990s, it doesn’t surprise me that there was a Jetsons Board Game made. As a matter of fact the Jetsons have had four board games made with three of the games being made during the shows initial run in the 1960s and one board game based on the run in the 1980s. The game I am looking at today is the 1985 board game. While the game may be charming for fans of the show, The Jetsons Game doesn’t have much going for it outside of nostalgia.

How to Play The Jetsons Game

Each player chooses a playing piece and puts it on any gamespace. All of cards are shuffled and are placed out onto the four circles on the board in equal quantities. All of the payers roll the die with the player rolling the highest number getting to go first.

On a player’s turn they roll the die and move their playing piece the corresponding number of spaces. Players need to move their pawn in the direction of the arrows printed on the board. If a player reaches an intersection where arrows point in two different directions, the player can choose which path they would like to follow. If a pawn lands on a space occupied by another player, they move their pawn to the next space.

If a pawn lands on a blue space, the player’s turn ends immediately. If a pawn lands on a space that features Orbitty the player will draw the top card from the pile associated with the section of the gameboard they are currently in. If there are no cards left in that pile, you don’t draw any cards on your turn. When you draw a card you could draw a couple different types of cards.

When one player has gathered all three cards for their character along with an Elroy card, they win the game. 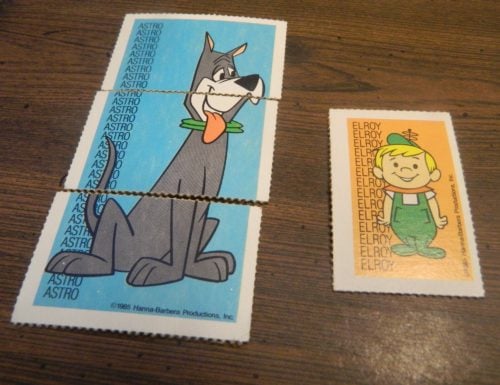 My Thoughts on The Jetsons Game

The one somewhat unique mechanic in The Jetsons Game is the memory mechanic. As you travel around the board you and the other players will pick up cards. These cards picture different characters from the show. While a couple of the cards do something unique, most of the cards are just things players need to collect in order to win the game. To win the game you need to find an Elroy card and the three cards that make up the character that you are playing as.

While this is an addition to the typical children’s roll and move game, the mechanic really doesn’t add anything unique to the game. Usually you just luck into drawing one of the cards that you need to win the game. When another player finds one of your cards they will put it on the bottom of one of the piles and you need to remember which pile they put the card in. This memory mechanic is kind of pointless though since the card can only be put in one of four piles. Unless you have a terrible memory or are distracted you won’t have any trouble remembering where your cards were placed.

While it doesn’t really add much to the game, I will still give Milton Bradley a little credit for this mechanic since they actually tried to do something new with the children’s roll and move genre. Most children’s games from the 1980s consisted of just rolling to see who would reach the finish line first. While the memory mechanic really adds nothing new to the game for adults, I could see young children liking the mechanic as they move around the board looking for their cards.

Anyone familiar with these type of Milton Bradley children’s games shouldn’t be surprised that the game’s component quality is pretty bad. These roll and move games were designed to be budget games as I am assuming that they sold for only a couple dollars when they were initially released. The cheap price is reflected in the game’s quality though. Most of the components are made of thin cardboard. The artwork will probably appeal to fans of the show but there really isn’t anything else to like about the game’s components.

Not being a big fan of roll and move or memory games it shouldn’t come as a big surprise that I didn’t really care for The Jetsons Game. I just found the game to be dull and almost entirely reliant on luck. I am far from the target audience for the game though. Young children will probably have more fun with the game than adults since the game was designed to be simple. Fans of The Jetsons may also enjoy the game more than I did.

Should You Buy The Jetsons Game?

Not being a big fan of The Jetsons I wasn’t surprised that I didn’t really care for The Jetsons Game. Basically it is your typical children’s roll and move game with a very light memory mechanic blended in. Since the memory mechanic is so simple, the game basically comes down to whichever player rolls the best. The game’s component quality is far from great as well. Basically I found the game to be quite boring with little to no decision making.

If you would like to buy The Jetsons Game you can find it online: Amazon