Gamewright is a board game company that has been a little hit and miss for me in the past. Gamewright has made some truly great games (Sushi Go, Dragonwood) but there have been other games that I didn’t really enjoy. Being a company that makes both children’s and family games, it seems like most of the good Gamewright games were designed for families while the game’s that were mostly designed for children didn’t really work for me. This made me a little cautious towards Duck Duck Bruce because it looked like a solid game but it also looked like it was designed for children. While Duck Duck Bruce is not a fantastic game, it turned out to be a better press your luck game than I was expecting.

How to Play Duck Duck Bruce

Shuffle the cards and place them face down on the table. Place the die within reach of all of the players. The player that has most recently fed a duck gets to start the game.

On a player’s turn they turn over the top card from the draw pile and place it on the table. If the card features a duck the player has a choice to make: 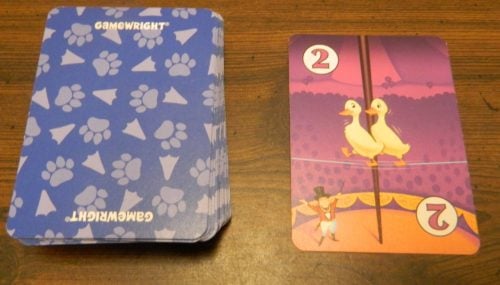 This player has flipped over a card. They can choose to take the card or press their luck and flip over additional cards.

If a player decides to draw another card the player can keep drawing cards until they decide to stop or they draw a card that ends their turn. If a player chooses to stop they take all of the face up cards from the table and put them into their nest.

This player’s turn has ended because they have drawn two football field cards. They won’t collect any cards this turn since all of the cards are between the two duplicate cards.

A Bruce card has been revealed so the player loses all of the other face up cards. They will have the opportunity to steal cards from another player though.

The current player then chooses one of the other players that they would like to try and steal cards from. The player declares how many cards they want to steal from that player (1-3) and then they roll the die. There are three possible outcomes of the roll:

After a player has completed their turn, play passes to the next player.

A round ends when the last card from the draw pile has been revealed. Players then proceed to scoring. Before counting up the amount of points earned in the previous round, players sort their cards based on the background of the cards. Once a player has sorted all of their cards, they count up the points from the highest valued card of each background. All lower valued cards are worth nothing in scoring. Players write down their score for the round. 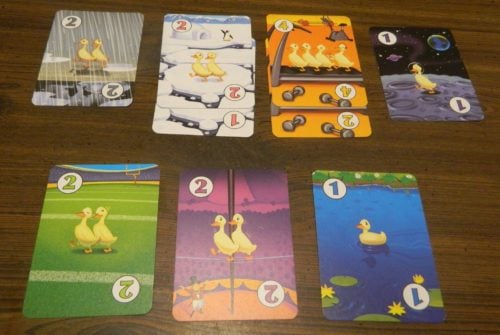 This player has scored 14 points. The two duplicate cards are worth zero points.

If none of the end game conditions have been met, another round is played. The player with the least points will start the next round. All of the cards are shuffled and a new round begins.

The length of a game of Duck Duck Bruce is determined by the players before starting the game. Players can choose one of three ways to end the game:

When the game ends whichever player has the most points wins the game.

My Thoughts on Duck Duck Bruce

I will say that I was a little surprised by Duck Duck Bruce. At its core it is your basic press your luck game. The goal is to flip over as many cards as you can and then stop before you turn over a card that makes you lose all of the cards you drew during the round. If you have ever played a press your luck game before you should have a pretty good idea of the basics of Duck Duck Bruce.

Being a children’s/family game it is not surprising that the game is quite easy to play. As it is mostly a press your luck game you just decide whether you will flip over another card or take the cards already flipped over. While you can use probabilities and your memory of the cards that have already been flipped over to help you in your decision making, there really is no reason why you should put too much thought into any given move. I honestly think it will take most players only minutes to learn how to play Duck Duck Bruce. While the game might have an age recommendation of 6+ I think younger children wouldn’t have that much trouble with the game as any problems would probably come from the scoring phase of the game and adults could help them with that aspect of the game.

In addition to the simplicity another strength of Duck Duck Bruce is the game’s flexible length. The game has three different ways that you can play the game. You can play a given number of rounds, play for a certain amount of time or play to a certain number of points. I personally played to a given number of points which is probably what I would recommend for other players as well. Playing to the recommended number of 77 points ends up taking around 20 minutes which feels right for the game. What I like about the flexible length is that you can easily make the game shorter or longer depending on how long you want to play the game.

I think the mechanic that adds the most strategy to the game though is the idea that you only score the highest valued card of each type of card you collect. Therefore outside of protecting yourself from a card being stolen, there is no real reason to keep collecting lower valued cards of a type you already own. These cards won’t give you any points so you shouldn’t put much value on them when choosing between pressing your luck or taking the cards. There are times in the game where you can flip over a lot of cards and yet none of the cards really help you. In this situation you are more likely to continue pressing your luck when you otherwise would have quit.

Other than adding a little more strategy to the game, I like this mechanic because I feel it slightly reduces the game’s reliance on luck. While it increases the value of flipping over high value cards, it does reduce the value of being able to flip over a lot of cards on your turn. If you flip over a bunch of cards but most are duplicates they don’t really help you. By reducing the value of quantity the game encourages people to quit earlier when they have valuable cards in front of them.

While the Bruce card doesn’t usually play a big role in the game, I think it is still an interesting mechanic. If you have a good memory you can keep track of how many Bruce cards have been drawn so you know the likelihood that you will draw one if you continue pressing your luck. While it is never good drawing a Bruce card when you have flipped over a lot of cards, Bruce can sometimes be more valuable then being able to keep drawing cards. While you are likely only going to get one or two cards, those cards can be quite valuable. It is a wise decision going after the player in first place, but it is really tempting to go after another player if you know all of their cards are high values. While Bruce adds quite a bit of luck to the game, I think the card adds some interesting decisions as well.

With that said I would say the biggest problem with Duck Duck Bruce is the fact that it doesn’t drastically change anything about the press your luck genre. If you have played another game in the genre Duck Duck Bruce is not going to be drastically different. The basic mechanics of the game are shared with most of the other games from the genre. Duck Duck Bruce has some nice tweaks to the formula but there aren’t enough unique mechanics in the game to make someone who doesn’t like press your luck games suddenly start liking them.

While there really isn’t a lot to talk about as far as components since the game just has cards and a die, I have to say that I really appreciate the effort that went into the cards themselves. The card quality is what you would typically expect from a normal Gamewright card game. Where the cards really stand out though is the artwork. I honestly don’t know how anyone wouldn’t love the artwork. The artwork is so well done that it is some of the cutest/most charming artwork I have seen in a children’s game in quite some time.

Finally this really isn’t a complaint about the game itself but Duck Duck Bruce appears to be one of the rarer Gamewright games. The game was first released in 1997 and was later re-released in 2007. Since 2007 though the game has not been reprinted in the United States. Since the game hasn’t been in print for around a decade, it is not surprising that the game’s value has been increasing quite a bit. At the time of this post Duck Duck Bruce is selling for around $30-$50. While Duck Duck Bruce is a pretty good family press your luck game, I personally don’t see it being worth $30-$50 with how many other press your luck games that are out there.

Should You Buy Duck Duck Bruce?

If you would like to purchase Duck Duck Bruce you can find it online: Amazon

Thanks for the help! We lost the instructions but with your webpage my five-year-old son and I were able to have a really fun game session together. Definitely bookmarking for future game needs!