One of the first things that I look for when looking at a children’s game is the recommended age. Generally when a game has a really young recommended age or an upper age limit I ignore them. The reason I mostly ignore these games is that they were made for young children and thus are usually really boring for adults. I was intrigued by Crossed Wires though because it is a speed game where players race to follow a path to see which two phones are connected. So despite having some reservations about the 6-12 age recommendation, I decided to try Crossed Wires. While it is not a fantastic game, I was actually kind of surprised by how much I enjoyed Crossed Wires.

How to Play Crossed Wires 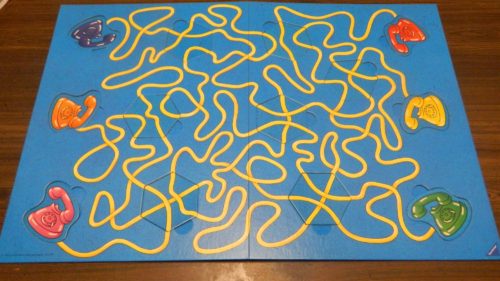 The current player rolls the color die. Whichever color is face up on the die indicates the telephone that the players will start at. All of the players at the same time must follow the wire coming out of the starting phone to see which phone it connects to. Players cannot use their fingers to trace the wire around the gameboard. 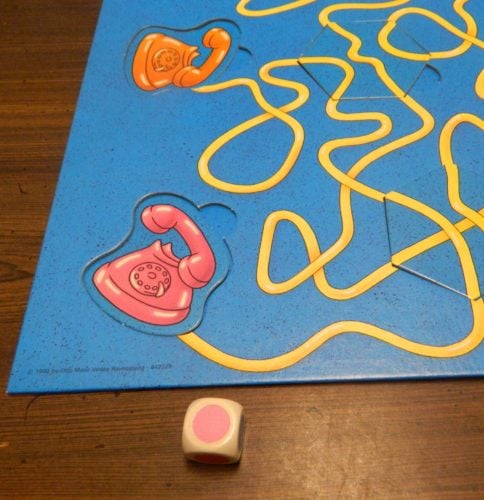 As soon as a player figures out what phone is connected to the starting phone, they place the corresponding card face down on the table. All subsequent cards are placed on top of the first card that was played. Once everyone has played one card, all of the cards played are flipped over. The players trace the wire from the starting phone to whichever phone it is connected to. Players then look at the answers submitted starting with the first player to play a card. The first player to play the right card gets one phone chip. 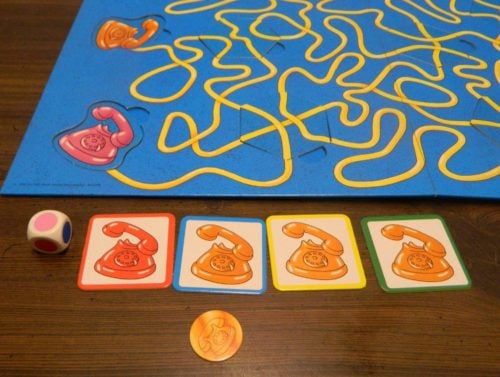 The red player was the first player to play their card but they chose the wrong phone. The blue player played their card next and played the right phone card so they receive a token.

The first player to get six phone tokens wins the game. 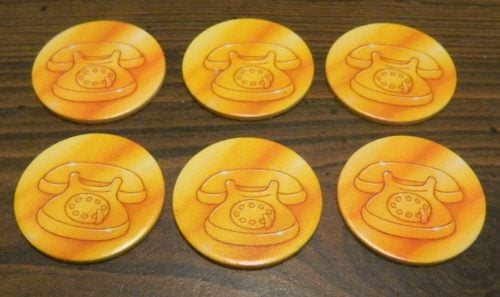 This player has acquired six phone tokens so they have won the game.

My Thoughts on Crossed Wires

I have to say that I was actually pleasantly surprised by Crossed Wires. Being a game made for children I worried that it would only appeal to children and thus be boring for adults. I wouldn’t say that it is a fantastic game but Crossed Wires actually exceeded my expectations. Crossed Wires might have been designed as a children’s game but it can be enjoyable for both children and adults.

At its’ core Crossed Wires is a speed game. The goal is to be the first player to play the appropriate card to the table. For each round all of the players have to trace the wire from the chosen phone to see what phone it connects to. As you can’t use your fingers to trace the wires, players have to follow the paths in their head. If you take your time this is pretty easy to do. Crossed Wires is a speed game though so you have no idea how close the other players are to finishing the route at any given time. This might force you to move through the path quicker which can lead to mistakes as you try to beat the other players.

This leads to an interesting trade off between taking your time to avoid mistakes or moving quicker in order to beat the other players. In some rounds the path between two phones is really short so players will play their card quickly no matter if they took their time or not. In the other rounds though players need to decide between being thorough or fast. The first player will have the best chance of getting a token but if they make a mistake they won’t receive anything. Work too carefully though and it is likely that most or all of the other players will play their card first. The likelihood of them all being wrong is pretty unlikely. Therefore players really need to find the perfect balance between being through enough to avoid mistakes while being fast enough that all of the other players won’t beat you to playing a card.

Crossed Wires is never going to be confused for a complicated game but it does a pretty good job at what matters most, being fun. There is really only one mechanic in the entire game but that mechanic is quite fun. It is hard to explain why but it is surprisingly fun tracing the wires around the gameboard to see which color phone it will connect to. I have played quite a few different speed games and yet I haven’t played anything quite like Crossed Wires. The game doesn’t redefine the genre but it is still an unique and engaging experience.

While Crossed Wires can be a fun game, I think the biggest problem with the game is the fact that it is not the type of game that you want to play for long stretches of time. At most you would probably only play the game once or twice before putting it away for another day. I would say most games of Crossed Wires will probably take between 15-20 minutes which makes it work pretty well as a filler game. I can see playing Crossed Wired for around a half hour without any troubles. I just feel that the game will become repetitive pretty quickly if you play it for longer than that.

Another potential issue I see for Crossed Wires is that some players will be naturally better at the game than other players. A player who is not good at speed games will have a very hard time staying competitive in the game. While being accurate is important, it doesn’t matter how accurate you are if it takes you a long time to play a card. In my group there was usually only seconds between the first and last player playing their card. While my group was pretty balanced I can definitely see one player winning almost every game if they are considerably faster than the other players. If you don’t have a good reaction time, Crossed Wires might not be the game for you.

Like with most Ravensburger games, the components are pretty good. Most of the components are made of pretty think cardboard typical of most Ravensburger games. The artwork is a little bland but serves its’ purpose and what more could you really expect out of a game where you figure out what phones are connected to one another. I give the game credit that the path tiles are designed in a way that they can be placed in any spot and rotated in any direction and still create valid paths for all of the phones. This actually creates quite a few combinations despite only having seven different path tiles. This is shown when just by changing two tiles you can significantly change what phones are connected to one another.

Should You Buy Crossed Wires?

Crossed Wires is a tale of not judging a board game based on its’ age recommendation. I was afraid that Crossed Wires was going to be a boring game as an upper age recommendation usually means a game is too simplistic to appeal to adults. While the game is pretty simple, it is actually pretty enjoyable for both children and adults. The idea of combining a path following mechanic with a speed game is an interesting and engaging idea. People who like speed games will probably enjoy Crossed Wires quite a bit. The two problems I see with Crossed Wires though is that it is a game that I wouldn’t play for long stretches of time and some players are going to be much better at the game than other people. Crossed Wires is not a fantastic game but I was surprised by how much I enjoyed it.

If you don’t really care for speed games or don’t like the premise behind Crossed Wires I don’t think it will be for you. If the premise sounds interesting to you though, Crossed Wires is worth picking up if you can get a good deal on it.

If you would like to purchase Crossed Wires you can find it online: Amazon