Try to score the most points within three rounds.

Shuffle all of the cards together. Deal out cards to all of the players based on how many players are playing the game.

The rest of the cards form the draw pile. Grab a piece of paper to keep score with.

Each round begins with all of the players choosing one of the cards from their hand that they would like to keep. When everyone has chosen their card, all players reveal the card that they chose to keep. These cards are played out in front of the players.

The next round then begins with each player being dealt the same number of cards that they were dealt at the beginning of the game. At the end of the third round scoring takes place like normal, but the pudding cards are also scored. After all of the scoring is completed, whoever has the most points wins the game.

Here is a short explanation of how each card in Sushi Go! works. 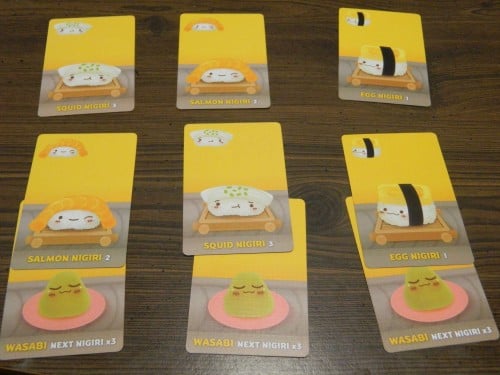 Chopsticks: If a player takes a chopstick card, on a future turn they have the ability to take two cards from a hand instead of one. If a player would like to use their chopsticks to take two cards from a hand they take their first card and before everyone reveals their cards the player says “Sushi Go!” and then takes a second card from the hand. In exchange the chopsticks are put back into the hand before it is passed to the next player. At the end of the round chopsticks are worth zero points. 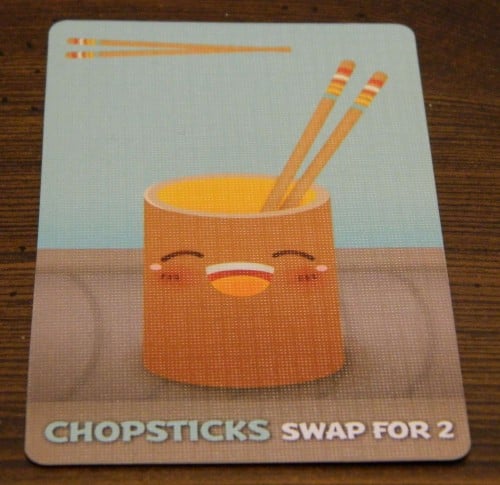 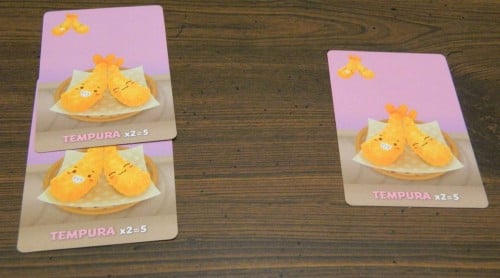 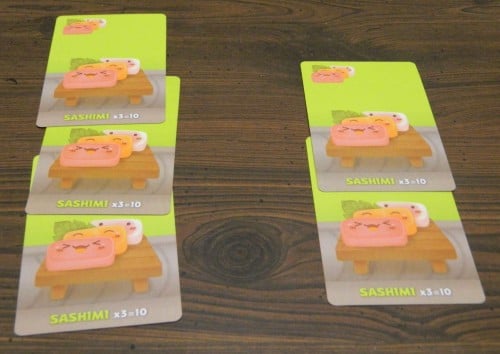 Dumplings: Dumplings score points based on how many you acquire in a round. Points are scored as follows: 1 dumpling-1 point, 2 dumplings-3 points, 3 dumplings-5 points, 4 dumplings-10 points, and 5 or more dumplings-15 points. 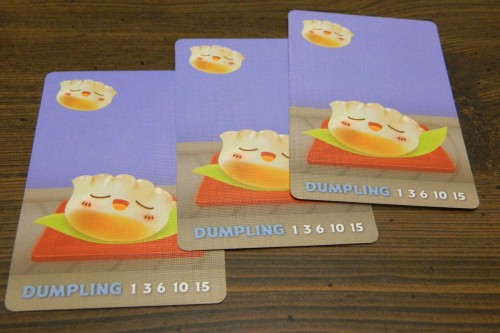 The player has three dumpling cards. This player would receive six points from the dumplings.

Pudding: Pudding cards only score points at the end of the game. All pudding cards are kept from round to round until the game ends. 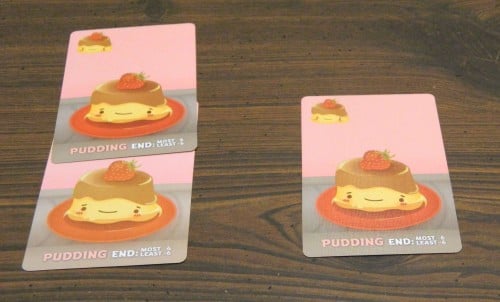 After tallying points for pudding cards, whoever has the most total points wins the game. If there is a tie, the player with more pudding cards breaks the tie. 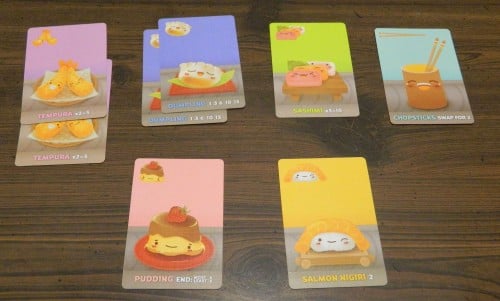 Ever since it appeared on the third season of TableTop, I have wanted to try out Sushi Go! Even before TableTop I heard a lot of good thing about Sushi Go! and the TableTop episode just confirmed what I had heard. The main reason I held off from buying the game for a long time was that the game has always been really cheap so I was looking for a really good deal on the game. After having finally played the game I have to say that Sushi Go! lived up to the hype and is a fantastic example of a simple pick up and play card game that hides quite a bit of strategy beneath the surface.

While I like strategic games, I appreciate a good light to moderate strategy game since they can be engaging while also being accessible to new players. This is the perfect description of Sushi Go. While the game is a light to moderate strategy game it does a great job blending accessibility with options. The game is very easy to play since it only takes a couple minutes to explain and maybe a couple rounds for a player to fully understand. The game is also really quick to play since you can generally finish a game in fifteen minutes. Sushi Go! is a perfect filler game especially for people who don’t regularly play board and card games.

When you first start playing the game you might not think there is a lot of strategy to Sushi Go! While the game is accessible it has plenty of choices to make. The more you play the game the more you see the strategic elements in the game. While playing the game you need to consider what cards you want in addition to what cards other players are looking for. Considering other player’s hands might be more important than your own at times since you might have to take a card that will earn you few points just to prevent another player from getting the card and earning a bunch of points.

Sushi Go! seems so well balanced. Most of the cards in Sushi Go actually play differently while remaining easy to understand. Each card has its’ strengths and weaknesses. Nigiri cards by themselves score less points than the other cards but they are also the safest since you will automatically score points with them. Dumplings are also safe but don’t score a lot of points unless you acquire quite a few of them. A lot of the other cards are more risky but result in bigger payoffs. The wasabi, sashimi, and the tempura require you to get other cards or they are worth zero points. If you get the other cards you need though you will score quite a few more points than if you went with a safer option. Finally the chopsticks are an interesting card since they essentially let you pass on one hand and take two cards from another hand. One player will get stuck with them at the end of the round though and will end up getting zero points for them.

In addition to some great gameplay, the card quality in Sushi Go! is quite good. The card stock is pretty typical of a card game but the artwork is fantastic. I have really no interest in sushi having never ate sushi before and yet the artwork is so charming and really well done. The cards are really well designed with a quick explanation at the bottom of every card that tells you what it does. This helps immensely when you are first learning the game since you can quickly go through the rules and then use the bottom of the cards to refresh your memory of what every card does as you play through your first game.

Although Sushi Go is a really good game it is not perfect and it won’t be for everyone.

While the game has quite a bit more strategy to it than you would first expect, people who like really strategic games will probably find the game to be a little on the light side. Your decisions in the game actually have an impact on what ultimately ends up happening in the game. Good strategic decisions give you an advantage in the game. Except for the first couple of cards each round though, it is usually pretty obvious what card you should take at any given time.

Unfortunately luck has more impact on the game than I would have preferred. If all of the players are of an equal skill level, the winner will probably be whichever player was luckiest. Luck comes into play into two ways. First whoever gets the better starting hands gets an advantage since they are able to take the better cards from those hands. Also getting the first look at the best hand of the round gives you an advantage in deciding which strategy you are going to be implementing for the round.

Sushi Go is a great game. The game is easy to learn, quick to play, and still has quite a bit of strategy to it. While I wish the game relied a little less on luck, unless you hate light to moderate strategy games I think you will really enjoy Sushi Go! On top of all of its’ positives the game is also quite cheap since you can usually find a copy of the game online for less than $10. Unless you don’t like light to moderate strategy games I would highly recommend picking up Sushi Go!

When each game only has 3 rounds how do you get 5 or more dumplings?

This confusion is probably due to me not doing a great job describing what constitutes a round. At the beginning of each round the players start with the number of cards shown in the setup section (between seven and ten). Players take one card and then pass the cards to the player on their left. This continues until all of the cards have been claimed by players. This is the end of the round. You are able to get five or more dumplings in a round because each player will get to take between seven and ten cards each round (depending on the number of players).

Then another round is played with players being dealt the same number of cards as they were at the beginning of the game. Players will once again take cards until all of the cards are taken. One more round is then played and then the game ends.

I am sorry that you were confused by my description of the rules. I am going to edit them some to make this more clear.