How to Play Dr. Microbe

Each round begins with the top research card being flipped over. All of the players play at the same time. Players grab microbes from the petri dish in the middle of the table with their tweezers and add them to the different compartments of their dish. 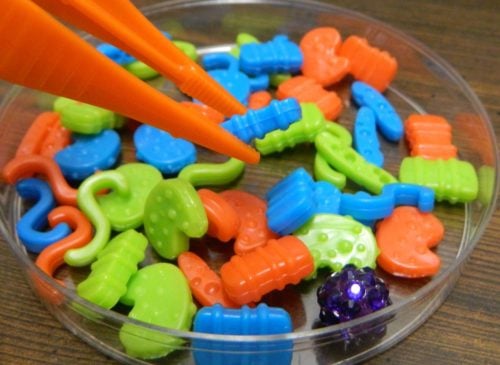 Players must match the correct bugs to the right compartments based on the flipped over card. The players must also fill in the empty compartments following a couple rules: 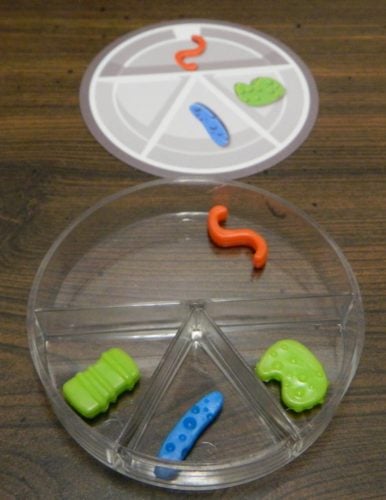 This player has successfully completed the card.

A couple additional rules must be followed in the game:

The first player to collect five cards wins the game.

This player has collected five cards so they have won the game. 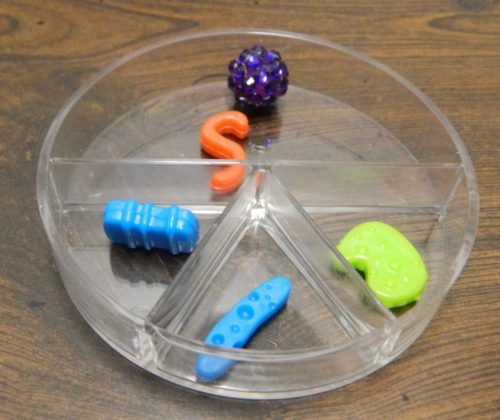 This player has the purple virus in their tray so they are unable to claim the card.

The other variant rule allows players to sabotage the other players. With this variant rule players are able to add microbes to their opponent’s dishes. The only way players can get rid of unwanted microbes from their dish is to place them back into the large petri dish in the middle of the table. 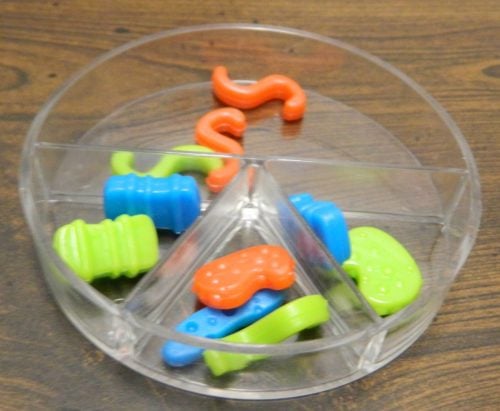 This player has been sabotaged by another player(s). The player will have to get rid of some of their microbes by placing them back into the dish in the middle of the table.

My Thoughts on Dr. Microbe

Just like with the other games in the Dr. Collection, Dr. Microbe is a family board game built around scientific equipment. As I pointed out in the other reviews, I love the concept behind the Dr. Collection. The games might not teach any real science concepts but it teaches reasoning skills and might work in getting children interested in science. I really commend Blue Orange Games for using a science theme in a game whose first goal is just to be fun.

Having played all three games in the Dr. Collection I would have to say that Dr. Microbe is probably the most unique of the three games. Other than the theme the games share the concept of looking at a goal card and trying to replicate it using your own equipment. Otherwise Dr. Microbe plays quite a bit differently than Dr. Eureka and Dr. Beaker. Instead of figuring out how to move the balls around, Dr. Microbe focuses on figuring out which microbes have to be placed into the empty spaces of the petri dish. Once players have figured out what microbes they need, they have to use their tweezers to pick up the corresponding microbes and place them in the corresponding spaces in their petri dish. While the gameplay shares some similarities with the other games, Dr. Microbe does play quite a bit differently than the other games in the franchise.

Compared to Dr. Eureka and Dr. Beaker I would say that Dr. Microbe is probably the simplest of the three games. Dr. Microbe forces players to put some thought into figuring out what missing microbes they have to add to their petri dish. While it is pretty easy to figure out what microbes can be put into the smaller compartments, you need to put some thought into figuring out the superbugs. I think the game will give children enough challenge while avoiding frustration. As far as adults are concerned though I think the game is less challenging than the other two games since once you are familiar with the game it is not that hard to figure out which microbes to put in the empty spaces.

While Dr. Microbe might play quite a bit differently than the other games in the series, it still keeps the most important factor, fun. The game may not be for everyone but if you like these type of games I would be surprised if you didn’t enjoy Dr. Microbe as well. Dr. Microbe is the type of game that the whole family can enjoy. While serious strategy gamers probably won’t like the game, I see parents enjoying the game with their children. Adults that like these type of games can probably still enjoy the game even if they don’t play it with their children.

I would probably say that the biggest problem that I had with Dr. Microbe is the fact that the game can get a little too hectic at times. While it takes some thought to figure out what bugs you need to place in your dish, the biggest challenge in the game is just getting the microbes you need from the dish in the middle of the table. The problem is that the dish is pretty small so if you have four players going for microbes at the same time their hands will regularly get in each other’s way. Most of the time you will have to fight one or more players over the microbe you both need. Player’s hands and arms can also get in the way of the current card which will block some people from seeing it. I wouldn’t mind the chaos if it happened occasionally but it seems to be constant.

I am not sure what the best option would have been to reduce some of the chaos in the middle of the table. Using a larger petri dish might have helped some as there would be some distance between the microbes which might cut down on the congestion. Another option might be to give each player a holding dish that would hold one of each type of microbe. If you would use this variant players would no longer have to fight over the microbes. The game would be focused entirely on players figuring out which microbes to place and placing them as quickly as possible. This would reduce some of the competitiveness though which might adversely affect the game.

The other variant rule is basically what I like to refer to as the free-for-all variant. Basically this rule lets players mess with the other players by throwing microbes into their dishes in order to distract them. At first I thought this would be a fun way to mess with the other players but it breaks down pretty quickly. The problem comes from the fact that there are no rules on how many or how often a player can add microbes to the other player’s dishes. If a player really wanted to they could just throw a bunch of microbes into the other players’ dishes and while they are distracted getting rid of all of the microbes, finish their own dish. When players abuse this ability, the game is no longer fun. Now if you would create some house rules regarding the number and/or frequency of adding bugs to the other players trays, I think this variant could be pretty fun.

As far as the components are concerned they are fine for an affordable children’s game. The bugs are rubbery and durable where I don’t see them being damaged from excessive play. The game also comes with plenty of goal cards. You will repeat cards but there is no way you will ever be able to remember any individual cards. The trays and tweezers are only made of plastic but they feel durable enough that they should last. The components aren’t fantastic but they serve their purpose and are perfectly fine for the game’s retail price.

Before wrapping up I might as well give my thoughts on how Dr. Microbe rates with regards to the rest of the Dr. Collection. In my opinion Dr. Microbe is probably the worst game in the collection. It is still enjoyable but I found the mechanics in Dr. Eureka and Dr. Beaker to be more enjoyable. The reason I preferred the other games is because I liked figuring out how to move the balls around in order to match the cards. In Dr. Microbe it is more about figuring out what microbes you need and moving them to the corresponding spots in your dish with your tweezers. When you add in the chaos of having to sometimes fight over microbes, I just don’t think Dr. Microbe was quite as enjoyable as the other two games.

Should You Buy Dr. Microbe?

Like the rest of the Dr. Collection series of games, Dr. Microbe is a fun family game with a science twist. The game is quick and easy to play. While the game isn’t super challenging for adults, the game provides enough challenge to children without being overwhelming. Dr. Microbe can get a little chaotic at times but the game can be enjoyed by both children and adults. I will admit though that I enjoyed Dr. Eureka and Dr. Beaker more than I enjoyed Dr. Microbe. I still had quite a bit of fun with the game though.

If you would like to purchase Dr. Microbe you can find it online: Amazon

Thanks for this, Ive been looking at the group of blue orange games deciding which one to buy to start my daughter gaming early, I was leaning towards the only one you haven't reviewed though (go go gelato) haha.

Sounds like Dr Eureka is the best one to get so far though, very thankful for all the work in these reviews.