A while back I looked at the Blue Orange Games board game Dr. Eureka. In Dr. Eureka players control three test tubes and a set of different colored balls. The goal of the game is to rearrange the balls between the three test tubes to match the card face up on the table. After the success of Dr. Eureka, Blue Orange Games decided to branch out and make Dr. Eureka into a series of games called the Dr. Collection. Today I am going to look at the third game in the Dr. Collection, Dr. Beaker. While not quite as good as Dr. Eureka, Dr. Beaker does a good job utilizing the scientist theme to create an interesting and fun experience.

How to Play Dr. Beaker

Each player takes a beaker, a stirring rod and eight balls (two of each color). Drop the balls into the beaker and make sure one ball is in each outer compartment. Shuffle the cards and place them face down on the table. 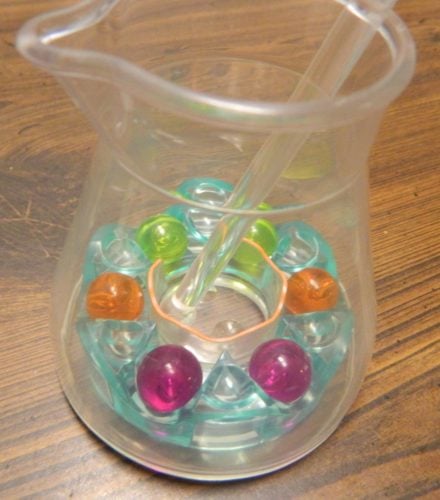 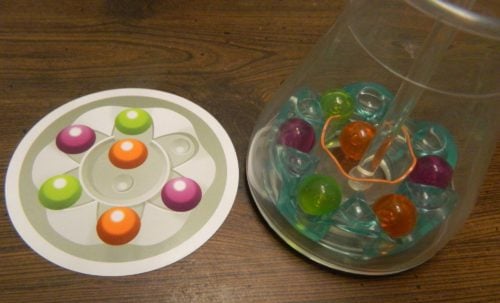 This player has matched the card. They will yell out Eureka and will score points based on what position they finished in.

A player wins the game when they have earned ten cards. 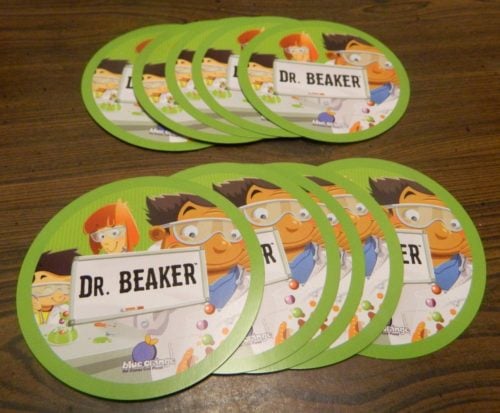 This player has acquired 10 points/cards so they have won the game.

The basic gameplay remains the same in the team play variant. The players break into teams of two. One player from each team will act as the lab technician and the other will play as the chemist. The lab technician looks at the card and describes it to their teammate. The chemist is the only player allowed to use the beaker and stirring rod. The team that completes the card first gets to take the card. The first team to get five cards wins the game. Between each round the players switch roles.

The other option is to have one player from each team take four cards from the top of the deck. Each player chooses three of the four cards to keep and can arrange them in any order they prefer. The other players then race to complete the three cards first. Whoever completes the three cards first wins the round. For the next round each team member switches roles. The first team to claim five cards wins the game.

Just like with Dr. Eureka, I would classify Dr. Beaker as a speed dexterity game. In Dr. Eureka the gameplay revolves around figuring out how to move the balls between the three test tubes in order to rearrange the balls to match the face up card. In Dr. Beaker you are still rearranging the order of balls in a beaker but the dexterity mechanic of the game is quite a bit different. Instead of pouring balls from one test tube into another, you have to use a stirring rod in order to move balls around the bottom of the beaker to match the top card.

While playing Dr. Beaker I was reminded quite a bit of Dr. Eureka. Just like Dr. Eureka, Dr. Beaker is a quick little dexterity game that is a lot more fun than most people would think. Looking at the box most people would probably assume that the game is only meant for children and their parents. While I think most children and their parents will really enjoy the game, I actually think Dr. Beaker is a game that adults could also really enjoy. Like most of the best children’s games Dr. Beaker is easy to learn and play and yet provides enough challenge to keep adults interested. You might look a little silly playing the game but I think most adults who like speed and dexterity games will get quite a bit of enjoyment out of Dr. Beaker.

While Dr. Beaker has less reliance on dexterity, I think it has a higher reliance on spatial recognition. Dr. Eureka relies on spatial recognition as you need to figure out how you can move the balls between the three test tubes in order to change their order. The thing is I never found it to be that difficult figuring out how to manipulate the order of the balls. While the thought process of reorganizing the balls is pretty similar in Dr. Beaker, I actually think it requires more thought figuring out how to rearrange the balls. I attribute this to there only being two spots for balls in the middle compartment (it can sometimes also hold a third ball). While it might just be easier to move all of the balls to the middle and start fresh for some cards, the middle can’t hold enough balls to let you do it. Therefore you need to keep a lot of the balls in their outer compartments and work around them. This isn’t really a problem but it does require more spatial awareness in my opinion than Dr. Eureka did.

One thing Dr. Beaker has that Dr. Eureka doesn’t are team mechanics. Basically the team mode has one player acting as the eyes while the other player acts as the hands. One player gets to look at the card and has to guide their teammate by telling them how to rearrange the balls. Meanwhile the other player plays the game like normal but doesn’t get to see the card. While these team mechanics don’t drastically change the game, they are an interesting addition to the game. Basically the team mode adds a communication mechanic to the game. The player that is looking at the card has to be descriptive with their directions to the other player. If the player doesn’t give good directions this could lead to quite a few problems and potentially some laughs as the player has no idea what they are supposed to do. If the player does a good job giving directions though things should move pretty smoothly.

While Dr. Beaker is a fun game it does have a couple issues.

The first issue I had with Dr. Beaker was with the scoring system. I don’t like the idea that all of the players except for the last player receive points each round. At most only the first and second player should receive points. Personally I think it would be better if only the first place finisher received points. By giving most of the players points every round, the player who finishes first barely gets more points than the rest of the players. Also with players getting up to three points each round, the game can end really quickly. Honestly I would just play the game where just the winner gets the card and the first player to five points wins the game.

The other issue I have with Dr. Beaker comes from the components. Overall there is a lot to love about Dr. Beaker’s components. All of the pieces are made of plastic but are of a high quality. Being a family game it is good that the components are solid enough that they should be able to take a lot of wear before they adversely impact gameplay. There really is a lot to like about the components but they occasionally let down the game.

The other problem with the components is I wish the inner compartment comfortably held more than two balls.. While the middle of the beaker can theoretically hold three balls, when you add a third ball to the center you can run into problems. When there are three balls in the center area it is pretty hard to move the balls around without having one of the balls fly out the top of the holding area. When the balls fly out of the center they tend to really mess with what you are trying to do. The more you play the game the more likely you can avoid this problem but it is still kind of annoying when it happens.

While I don’t think Dr. Beaker is quite as good as Dr. Eureka, I still think it is a good game. I have to compliment Blue Orange Games on the Dr. Collection as a whole. I like it when children’s board games are designed to be enjoyed by all ages. I also really like that the Dr. Collection utilizes the scientist theme. While the gameplay is not particularly scientific I give the designers credit for creating unique gameplay experiences utilizing scientist equipment. After playing two different games in the series I have to give the series credit for creating unique experiences with each game. Both Dr. Eureka and Dr. Beaker are gameplay experiences that are quite different than anything else I have ever played.

Should You Buy Dr. Beaker?

While Dr. Beaker is not quite as good as Dr. Eureka, it is still a good speed dexterity game. While kids should enjoy the game, Dr. Beaker is the type of games that adults can also enjoy quite a bit. While Dr. Beaker is quite simple, it is hard to deny that it is a fun experience. It is not something that I would play for hours at a time but I can see coming back to it every so often. The only real issues I had with the game were with the scoring system which can be easily fixed and I wish the balls wouldn’t pop out of the middle compartment so easily. Otherwise Dr. Beaker is an enjoyable and unique experience.

If you would like to purchase Dr. Beaker you can find it online: Amazon