Place all of the chairs on the table. Before the game begins decide how many rounds you want to play. The youngest player gets to start the game.

During a player’s turn they choose one of the chairs and place it on the stack of chairs in the middle of the table. The first player just needs to pick a chair and set in the center of the table. Every other chair needs to be placed somewhere on the other chairs in the stack. The only rule when placing a chair is that the only chair that is allowed to touch the table is the first chair that was played. After a player has played a chair, play moves to the next player. 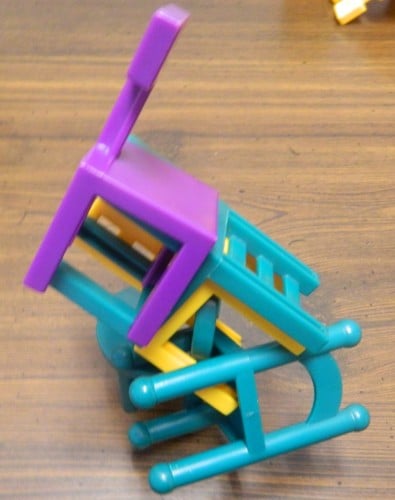 The players have played several chairs to the stack. Any placement is legal as long as only one chair touches the table. 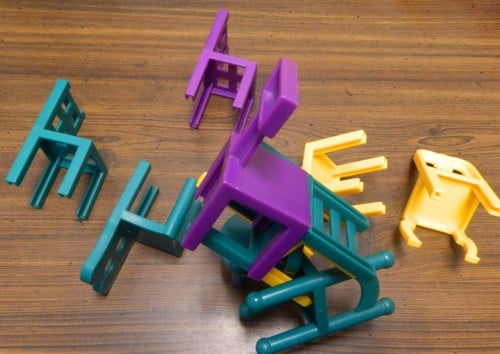 With the last placement five chairs fell off the stack. The player who knocked off these chairs will incur five penalty points.

The game ends when the agreed upon number of rounds are completed. The player with the fewest penalty points wins the game.

A variant of the main game has each player take the same number of chairs. The game plays the same as the normal game. When a player knocks chairs off the stack, they must add all of the chairs that fell to their stack of chairs. The first player to get rid of all of their chairs first wins the game.

Ever since Jenga revolutionized the dexterity/stacking genre in 1983, many designers/publishers have tried to create their own spin on the genre. Most of these games fail to really distinguish themselves as most of them play exactly the same with only slight differences.  Chairs isn’t the most original dexterity game but it is probably one of the better stacking games that I have played.

Chairs is your typical stacking/dexterity game. If you have played games like Jenga before you know what to expect out of the game. Players take turns trying to stack another chair on top of the other chairs without knocking over the stack. Chairs doesn’t really stray too far from the stacking game formula. Chairs is one of the better stacking games that I have played but isn’t enough to change someone’s negative opinion of the genre. If you like stacking games though you should look into picking up Chairs.

Like all stacking games, Chairs is not a complicated game. The rules take minutes to read and maybe a minute to explain to new players. The game has a recommended age of 5+ which is appropriate since young children won’t have a problem understanding the game. Kids at the lower end of the range though may have some struggles with the dexterity portion of the game.

Chairs is a game that is really flexible with regards to length. Since you can play as many rounds as you want, you can make the game really short or really long based on how many rounds you decide to play. This flexibility is good since it allows you to play the game no matter how much free time you have. The short length is good since Chairs is not the type of game that I would play for long stretches of time. I would probably play it for 10-15 minutes and then put it away to play some other day. While some people could play it for hours at a time, for most people Chairs is the type of game that you would only want to play for short periods of time.

The main reason Chairs is better than a lot of stacking games is that the game gives you a lot of choices on how you want to build the stack. For example in Jenga you can only take a block from a lower section of the tower and add it to the top of the tower. In Chairs the only rule is that only one chair can touch the table. This gives players a lot of options on how they want to stack their next chair. They can place the seat of one chair on the seat of another chair. Players can stack chairs on their legs. They can even stuff the chair legs in the holes of other chairs. You can let your creativity run wild in Chairs which gives the game replay value and makes it better than a lot of the other stacking games.

Like most dexterity games, some players are going to be better at the game than others though. The game may get boring if one player is considerably better at the game than the other players. People who are generally terrible at stacking games are likely to struggle with Chairs since while you can create a large stack of chairs, it is quite easy to knock over the chairs if you don’t have steady hands. The game will likely be more enjoyable if all of the players have equal stacking skills. The stack of chairs can get pretty impressive if all of the players are good at dexterity games.

This level of skill can come into play since it is actually quite easy to set up the next player for failure. Really skilled players can set up the next player by playing their chair in a position that doesn’t topple over the tower but makes it so unstable that there is no where that you can safely place a chair without knocking over the tower. This means that turn order can be really important in Chairs. If you play after the most skilled player you are going to have a hard time winning the game.

While the basic game rules provide a satisfying game, Chairs is the type of game that could benefit from some interesting house rules. Adding creative rules on how chairs can be stacked/picked up has the potential to add a lot to the game after you get sick of the regular rules.

Chairs’ components are pretty good. While the chairs are made of plastic (I would have preferred wood), they are quite detailed and well made. The game could have easily just made a bunch of bland chairs that all looked the same. Work was put into the design of the chairs though as the chairs feature different designs which actually give you different options on how you want to stack the chairs. The chairs are quite sturdy which is important since the pieces will be regularly falling which could have been a problem if they were flimsy and easily broke.

Chairs is pretty much your typical dexterity/stacking game. You stack chairs on top of one another hoping not to be the player that knocks over the stack. Chairs is quick, simple, and fun to play. The different chair designs give players a lot of options in how they want to add chairs to the stack. This gives Chairs more replay value than a lot of dexterity games. Unfortunately Chairs doesn’t really differentiate itself much from other stacking games.

Chairs is probably one of the better stacking games that I have played but it is not good enough to make someone like  stacking games that otherwise doesn’t like the genre.  If you like stacking/dexterity games though you should enjoy the Chairs game. If you would like to buy Chairs you can purchase it on Amazon here