Each player takes a set of gate receipt tokens ($10, $7, $5, $3), a scoring token and a organizing chart. The first dealer is the player who most recently visited the circus. In subsequent rounds the role of the dealer passes to the next player to the left. The dealer deals out all of the cards even if one player ends up with more cards than another player.

Before each round begins the players look at their cards and place their gate receipt tokens on their organizing chart. One token is placed face down on each suit/picture. Players want to play their higher valued tokens on the suits that they feel they will most likely be able to play all of their cards from. For example if a player only has a couple low cards of a suit they probably should put their $10 token on that suit. 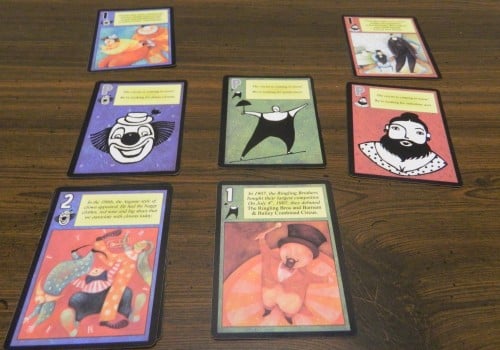 Each player’s turn starts with them sliding each called card (card placed on the organizing chart) down one slot (if possible). Once a card is at the 0 position it can no longer be slid further down. Players will then take one of the following actions: 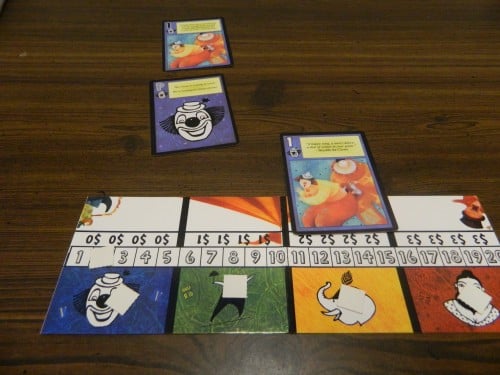 This player currently has one called card. Since this card can be played, the player is forced to play it for their turn.

If you did not play a called card you have two options.

Your first option is to play a card from your hand to one of the piles in the center of the table. Cards can only be played to a pile if it is the next card for the pile that matches the suit and shade (light or dark). For example if there is a light one card with a green background, a player can play the light two card with the green background. When playing a card in this way you check the cards on the other players’ organizing charts for called cards. If any players’ chart (other than your own) has a card that matches the suit and shade of the card you played you will receive points based on which space on the organizing chart that the card is placed on. For example if the card is on the three space you receive three points which are marked on the score tracks in the center of each board. You can score points from two or more players if multiple players have cards that match the suit and shade. If you play a poster card you score points for all cards of that suit on players’ organizing charts. 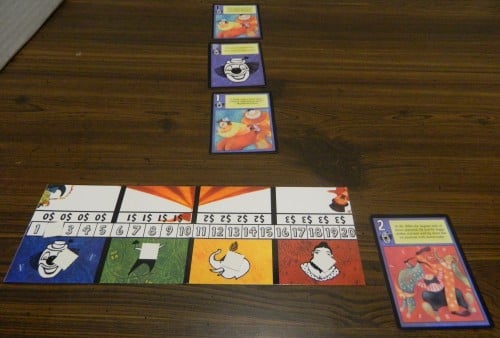 This player has the blue light two card in their hand so they decide to play it. If any players have a blue light number card called, the current player will receive the corresponding money for those cards.

A round ends when one player has played their last card (from hand and organizing chart). The player who won the round gets 25 points and all of the points from their scoring track. All other players will receive the points from their scoring track as well as the money from their gate receipt tokens played on the suits they were able to play all of their cards from (from their hand and organizing chart). Each player’s score is recorded on a piece of paper and everything including the players’ scoring markers are reset for the next round. 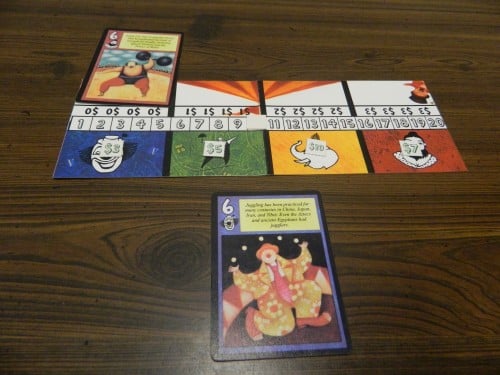 The game ends when everyone has been the dealer once. In a three player game everyone gets to be the dealer twice. Whichever player has scored the most points between all of the rounds wins the game.

In Big Top you play as a circus manager. You need to invest in various circus acts to create the most successful circus. Even though I am not particularly interested in the circus theme, I was intrigued by Big Top and decided to try out the game. Big Top has the makings of a great game which it doesn’t quite live up to due to a high reliance on luck.

Big Top is a pretty simple game. The instructions take a while to get the hang of but once you start playing the game it is quite simple. The game probably takes minutes to teach, and the game is simple enough for children and non-gamers.

The game Big Top is based off the traditional card game Fan Tan/Sevens. Fan Tan is played with a standard deck of cards where the first cards played from each suit are the seven cards. Players can then play cards above and below the seven. The unique mechanic that Big Top adds is the ability to call cards. This is a really interesting mechanic since there are beneficial reasons to call and not call a card. Calling cards gives players a reason to play a card that they otherwise would have held onto. This helps players that have high cards since they can “bribe” the other players to play the cards that they need played in order to get rid of their cards. You usually aren’t going to want to call a card when you don’t have to though since you can end up giving up a lot of points to the other players.

Strategy can be more important in the game than you would think because if you play your cards right, you can actually get the most points in a round even if you aren’t the player to get rid of all of your cards first. If you play your cards right you can score a lot of points off other player’s called cards. A player can hold a suit/shade combination hostage until multiple players call that color. They can then take advantage by playing the card that they held to stall the other players. In my most recent game a couple players were able to score over 20 points just by taking advantage of other players called cards.

One problem with Big Top is that the game runs a little long. The game only takes around an hour but it would probably be better as a 30-45 minute game. There really isn’t a way to shorten the game. The rounds go pretty quickly by themselves and you really need to let every player be the dealer once because otherwise some players could get an unfair advantage in the game. The more you play the game the quicker it will play but it still drags a little.

Big Top’s biggest problem is that the game can have a very high reliance on luck. A lot of games rely on luck but the luck in Big Top can eliminate players due to no fault of their own. In most card games almost all of the cards have positives and negatives. That is not the case in Big Top. There is no benefit to having higher numbered cards. First it is harder to get rid of the cards since you have to wait for all of the earlier numbers to be played before you can play a higher number. High cards also give you little to no opportunity to get points from other players.

This reliance on luck means that your fate in a round can be decided before it even begins. The cards you are dealt are likely to decide how well you can do in a round. For example if you have terrible luck and get a bunch of sixes, you won’t win the round and will likely not get many points. If one player would somehow get all of the six cards it is impossible for them to win the round. On the other end of the spectrum if all of your cards are low numbers you are almost guaranteed to win the round because all of your cards will be easy to play and by holding the low cards you will prevent the other players from being able to play their cards.

The biggest problem with the luck is that it doesn’t just ruin one round, it can ruin the whole game for one player. In the most recent game that I played, I played well in the first two rounds and was actually winning. I was also solid in the fourth round. It didn’t matter since my third round was absolutely terrible. I ended up getting dealt half of the six cards and maybe three or four of my thirteen cards were threes or lower. I knew before the round began that I had no chance at winning the round which was definitely true. I was only able to get rid of two of my suits and lost the round to every other player by at least twenty points. Since I held all of the high cards all of the players were able to get rid of almost all of their suits. Also since I had only high cards I had to call a bunch of my cards which let all of the other players score a bunch of points off my cards. This round took me from first to last. I was so far behind that there was no way that I could catch up. This probably doesn’t happen often but it sucks when a round destroys your chances at winning the game due to no fault of your own.

The component quality for Big Top is really hit and miss. I actually really liked the game’s artwork and if you like the game’s circus theme you should really enjoy it as well. The problem though is that it takes up a little too much of every card. It would have been nice if the card’s number were put in all of the corners and with the pictures being so big there isn’t a lot of space that displays the card’s suit. The card quality is also not the greatest since the cards get kind of sticky. The scoring tokens and gate receipt tokens are also really thin cardboard and feel cheap. The instructions aren’t the clearest and it takes some time to figure out how to play the game. If the instructions didn’t include the example at the end, I wouldn’t have known how to play the game. The components don’t ruin your enjoyment of the game but they could have been better.

Big Top has the makings of a good/great game. The game is easy to play but still has more strategy than you would think. Big Top is fun to play and is a game that I would occasionally play. The one thing that keeps the game from being great is its reliance on luck. Card draw luck can either let a player win almost automatically or give a player no chance to win a round. Big Top also runs a little long and the components aren’t the greatest quality.

If you hate luck in games, Big Top will drive you nuts. If you can forgive the reliance on luck though you can have fun with Big Top. If the game looks interesting to you I think you should look into picking up Big Top. If you would like to purchase Big Top you can purchase it on Amazon here