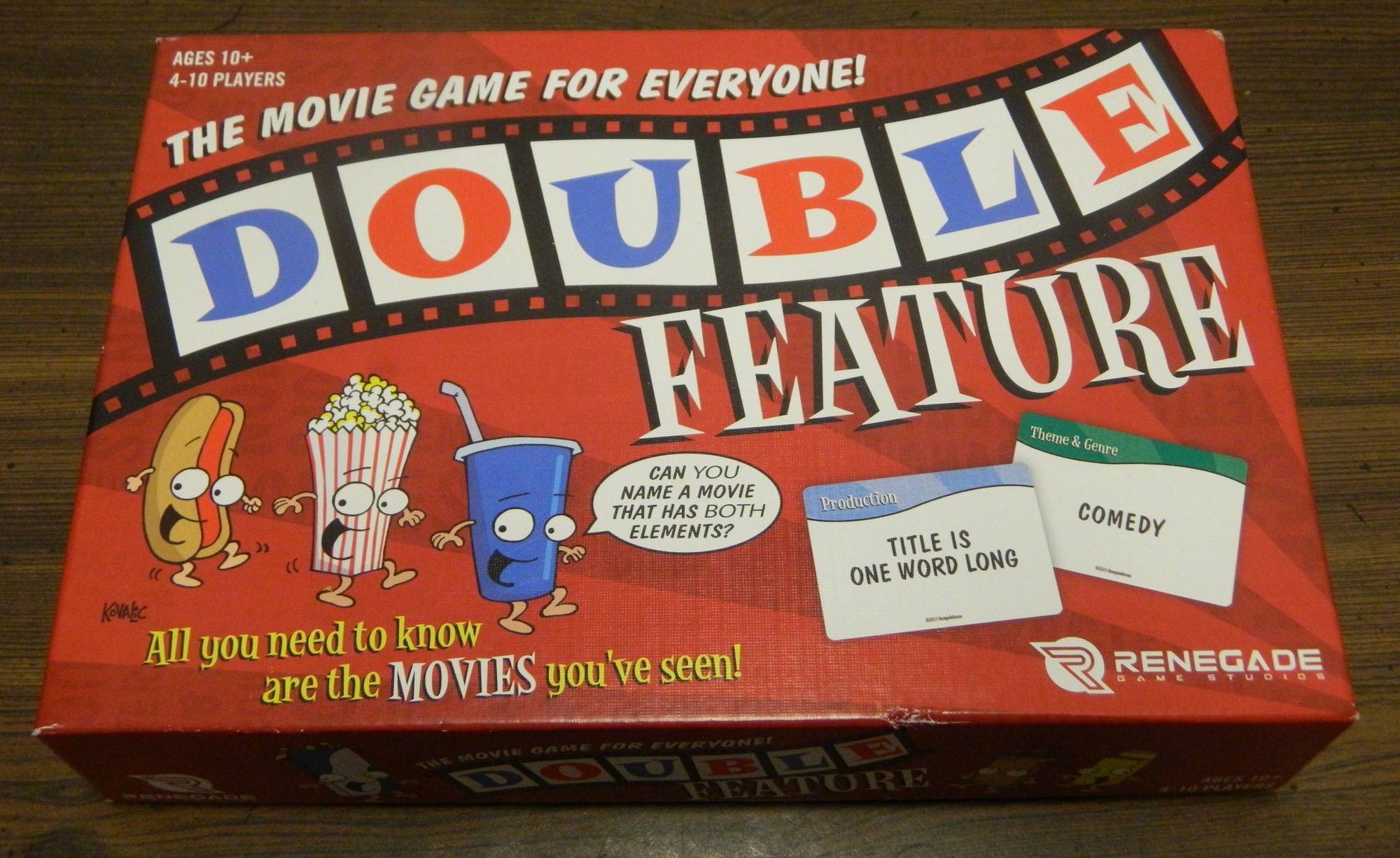 How to Play Double Feature

At the beginning of each round the director will chose a card from one of the six categories: characters, props, production, scenes, setting, theme & genre. The new card’s category must be different than the card already face up on the table. The director reads the category and the word(s) on the card out loud and places the card face up next to the other card currently in play.

All of the players, outside of the director, look at the two cards and try to think of a movie that connects the two cards in play. When a player comes up with a movie, they say the name of the movie out loud. The director determines which player was first to come up with a movie that fits both cards. There are a few rules regarding which movies can score points and which can’t.

The player who came up with the movie gets to take the card that has been out on the table longer, which will count as a point. After the player takes the card, the role of director pass to the next player clockwise. An alternative rule can be used where the player who scored last has to be the director for the next round.

If none of the players are able to come up with a movie that fits the two cards currently on the table, the director can turn over another card. The new card must be from a different category than the other two cards. The players then have to come up with a movie that connects two of the three cards. When a player comes up with a valid movie, the card that has been out the longest and was used for the movie is given to the player that came up with the movie. The card that was not used for the movie is shuffled back into the corresponding deck.

If the players are unable to come up with a movie between the three cards, the director shuffles all three back into their corresponding piles. The director then draws two new cards and the round continues.

The game ends when a player has scored enough points to win. The number of points needed to win the game depends on the number of players:

My Thoughts on Double Feature

At its core Double Feature is a movie trivia game even though it is not your typical trivia game. The problem I have with traditional movie trivia games is that they usually ask pretty specific questions about a particular movie. If you have seen the movie and have a good memory of it, you have a good chance of knowing the answer. If you have never seen or barely remember the movie though, good luck ever getting the question right. What Double Feature and Cineplexity do right is that they remove this barrier. A player no longer needs to have seen a specific movie in order to answer a question.

Instead of knowing specific facts about movies, Double Feature tests players on whether they know a little about a lot of different movies. Basically all you need to know about a movie in Double Feature is the basic plot and maybe some key scenes. You technically don’t even have to see a movie for it to come into play in Double Feature. The gameplay revolves around finding movies that feature the two elements that were drawn for the round. The first player to name an appropriate movie scores the point.

What I really like about Double Feature is that the game is quite a bit more accessible than your typical movie trivia game. If your group has any interest in movies, I think they could have fun with Double Feature. The game is quite simple where I think it would take most people only a couple minutes to explain it to new players. This is important as the game is better with more players. You could technically play the game with as few as two players (which I have tried), but I would recommend playing the game with as many players as possible. I can see Double Feature appealing to more people than a typical movie trivia game as you don’t have to be a movie buff to have a chance in the game. If you have seen a decent amount of movies, you have a chance in the game as you don’t need to know anything really specific about any movie. The player who has seen the most movies has a pretty big advantage in the game, but they are not guaranteed to win the game. If you don’t watch a lot of movies though, you probably don’t have a good chance of winning the game.

In addition to testing your movie knowledge, Double Feature also tests your speed. It doesn’t matter how many movies you know if you aren’t quick to answer. The player who answers correctly first wins the point. Being able to come up with an obscure movie that perfectly fits the two cards doesn’t matter if another player is able to quickly give an acceptable answer. In some rounds it will take some time for someone to come up with a movie that actually fits. In a lot of rounds though you will have to answer quickly in order to beat the other players.

For the most part I would say the cards work quite well. You would think that it would be pretty hard to come up with a movie based on two random elements. If you have seen a decent amount of movies though, you would be surprised how quickly a movie can come to your head. Most of the time you won’t have an issue coming up with a movie title. Some players may disagree about whether it should count, which can lead to some arguments. There occasionally are times where you will have to pull out the third card as no one can come up with a movie that fits the cards on the table. For example in our game we were supposed to come up with a movie that features time travel or a countdown along with lions, tigers or bears. If anyone has heard of a time travel movie that features lions, tigers or bears; I would love to hear about it in the comments as that is a movie that I would love to watch. These situations occasionally come up which slow down the game, but they don’t come up as often as you would initially think.

I would say that the biggest problem that I had with Double Feature is with the components. I thought the component quality was pretty good. The cards are pretty thick. I really like the artwork which is not surprising since it was done by John Kovalic. The only complaint I have with the artwork is that I wish there was more of it as the text side of the cards is pretty dull. The biggest problem that I had with the components is that I don’t think there are enough of them. Double Feature only has 120 cards which is not a lot. You likely will never have to repeat a card pair with all of the different possibilities, but I still think the game could have come with some more cards. Cineplexity had over 300 cards. While this is disappointing, you could easily make your own cards for the game if you ever get sick of the cards that come with the game.

The other somewhat significant issue that I had with Double Feature is that I think a few of the rules could be slightly tweaked. It just feels like there is something slightly off with the game where you might want to tweak a few rules here or there. For example one rule I don’t care for are the rules regarding which movies can and can’t be used in the game. I am guessing the rule that bans TV movies was done to prevent players from making up random TV movies that no one has ever heard of before. In action though I don’t think it is a great rule as I think it would be fun playing the game allowing TV movies, TV shows, and miniseries to be named. This is not that big of deal as you can easily just allow these to be used as it doesn’t impact the gameplay.

Another house rule you may have to add to the game is banning certain movie franchises from being used in the game. As you are likely going to play the game with people that like the same type of movies, it is likely that some movies/franchises are going to be repeated over and over again. While you can’t use the same franchise two times in a row, players are likely going to keep coming back to the same franchise over and over again. In our game Star Wars and Harry Potter were particularly popular as they surprisingly work for quite a few of the cards. The main reason why I would consider banning popular franchises for your group is that it gets a little repetitive having people repeat the same answers over and over again.

One final thing I think Double Feature chould have done would have been to include a couple additional ways of playing the game. With how straightforward Double Feature is, it would not be that difficult to add some house rules to the game. One rule that we came up with while playing the game is give all of the players a set amount of time to come up with a movie that fits the two cards. Each player could then name their movie and explain why it is the best fit for the cards. After everyone has announced their movie, the director could decide which movie fits the cards the best.

Should You Buy Double Feature?

While Double Feature may just be another movie trivia game, I think it is better than most movie trivia games. Instead of just asking you generic trivia questions, players have to come up with a movie that features the elements found on two cards. I think this is a much better way of approaching a movie trivia game as it doesn’t force players to know specific movies. Instead players only need to know a little information about a lot of movies. This makes the game a lot more accessible in my opinion, as anyone who has watched quite a few movies has a chance to be competitive in the game. In addition to testing your movie knowledge, Double Feature also tests your speed as it only rewards the player that is able to come up with the first answer. I enjoyed my time with Double Feature. The only real problems that I had with the game is that it is basically the same game as Cineplexity, the game could use some more cards, and a few rules here and there could use some tweaking.

If you would like to purchase Double Feature you can find it online: Amazon