One of the most popular board game genres of all time is the roll and move game. Basically the main mechanic in these games is rolling a die/dice and then moving your playing piece around the gameboard. It is not that surprising that the genre is popular since it is so straightforward. Over the years some designers liked the idea behind roll and move games but wanted to try something new. This experimentation lead to what I like to call “roulette” games which use the mechanic of rolling a marble around the gameboard like a roulette wheel instead of rolling a die/dice. We have actually looked at a couple games that used this type of mechanic in the past here on Geeky Hobbies (The Magnificent Race, ROLLette). Today I am looking at another one of these roulette games which is named Don’t Upset Me. Don’t Upset Me deserves credit for using a unique roulette mechanic but fails to differentiate itself from so many other roll and move games.

How to Play Don’t Upset Me 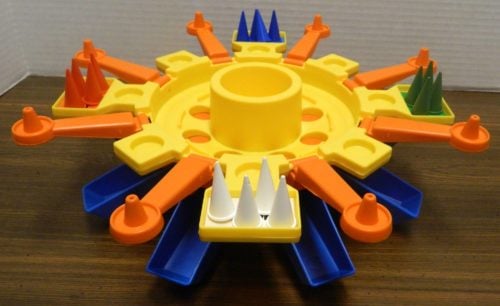 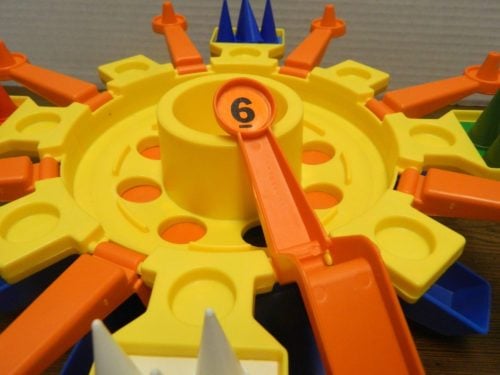 This player has flipped over the six flipper so they will get to move one of their pawns forward six spaces.

A player chooses any one of their pawns and starts moving it clockwise around the gameboard until they move the number of spaces indicated by the flipper that was flipped. A player can have multiple pawns on the gameboard at the same time. When moving count both the safe spaces and the spaces on the flippers. If a player lands on a flipper space, the piece is in danger on future turns. If a pawn lands on a space occupied by another player’s pawn, the other player’s pawn is sent back to their home. A player cannot land on a space occupied by one of their other pawns. 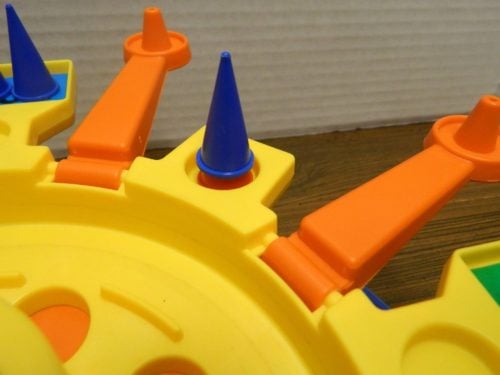 The blue player landed on the same space as the red player. The red player’s pawn will be sent back to their start space.

If the steel ball knocks over a flipper that has the joker underneath, the player gets to take a special action. If there is currently a pawn on one of the flippers, the player can choose to drop the steel ball on any of the occupied flippers. This will eliminate the piece from the game and the current player moves the number of spaces indicated on the flipper. If there are no pawns on a flipper, the player does not get to move on this turn. 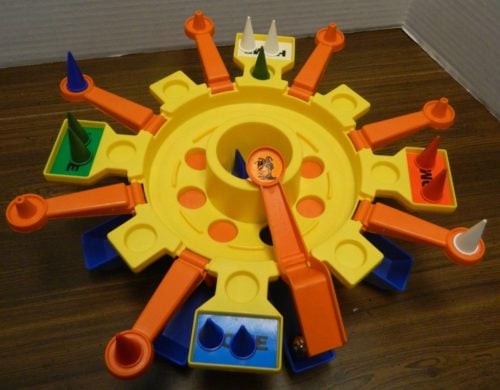 This player has flipped the joker lever. They can either flip the lever that has a red, blue, or white pawn on it.

The game ends when one of the players has moved one of their pieces around the entire board and back to their home. The pawn does not have to return home by exact count. This player has won the game. 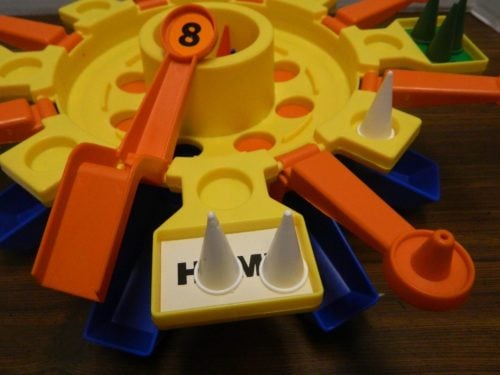 This player has gotten an eight which will get their pawn back to their home. The white player has won the game.

My Thoughts on Don’t Upset Me

When you see Don’t Upset Me the first thing that likely will stand out to you is the roulette mechanic. Instead of rolling a die/dice to move around the board, you will be spinning a marble and waiting for it to drop into a hole which will tell you how many spaces you get to move. I have to admit that the mechanic intrigued me since it made what otherwise would have been another bland roll and move game into something that looked quite a bit more interesting.

While the roulette mechanic is pretty superficial, I have to admit that it is kind of fun. The results of rolling the marble is basically the same as rolling a dice but it is more enjoyable. For some reason this mechanic is surprisingly enjoyable. This mechanic is enjoyable enough that ROLLette built an entire game around rolling marbles around a gameboard. Outside of it being an overly complicated way of randomly selecting a number, I wish this mechanic would have been used in more board games.

Outside of the novelty of rolling marbles to determine how many spaces you get to move, Don’t Upset Me basically plays like every other roll and move game. You move your piece around the gameboard trying to be the first player to get one of your pieces home. The game also adds in the mechanic where you can send people back to home by landing on them. Other than the roulette mechanic the only somewhat unique mechanic in the game is the idea of the flipper mechanics which can potentially remove a playing piece from the game.

Since all of these mechanics are pretty straightforward, Don’t Upset Me is a very simple game. The game has a recommended age of 7+ but I think younger children could play the game as long as they can count up to eight and won’t put the small pieces in their mouth. With how simple the game is, I see it more as a children’s game or a game for adults to play with their children. I can actually see children enjoying the game quite a bit as I think they will really like the roulette mechanic. Don’t Upset Me doesn’t have enough strategy to keep adults interested in the game for long though.

The biggest problem with Don’t Upset Me is that there isn’t much strategy to the game. It has a little more strategy than some roll and move games but that isn’t saying a lot. The strategy that it does have is so obvious that everyone other than small children should have no problems figuring out what the best move is on any given turn. Basically there are two strategic decisions in the game.

With the strategy in the game being so obvious, it feels like Don’t Upset Me kind of plays itself after a while. There are a lot of situations where you have no decision to make and in the other scenarios it is usually pretty obvious what you should do. This means that the game relies almost entirely on luck. The player who spins the highest numbers while keeping their pawns safe is likely going to win the game. It is unlikely that your strategy is going to make a difference over who will ultimately win the game.

Other than the lack of strategy, the other big problem with the game is that it is actually too short. Based on my experience, unless the players get unlucky I would say most games will end within five minutes. The reason that the game ends so quickly is due to players only needing to get one of their pawns home in order to win the game. With how many spaces you can get from one roll combined with the small board, it doesn’t take long to make it around the entire board. You could theoretically win the game within three turns. In most games it will probably be closer to 5-7 turns. It seems like as soon as you start the game one of the players has already won. If Don’t Upset Me had any strategy you wouldn’t be able to implement it with the game being so short. Don’t Upset Me is not a good game so making it short was a good thing but I think the game goes too far in this regard.

For a game that is forty years old, I will say that the components still work surprisingly well. The gameboard is made of pretty thick plastic which means it should last through extended play. The only way I could see the components breaking is if players are rough with them. I was actually the most impressed by how well the roulette mechanic works in the game. The steel ball rolls along the outer ring really easily and always tips the flipper that it lands on. The components are a little dull looking compared to today’s games but they do a good job at serving their purpose.

Should You Buy Don’t Upset Me?

When I look at Don’t Upset Me I have to give the game some credit. Rather than creating another generic game where you roll the dice and move around the board, the designers tried something new. Instead of rolling dice, you roll a marble around the gameboard like a roulette wheel to determine how many spaces you get to move. I will admit that this mechanic is kind of fun but there isn’t much else to the game. Outside of this mechanic Don’t Upset Me is basically like every other roll and move game. The game relies almost entirely on luck as the only strategy in the game is so obvious that other than really young children, everyone will know what to do each turn. Combine this with the game ending almost as soon as it begins and Don’t Upset Me has problems.

If you don’t really care for roll and move style games, I see no reason why you would enjoy Don’t Upset Me. If you have younger children that would like the game’s concept, you may get some enjoyment out of the game. I would only recommend picking up Don’t Upset Me if you can get a good deal though.

If you would like to purchase Don’t Upset Me you can find it online: Amazon