The object of ROLLette is to be the first player to score 50 points.

Each player grabs all five of the marbles of their color. During a player’s turn they take one of their marbles and roll it around the outer circle of the gameboard. Players can roll their marble either clockwise or counter clockwise. The marble must make an entire revolution around the board. If it doesn’t make an entire revolution the player loses their turn. If the marble makes a full revolution and lands in one of the pockets around the gameboard it stays in that spot. The player who rolled the marble may also score some points (see the next paragraph for exact scoring). If the marble rolls into the center of the board the player retrieves the marble and their turn ends.

Players can score points in several different ways. In order to score, marbles are only counted that are in the same quadrant (separated by yellow triangles). 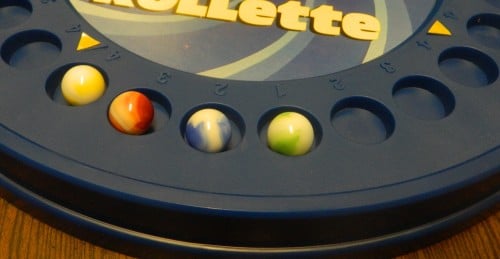 If a player rolls their marble and their marble lands next to at least two other marbles in the same quadrant they score points equal to the numbers of the spaces the marbles occupy. In the above example the player would earn 10 points (1+2+3+4). 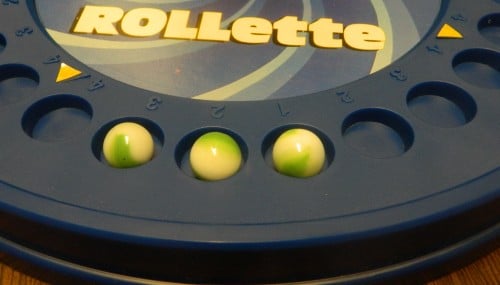 If a player rolls a marble and ends up with at least three of their color in a row they get the value of the marbles of their color multiplied by two. In the above scenario the player would receive 12 points ((3+2+1)*2). If there was either a marble to the left or right of the green marbles, the green player would receive 12 points plus the value of the other marble (not multiplied by 2).

If all five of a player’s marbles are in a pocket on the gameboard at the beginning of a players’ turn, the player gets to pick which marble they would like to remove and they roll that marble.

Whenever a player scores over 50 points they win the game.

What would you get if you took Roulette and took all of the gambling out of it? You would essentially get the game ROLLette. In ROLLette players roll their marbles around the gameboard like in Roulette hoping that their marbles will land in a pocket that scores them points.

Let’s get this out of the way right away. ROLLette relies almost entirely on luck. You could theoretically get better at the game by figuring out how hard you need to roll the marble in order to get it to stop in the right spot. Even if it stops in the right spot though you need to get lucky that the marble will fall into the pocket instead of bouncing off another marble or rolling out of the pocket. The amount of time that it would require to actually get enough skill in the game to actually impact the outcome is not worth it.

I usually hate games that rely almost exclusively on luck so you would think that I would hate ROLLette. For some reason I actually liked it quite a bit. It is hard to explain but ROLLette is the type of game that is just mindless fun. You have to put essentially no thought into the game. If you just want to play a game without having to think about your next move, ROLLette may be the game for you.

If I had to guess why I liked ROLLette despite it having no strategy or skill, I would have to guess that it is because of the rolling action itself. For some reason it is just fun to roll the marbles around the outside ring of the gameboard and see where they end up. ROLLette is a unique gameplay experience unlike anything I have seen in any other games (except for roulette but I don’t think a casino is going to let you roll the ball). It is hard to explain but it is just a fun game mechanic.

In addition to being unexpectedly fun, the game is also simple to teach and play. I honestly think you could explain how to play the game in around a minute. The game has a recommended age of 8+ but I don’t know why younger children would not be able to play the game. Any child that is old enough not to put the marbles in their mouth (due to being a choking hazard) would probably be old enough to play the game as long as there were adults playing that could tally the scores.The game is also quite quick to play. I would expect most games to last 15 minutes with a couple games maybe lasting up to 20 minutes. This makes ROLLette a great filler game.

While I had fun with the game, I also recognize that the game has some issues besides the luck/lack of skill already addressed. ROLLette has quite a few issues with its’ scoring system. For the most part the scoring system is fine. You get points related to the values of the pockets that the marbles land in. When you get three or more of your color in a row you get twice as many points. That is pretty fair in my opinion.

Being able to score so many points on one roll allows players to quickly go from last to first in the game. In one of the games I played I was in last place. In two turns I went from last to winning the game since during one of the turns I completed a quadrant and got 29 points. ROLLette can have huge swings in momentum and sometimes it can feel like you got ripped off when you did well for the whole game and then someone comes in and gets two lucky rolls and wins the game.

Finally I would say the components are pretty good. The gameboard is made of pretty thick plastic. It will probably incur scuff marks over time from the marbles rolling on it but otherwise should last since the only way it is going to crack is if you put a lot of weight on it or for some reason decide to fling it across the room. The marbles are also good. They are either glass or some substance other than plastic. The only real issue I had with the components were the stickers. At least with the copy I found at a thrift store all of the stickers that indicated the different quadrants had already fallen off. Without the stickers it is kind of hard to see where one quadrant begins and where one ends since you need to look for the raised triangles on the board itself.

ROLLette is a unique game. Just looking at the game you would think it would be pretty stupid. It has essentially no strategy and relies almost entirely on luck. The scoring system is somewhat messed up giving players opportunities to score too many points in some rounds which creates wild swings in players’ fortunes. Despite all of these issues, ROLLette is a pretty fun game.

If any of the above issues would bug you too much, you probably won’t like ROLLette. If you like the occasional filler game though, you may be surprised by ROLLette. It is not a game that I would play all of the time but I had fun playing it.