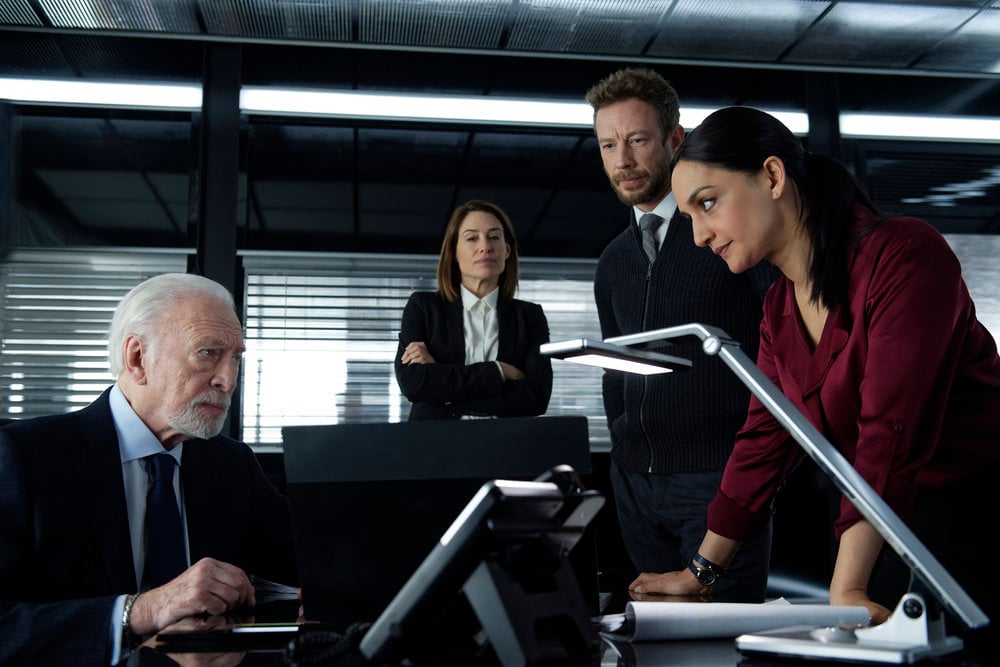 When I first heard that a show called Departure was heading to Peacock I was a little surprised. With NBC already having a show based on a plane vanishing and reappearing (Manifest), I thought it was curious that their streaming service was airing another show based on a plane that goes missing. As I enjoy Manifest I was still intrigued enough to check out Departure as the idea of investigating a plane that suddenly goes missing was interesting enough. Departure is a solid and sometimes exciting mystery thriller filled with twists and turns that at times feels longer than it needed to be.

When passenger plane Flight 716 suddenly goes missing Kendra Malley (Archie Panjabi) is called on to investigate. Kendra is considered one of the best investigators in the world, but has been off the job for a while after a tragic event in her past. Kendra along with her mentor Howard Lawson (Charlie Plummer) assemble a team to try and find the missing plane before it is too late. The circumstances behind the plane disappearing are suspect as unknown forces try to undermine their work. Can Kendra and her team discover the truth to prevent another plane from vanishing?

As I mentioned at the beginning of this review when I first heard of Departure my mind immediately went to Manifest. It makes a lot of sense to make that initial comparison as Manifest only came out two years ago and has a very similar premise. For those that are curious outside of the fact that a plane goes missing there is pretty much no similarities between the two shows. Manifest is basically a sci-fi show while Departure is grounded in reality with no sci-fi elements.

Instead Departure is mostly about the investigation of why the plane went missing. Outside of the twist that they are investigating a plane going missing, Departure actually feels a lot like a season long crime/mystery story. The show reminded me a lot of a crime drama where instead of figuring out who killed/committed the crime, the story follows the detectives trying to figure out what happened to the plane and who was responsible. Many of the investigation techniques seem very similar to most other crime dramas. The show also has some thriller elements as there are a lot of twists/turns along the way. Some family drama aspects are sprinkled in as well.

I ultimately had some mixed feelings towards the show. At times I think Departure is quite good, but it also has some issues.

On the positive side I think the mystery is pretty good. The show does a pretty good job sprinkling in clues throughout the episodes. There are plenty of twists and turns as well giving you enough false leads to keep things interesting until the final episode. I thought most of the twists and turns were pretty good even though the number of twists towards the end of the season gets a little excessive in my opinion. I also thought the mystery was kind of easy to solve as I had my suspicions pretty early. If you like a good season long mystery though you should enjoy Departure.

I would say that the biggest problem that I had with Departure is that at times it feels a little drawn out. While a lot of the plot points end up coming into play by the end of the season, there are some that don’t feel like they fit. It honestly felt like the show only added some of the plot lines in order to pad out the length. While the show is pretty good most of the time, there are times where it hits some slow points. Ultimately I think the show could have been an episode shorter and it wouldn’t have had any significant impact on the series as a whole. There isn’t a particular episode that I would cut, but there are a few minutes here and there which likely would have lead to a complete episode that could have been eliminated.

On this topic I am kind of curious if Departure is planned as a miniseries or if there are any intentions to turn it into a multi-season show. Without getting into any spoilers I can easily see either being an option for the show. You do get a solution to the mystery by the end of the first season so you don’t have to worry about the show not getting a second season and having no resolution. If the show doesn’t get a second season, those who watched the show should still be satisfied with the conclusion. At the same time the final episode does tease something that could be the plan for a second season. I am kind of curious how a second season would turn out as it likely would have to be quite a bit different than the first season.

Ultimately I found Departure to be an enjoyable series even though it is not perfect. In many ways the show feels like a combination of a crime drama/mystery mixed with thriller elements. The twist is that the show is based around a plane that goes missing. The mystery is pretty good as it is filled with enough twists and turns to keep things interesting. The acting and characters are also pretty interesting. The biggest problem that I had with the show is that it drags a little. At times it just felt like parts were added just to pad the length of the show. I honestly think the show could have dropped around an episode’s worth of runtime without adversely impacting the show.

My recommendation for Departure mostly comes down to your thoughts on the premise. If you aren’t really into crime dramas/mysteries or you don’t find investigating a plane’s disappearance to be all that interesting I would probably say that you should pass on Departure. If you think the premise sounds interesting enough though I think it is worth at least checking out the first episode as you will probably enjoy the show.

Recommended For: People who think the premise sounds interesting.