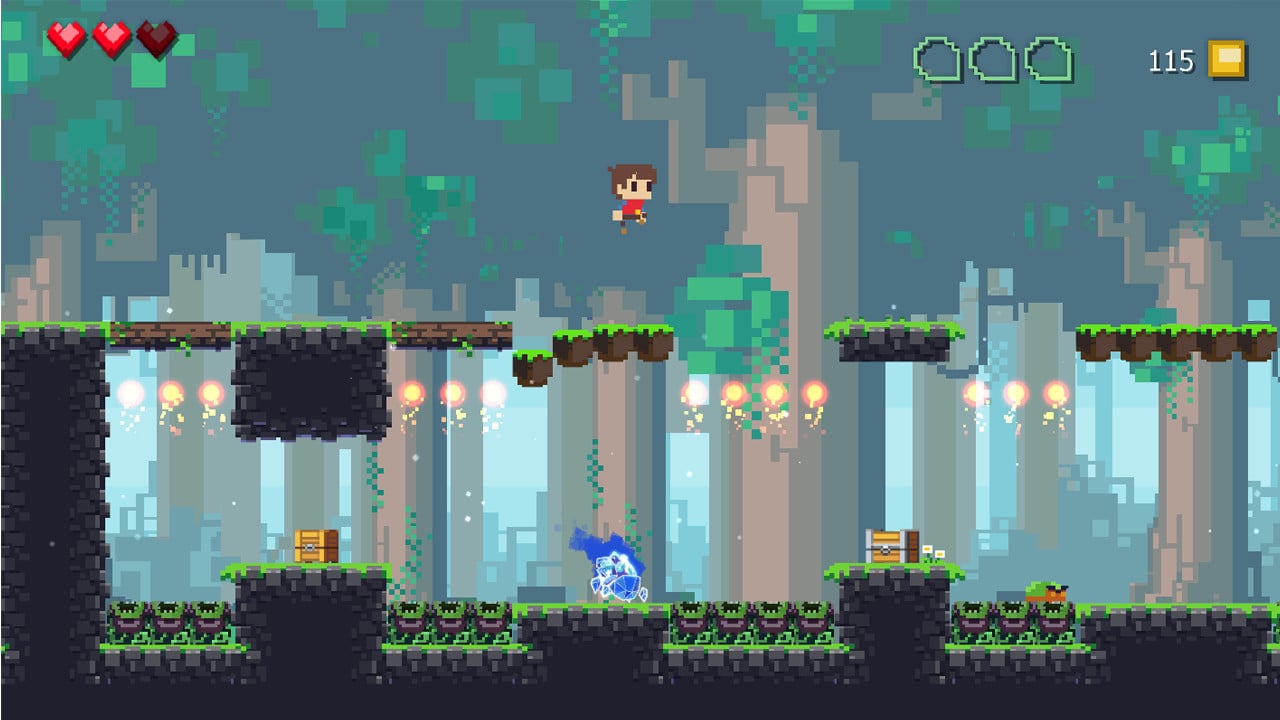 Released back in the summer of 2015, the Adventures of Pip is a game that kind of slipped under the cracks for me. Until recently I had never heard of the game which is kind of surprising as it seemed like the type of game that would really appeal to me. Ever since I was a kid I have been a big fan of platformers. On top of that I have always liked games that try to do something original. Adventures of Pip is basically your typical 2D platformer which adds in the ability to change your character’s form. This sounded like a really interesting idea. While I missed it when the game was released on PC, today the game makes it debut on Nintendo Switch so I was finally able to check it out. Adventures of Pip is a fun 2D platformer with some interesting ideas that create a unique experience that at times relies too much on traditional platforming mechanics.

In Adventures of Pip you play as Pip. Pip is a single red pixel living in a 32-bit world called Pixel Kingdom. Pixel Kingdom is fueled by the Bit Stream. Whoever controls the Bit Stream can craft the whole kingdom’s destiny. The princess is the only one that can control the Bit Stream though so the evil Queen DeRezzia kidnaps her to control her power. Despite being just one pixel, Pip is the only person in the kingdom that is brave enough to try and rescue the princess. Early in his journey Pip is granted the ability to manipulate the Bit Stream which allows him to swap between his one pixel form, a 8-bit form, and a 16-bit form. Can Pip overcome his simple beginnings to become the hero his kingdom needs and save the princess?

In many ways Adventures of Pip is like your typical 2D platformer. The objective of each level is to traverse the world to reach the end. Like all 2D platformers most of the game revolves around jumping across gaps. This is really no different than any other 2D platformer outside of abilities you get from Pip’s different forms. In addition to jumping over gaps there are various obstacles and enemies that you have to avoid or deal with. You can defeat enemies by jumping on them or using the attack ability from the 8-bit and 16-bit forms. Pip has a number of hearts and each time you take damage you lose one of the hearts. If you run out of hearts you will be transported back to the last checkpoint in the level that you unlocked.

The thing that really differentiates Adventures of Pip is the ability to change your form. In the game you have access to three different forms: single pixel, 8-bit, and 16-bit. This is more than just a cosmetic thing as each form has its own special abilities. The single pixel is lighter which allows it to jump higher and float. The 8-bit form gives you a punch ability which lets you attack enemies and also the ability to cling to walls and do wall jumps. Finally the 16-bit form gives you a sword which breaks blocks and the character is heavier which helps in certain situations. Interspersed throughout the levels are blue glowing enemies. When you kill one of these enemies your form will be upgraded to the next level. In order to downgrade your form (16-bit to 8-bit to one pixel) you just press a button which causes a small explosion and transforms you to the next form. There are times where you can use two or all three of the forms to proceed. There are specific times where you have to be a specific form though in order to proceed.

The thing that initially intrigued me about Adventures of Pip was the idea of having three different forms that you can change between. This is easily the game’s greatest strength in my opinion. These mechanics really make the game. The additional abilities that each form grants you are not particularly original as they mostly just alter your jumping abilities along with how you can attack enemies. What is unique is how you change between them. Figuring out what form you need to use to proceed is a key element in the game. Usually the game gives you time to figure this out as you can change forms while standing on solid ground. In some cases though you need to change forms while jumping. This mechanic adds some puzzle elements to the game as you figure out how to use the abilities to make progress.

Outside of the form shifting the game plays a lot like your typical 2D platformer. If you took out the form shifting the rest of the mechanics would be found in pretty much every other game in the genre. You have your typical jumping mechanics which includes wall jumping. The combat is pretty typical as well as you can either jump on the enemies heads or you can hit them with your 8-bit or 16-bit form. If you are looking for a highly original game or don’t really care for 2D platformers Adventures of Pip may not be what you are looking for.

Many of the mechanics might not be highly original, but Adventures of Pip is still a really good game. I attribute a lot of this to the fact that the gameplay is just really satisfying. The game pretty much offers everything that you could want from a 2D platformer. Outside of a few rare occurrences the controls are pretty precise. The controls are simple as well. Anyone who is a fan of the genre should really enjoy the game as it does a good job utilizing the mechanics that the genre is known for.

I would say that the game is kind of easy though. In the game you can’t really die. If you run out of health you just get sent back to the last checkpoint that you passed. Therefore whenever you die you are never sent back too far. The few areas where the game is kind of difficult you may die a few times. As you just get sent back to the last checkpoint though you can keep trying these parts until you finally are able to complete them. As you progress in the game you also unlock more hearts which makes it even harder to die from obstacles and enemies. Honestly most of the difficulties that I had in the game came from trying to find/reach the hidden civilians. Some of them are kind of hard to reach and I died a few times just trying to find hidden locations. If you want a real challenge you will probably be a little disappointed. If you don’t mind an easy to moderately difficult game though I think you will be satisfied with Adventures of Pip.

As for the overall atmosphere there are some things that I liked and others that I think could be better. I actually really liked the idea of a world comprised of single pixel, 8-bit, and 16-bit characters. I thought the game’s graphics did a good job utilizing this as well. It is cool seeing characters of different eras together in the same game. Even the idea of a lonely little pixel saving the day showed a lot of potential. The biggest problem with this area of the game is the fact that the game never fully capitalizes on it. The overall world is interesting, but the game doesn’t explore it enough. In many ways the story ends up becoming just another rescuing the princess story.

I would say that the game’s length is not bad. The game features five different worlds for a total of 36 levels. How much time you ultimately get out of the game is going to depend on how good you are at platformers and how much you care about collectibles. If you are really good at 2D platformers I think you could get through the game pretty quickly. Those that are interested in getting collectibles though could get a decent amount more out of the game. Each level in the game has three hidden citizens that you can find. Some of these are pretty easy to find, but others require you to search for hidden walls. I am not sure if finding the civilians do much outside of giving you more people to talk to in town. I haven’t quite finished the game yet (I am on the last world), but I would guess most players could get around 5-7 hours out of the game. If you only care about finishing the game without getting all of the villagers it will probably take a little less time.

As a fan of 2D platformers I enjoyed playing Adventures of Pip. In many ways the game plays like your typical 2D platformer as many of the mechanics are the same. At times the game kind of fails to differentiate itself, but it is still quite satisfying as the jumping is still fun and the controls work well. I would say that the game is on the easier side though. The thing that really differentiates Adventures of Pip though is the fact that your character can utilize three different forms. This twist is fun and it adds a sort of puzzle element to the game as you try to figure out what form you need to use to proceed.

If you don’t really care for 2D platformers or are looking for something that totally revolutionizes the genre, Adventures of Pip may not be for you. Anyone who really enjoys the genre though and thinks the premise sounds interesting should really enjoy the game and should consider picking it up.