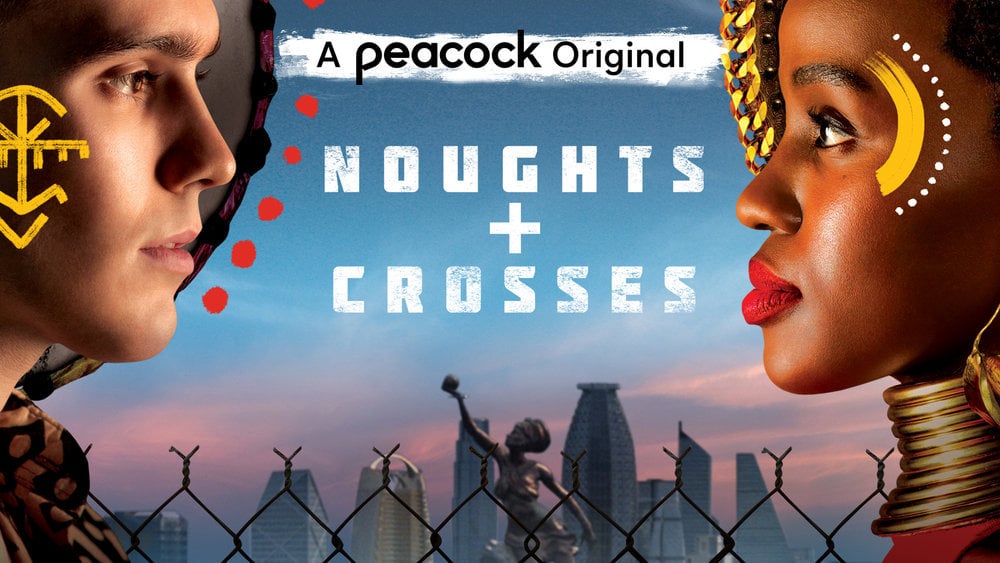 Released back in the early 2000’s Noughts + Crosses was a set of young adult novels written by Malorie Blackman. I have to admit that I had never heard about the series until hearing about the TV show. Despite this I was intrigued by the show’s premise. I have always been pretty interested in the alternative history genre. Basically the premise of Noughts + Crosses is that instead of Europe invading and enslaving Africa the opposite happened. I thought this was an interesting premise for an alternative history show especially due to recent events. Noughts + Crosses is an interesting and timely show that is enjoyable despite being kind of grim and relying too much on its young adult novel roots.

Noughts + Crosses is based on an alternative history. Hundreds of years ago the nations of Aprica/Africa formed an alliance and invaded Europe conquering the continent and enslaving its people. The show takes place in present day Albion (basically London). While slavery is now gone, true equality has not reached the nation. The original inhabitants of Albion are known as Noughts and are treated like second class citizens. Meanwhile the descendants of Aprica are called Crosses and they have all of the wealth and power. Tensions are high in the country after a brutal attack by a Cross on a Nought. This leads Nought factions to fight for equality while some Cross factions try to keep the status quo. In this backdrop Sephy (a Cross) is the daughter to a powerful politician while Callum (a Nought) has lived in poverty most of his life. In Albion interracial relationships are illegal or highly discouraged (I am not sure which), but Sephy and Callum start a romantic relationship after being friends as children. With the world around them trying to tear them apart, can Callum’s and Sephy’s relationship show that love can overcome?

As the show is based on a series of books, before getting into my review I wanted to quickly address how the series compares the books that it is based on. I have never read the books so this comparison is going to be based on reading a synopsis of the books online. The first season of Noughts + Crosses seems to be based entirely off the book of the same name as it doesn’t seem to really go into anything from the other books. The show seems to stick pretty closely to the characters from the book. Most of the main characters from the book appear in the show. Some of the events from the book are also in the series with some slight tweaks here and there. Other elements of the show seem to be quite different. I am not going to get into specifics to avoid spoilers, but there are some things that seem quite different between the series and the books.

As I had never read the book series, the main thing that initially intrigued me about Noughts + Crosses was the idea of the show being built around an alternative history. I don’t know why exactly, but I have always found this genre to be quite intriguing. I find it interesting to wonder what would have happened if things had played out slightly different in the past. In this regard I have some some mixed feelings about Noughts + Crosses. In some ways the show embraces the alternative history element and in others it doesn’t. It is truly interesting to watch how the race dynamics in the show are different, and it makes you really think about how that plays a role in the world today. I think the show also does a good job implementing African clothing, music, and other elements into the everyday life of the show’s world. This is the area that left me a little disappointed though. The problem is that I found the show to be a little lacking in creating its own world. Outside of the differences already mentioned the world basically feels like London except with the power dynamics switched. I find it a little skeptical that everything would have turned out almost exactly the same despite a huge change in the history of the world. This didn’t ruin the show in my opinion, but I kind of wish it would have embraced the alternative history element a little more.

I don’t see this as either a positive or negative, but Noughts + Crosses is what I would consider a grim show. The show is not a happy escape from the world filled with laughter and cheer. Based on the premise alone this should be pretty obvious. If you need a show to lift up your spirits it might not do the job for you. This is not necessarily a bad thing. In this way I think the show shares quite a bit in common with Handmaid’s Tale. Just like Handmaid’s Tale, Noughts + Crosses is an enjoyable show but it is quite dark and kind of depressing at times. While 2020 has been kind of depressing and you probably want a comfortable and happy show to distract you from everything that is going wrong in the world, Noughts + Crosses is important as it talks about really important issues in an unique way.

The show is in many ways about inequality and what people are willing to do to keep those policies in place or to tear them down. The show is quite timely in this regard as it prominently features things such as police brutality/violence, racism, income equality, terrorism, and general hatred of those who are different. In many ways despite the alternative history many things in Albion are similar to what the world is dealing with today. I would say Albion is worse as segregation is still legal and interracial relationships are illegal/highly discouraged. Despite this the show showcases a lot of issues that the world is dealing with today except that the races have been reversed. This element of the show is kind of depressing, but I also think it is what the show does best. In fact I kind of wish the show would have focused on it more.

I enjoyed Noughts + Crosses, but it does have a couple of issues which keeps it from being as good as it could have been. The biggest problems that I had with the show mostly come from the fact that it is based on a young adult novel. While the show can be quite thought provoking and deep, it also has plenty of moments where it feels like a typical teen drama. It kind of feels like a modern take on the Romeo and Juliet story as you have two people that fall in love that are from opposing sides of a conflict. Interspersed throughout the show are your typical teen relationship drama elements that just kind of feel out of place. I didn’t have a problem with the romance element of the story, but I think the show should have approached it in a different way. Outside of the injustice in the world, in many ways these elements feel a lot like most other teen dramas. In some ways I think these elements kind of cheapen the rest of the story.

The other problem that I had with the show is that it just feels kind of long at times. As Noughts + Crosses was a show originally produced for British television, all of the episodes are around 55 minutes long. That is too long in my opinion. This leads to some plotlines that don’t really go anywhere. With the show being kind of depressing/grim it makes the show drag a little. I really think the show could have benefited if they cut five to ten minutes from each episode. The extra length doesn’t ruin the show, but I think it could have been improved by more streamlined episodes.

At the end of the day I thought Noughts + Crosses was a pretty good show even though it can be kind of grim at times. I was initially intrigued by the alternative history element. I think the show does a decent job utilizing it even though I think the show should have embraced it a little more at times. I think Noughts + Crosses greatest strength is that it addresses issues that are important in today’s world in a unique way. Elements of the show make you really think. This does mean that the show can be quite dark and depressing at times. There is very little in the show that makes you happy or will cheer you up. This is not necessarily a bad thing as it shares this element in common with a show like Handmaid’s Tale. The main problem that I had with the show comes from its young adult book origins. At times the show doesn’t feel like it knows what it wants to be as it is usually a serious drama, but then it has elements from your typical teen drama. I just found these elements to be kind of boring. The episodes are also longer than they needed to be.

My recommendation basically comes down to your thoughts on the premise and whether you mind that the show is kind of depressing/grim. If you want a cheery/happy show or don’t really care for the premise Noughts + Crosses won’t be for you. If the premise interests you though and you want a show that makes you really think, you should consider checking out Noughts + Crosses.

We would like to thank Peacock for the screener used to write this review.

Recommended For: People who think the premise sounds interesting and don’t mind a show that is kind of grim/depressing.