Place the letters in a circle with enough room for the tower in the middle. Place the token between two of the letters. The player whose birthday is coming up next gets to be the first player.

Roll the dice and move the token clockwise the number of spaces rolled. If you roll “Any Letter” you can move the token between any two letters. The player then selects one letter from either side of the token and tries to add it to the tower. 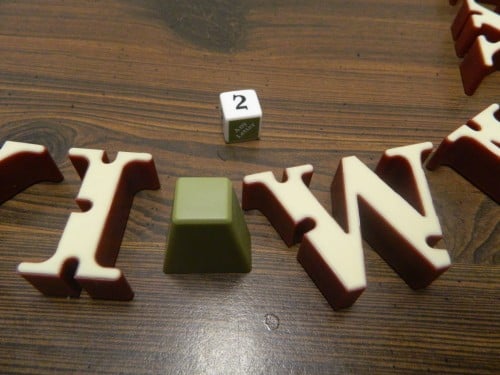 The player rolled the dice and the playing piece ended up between the “I” and “W” letter pieces. The player can choose which of the two letters they want to add to the tower.

When you add a letter to the tower the following rules must be followed: 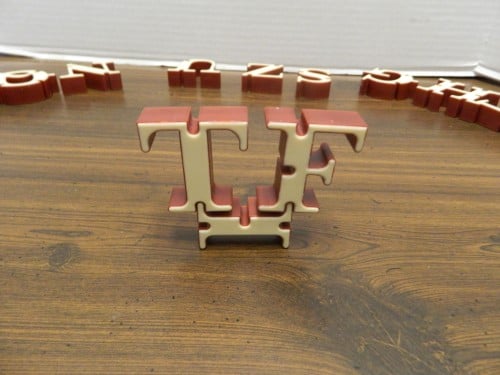 The current player added a letter to the tower. The player can spell the word “Fit” so they will score three points.

If when adding a letter any part of tower falls, the round ends immediately. The player who knocked down the tower loses three points. The player cannot go below zero points though. The round also ends if all 26 letters have been added to the tower. When the round ends all of the letters are placed back into the circle. The next player then takes the first turn of the next round.

After playing a letter the player can form a word from the letter they played and any letter that touches the letter played or any other letter used in the word. A player does not have to use all of the letters in the tower. The player says the word they formed out loud and scores points based on how many letters make up the word (a four letter word is worth four points). Players can only score from one word each turn. 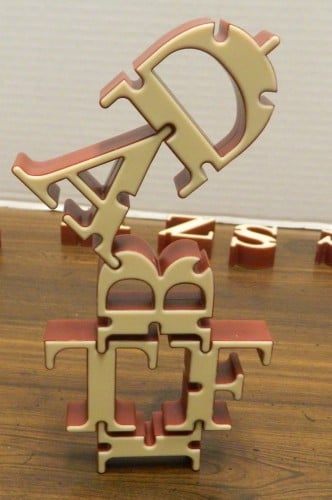 The current player added the “D” at the top of the tower. The player formed the word “Bad” so they will score three points.

If a player does not think the word that a player is trying to score is an actual word, they may challenge the word. The only rule for words in the game is that the word has to be an English word. If the word is determined to be a valid word, the challenger loses three points. If the word is determined to be invalid, the player who formed the word loses all of the points they would have gained from the word and they lose three points.

The first player to reach 20 points wins the game.

We have played a lot of word games on Geeky Hobbies. The word game genre is quite popular in board games since a lot of publishers think they can make the next Scrabble. Konexi is another one of those games that tries its own twist on Scrabble. In the case of Konexi, Scrabble is combined with Jenga to form a dexterity word game. I never thought that Scrabble would get mixed with Jenga but it does form an interesting idea.

Of the two I would say that the Jenga element is the more prevalent mechanic in the game. You are trying to spell words but successfully adding letters to the tower is the more important element. The game plays like a stacking game with a spelling mechanic added on to add a little variety to the game.

For the most part the stacking mechanic is solid. The plugs and sockets in the letters are a good idea. They make it much easier to connect the letters together and build larger towers of letters. Without the plugs and sockets the game would have been a mess since it would have been hard stacking more than a couple letters. While you might be skeptical, I think you could make a tower out of all 26 letters. With a strong base and players focusing more on building the tower than messing with each other, you can make a large sprawling tower.

Unfortunately this is unlikely to happen in the game. Players can easily mess with one another making it hard to get more than a couple letters in the tower. The easiest way to mess with the other players is to play a letter with a thin base at the bottom of the tower (the letter I for example). With a thin base the tower is unstable right away making it hard to add a lot of letters to the tower. Players could also make it harder on other players by making it really hard to access one of the letters in the tower. Since the vowels are key in the game, since you will need to use at least one of them, a player could block off the vowels so other players will have a hard time using them.

The biggest problem with it being so easy to mess with the other players is that the punishment for knocking over the tower is too harsh in my opinion. Losing three points early in the game is harsh. One player can have a hard time ever getting over zero points if they knock the tower over a couple times because the tower is set up for them to fail.

The main reason the spelling mechanic doesn’t play a bigger role in the game is the fact that it is hard to make long words in the game. For the most part you are only going to be able to form three to five letter words because it is too hard to get more letters connected to one another. That is kind of a shame because the connection/spelling mechanic is pretty interesting. When placing letters you need to position them in order to create a chain of letters that you need to spell the word.

This positioning mechanic is interesting since it leads to some strategy in the game. You can usually form a word during your turn. The question becomes whether you want to take a risk. Do you want to go for that five point word that could easily bring the tower down or do you want to go after the safer word that is only worth three points?

Being a word and a dexterity game you wouldn’t think that there would be a lot of luck but you might be surprised by Konexi. Since the letter you can add to the tower is determined by a roll of a die, you could get the perfect letter to make a high scoring word but you could just as easily get stuck with a letter that you can’t do anything with. I personally think the game might be more fun if you just ditched this part of the game and let players choose whatever letter they wanted on their turn.

I think the components might by Konexi’s greatest strength. While the letters are made of plastic they are quite sturdy and serve their purpose well. The plugs and sockets in particular are a really good idea since they make it much easier to stack the letters and create gravity defying towers. With some tweaks to the rules I think you could make Konexi into a really good game.

Konexi is a very solid but average word game. The game’s concept is interesting combining a word game with a dexterity game. I had fun with the game since it was a unique experience. I wish the word element of the game would have played a bigger role in the game though. You usually can only score short words. This makes the stacking element the dominant element of the game. The stacking element works fine but it is too easy to mess with the other players.

Do you think the idea of combining a word game with a stacking game is an interesting idea? If so I think you will enjoy Konexi since it is an interesting combination of the two genres. If you don’t really like word or dexterity games though I don’t think Konexi will be for you.

If you would like to purchase Konexi you can purchase it on Amazon. Konexi