Having played as many board games as I have, you tend to encounter many different board game themes. There have been some really good themes and some really strange/stupid themes. Very few board game themes will ever be able to compete with today’s game though. Doggie Doo is a 2010 board game where you basically collect dog “mess”/poop. You might think that this has to be a joke but Doggie Doo is a legit game that has somehow been reprinted a couple times. Just knowing the premise of the game didn’t leave me with high expectations for the game but I decided to give it a chance after finding it for really cheap at a thrift store. Despite having very low expectations for Doggie Doo, it somehow still found a way to disappoint me.

How to Play Doggie Doo

Each player chooses a starting shovel. Use the mold to shape the dog food into appropriate sized pieces. 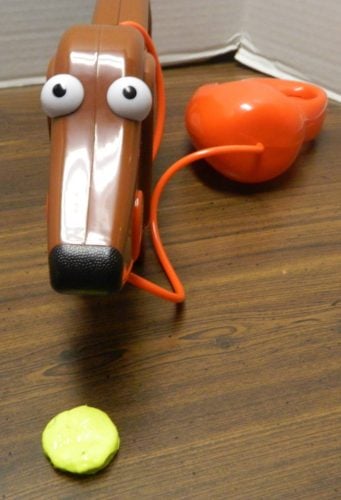 A dog treat has been made for the dog. 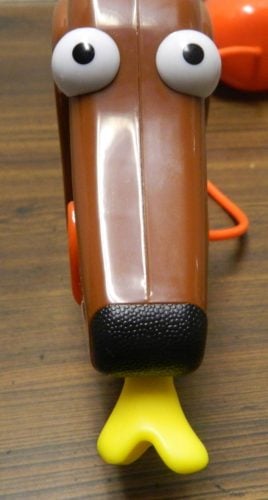 The dog has been feed so the game can begin.

The youngest player starts the game. On a player’s turn they roll the die. The player takes the action corresponding to the symbol they roll:

When pressing the leash you are supposed to press the button quickly and firmly to prevent the food from getting stuck in the dog. If the dog makes a mess on a player’s turn, the current player places it on their shovel. A new piece of dog food is put in the dog’s mouth and the game continues. 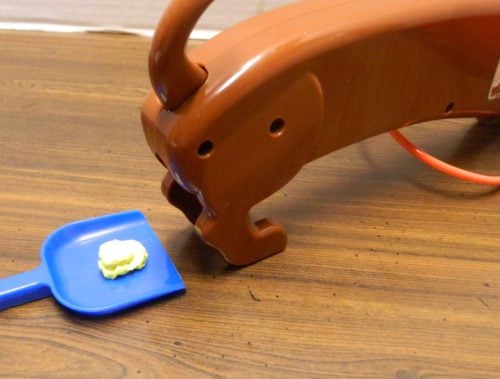 The dog has made a mess so the blue player scores a point.

Once a player has completed their action, play passes to the player to the left of the current player.

The first player to get three messes on their shovel wins the game. 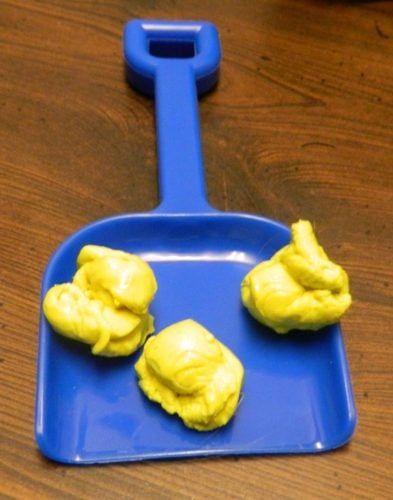 The blue player has collected three messes so they have won the game.

My Thoughts on Doggie Doo

I didn’t have high expectations for Doggie Doo. I mostly gave Doggie Doo a chance because it was really cheap and I was a little curious about how bad the game could actually be. I have played quite a few really bad games and I was wondering where Doggie Doo would place in the ranking of worst board games of all time. While probably not the worst, Doggie Doo has to be considered one of the worst board games that I have ever played.

While there are plenty of problems with Doggie Doo, the biggest issue is that it is hard to even classify it as a game. Basically you roll the die hoping that you roll a high enough number to make the dog poop. That is basically all there is to the game. Outside of being good at rolling a die you have no impact on the outcome of the game. You just keep rolling the die until one player is lucky and wins the game. Maybe it is just me but I don’t find a game compelling that has no real player input.

The only input players have in the entire game is when one of the players roll the symbol that lets them trade shovels with another player. I wouldn’t really consider this a decision since it is so obvious what you should do anytime you roll the symbol. If you want to win you will just trade with the player that currently has the most dog poop on their shovel. Other than purposely sabotaging yourself in order to help a kid win, I don’t see anyone not choosing the shovel with the most poop.

This leads to the biggest problem with the game. Basically most of the game is pointless. You could do a good “job” collecting two dog poops and then another player can roll the trade shovels symbol and steal all your progress towards victory. Basically the last player to roll a trade shovel symbol has a very good chance of winning the game. While Doggie Doo relies entirely on luck this mechanic doesn’t help. Anyone who would actually enjoy Doggie Doo isn’t going to take it that seriously but I think it is pretty stupid for a game to basically hand the game to the player that was lucky to roll the right symbol at the right time.

So let’s get to the main reason why most people would even consider picking up Doggie Doo. Basically I see two purposes for Doggie Doo. I can see it maybe working with young children and also as a gag gift. If you think it would be funny to play a game with a pooping and farting dog, you might get some laughs out of the game. If you have kids that think farting is funny I could see them having quite a bit of fun with Doggie Doo. The game is really easy to play and is quick enough to keep their attention. I personally didn’t find the game to be funny though and in some ways it is kind of disgusting. I see Doggie Doo as more of an activity or a gag gift than an actual game. Your mileage may differ though.

In addition to terrible gameplay and a theme I didn’t find particularly funny, the game’s component quality is pretty bad. While I am unsure how much the previous owners played the copy of the game I found at the thrift store, I can say that the game does not work particularly well. The dog food regularly gets stuck in the dog which is a pain to get out. The outside of the dog is made of pretty thick plastic but the insides use pretty thin plastic which was starting to crack in my copy. While your mileage may differ I don’t think Doogie Doo was made to last.

After playing Doggie Doo I was curious if the game had a credited designer. I was actually surprised when I read that the designer of Doggie Doo was Bruce Lund. While Bruce Lund is not a well known designer, one of the games he worked on has developed quite a cult following over the years. Back in 1986 Bruce Lund along with Chuck Kennedy created the “classic” board game Fireball Island which is quite valuable today due to it selling so poorly when it was first released. While I have never played Fireball Island before I have a strong feeling that it is considerably better than Doggie Doo.

Should You Buy Doggie Doo?

In my opinion Doggie Doo is one of the worst board games that I have ever played. The biggest problem with the game is that I don’t know if you can really even call it a game. Basically all you do in the game is roll the die and hope the dog poops on your turn. The only actual decision in the game is deciding with whom to exchange shovels and that decision is so obvious that it really shouldn’t even be considered a decision. Add in some pretty poor component quality and there isn’t much to the game. Honestly the only possible redeeming quality for Doggie Doo is the game’s theme. Young children and adults that like fart noises might find the “game” to be quite funny. My group didn’t find the game to be funny though which just made the lack of gameplay even worse.

If you are looking for an actual game Doggie Doo is not going to be it. Serious and even semi-serious gamers will downright hate this game. The only people I could actually see enjoying the game are young children and people that see it as more of a gag gift than anything else. Even if that describes you I would only pick up the game if you can get a really good deal on it.

If you would like to purchase Doggie Doo you can find it online: Amazon

Quip It! Board Game Review and Rules
Click here to cancel reply.