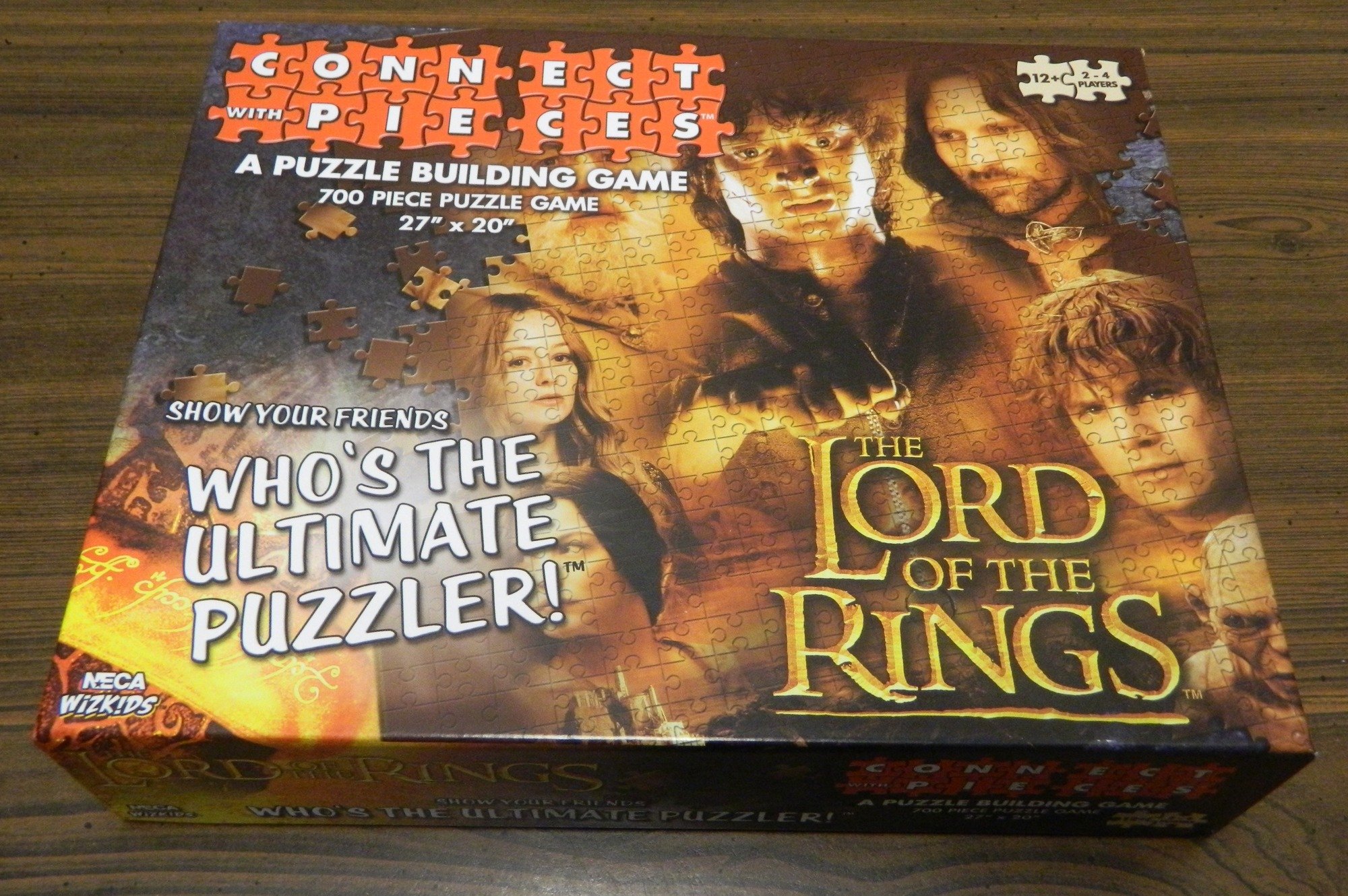 After a set amount of time, amount of points, or when the puzzle is completed; whoever has the most points wins the game.

Shake up the pieces inside one of the lids of the box. To begin the game all of the players search through the box for a star piece or a corner piece. Each player finds one of these pieces and adds them to the table.

Before the game begins the players get one minute each to pick ten pieces from the box.

One player starts the game and has one minute to add as many of their pieces as they can to the pieces already in the center of the playing area. The only pieces players can play that don’t attach to a piece already on the playing surface is one of the center pieces (star pieces) or one of the corners. Some of the pieces are interchangeable so different pieces could be placed in the exact same position. Each piece has a symbol pressed into it which is used to determine the orientation of the given piece.

While the current player is adding pieces to the puzzle, the next player has the same amount of time to add five additional puzzle pieces to their set of puzzle pieces. Each player can have up to twenty puzzle pieces in front of them. If a player doesn’t like the pieces that they currently have they can choose to throw all of their pieces into the box and draw ten pieces instead of five. If a player doesn’t take all of their allotted pieces within the minute, they don’t get to take the additional pieces.

At times during the game players may place a piece in the wrong place. If it is determined to be in the wrong place when it is originally played, it is removed immediately and the player doesn’t score the points that the piece would have otherwise scored.

Scramble play is an alternative way of playing Connect With Pieces. Instead of taking turns, all of the players play at the same time. Players switch between drawing pieces and playing pieces. Players can only have twenty pieces in front of them at any given time. When a player starts drawing pieces they score points for the pieces they played since the last time they drew pieces. Players need to take at least one piece from the box to score points for pieces played.

Connect with Pieces actually tries to do something different. Instead of everyone building their own puzzles, in Connect with Pieces all of the players work on the same puzzle. The game kind of plays like a tile laying game where you are building a puzzle and scoring points based on how many and where the pieces are played. I give the creators a lot of credit for trying to create something unique. Unfortunately it doesn’t really work.

The problem with the game is that the mechanics don’t work. The mechanics are pretty simple but they don’t work because it is too hard to find matching pieces. In the early game you will be lucky to find one or two pieces that actually match during your turn. You could easily have a round where you find no matching pieces. As more pieces are added to the puzzle it becomes easier to find a match but the game is so dull before you get to that point that you will likely quit before getting to that point in the game.

Another problem with the game is when you actually find a match it is hard to even tell if it is truly a match. How the pieces are cut it is so hard to tell if two pieces truly match up. Especially on the edges two pieces could line up and still not be the correct pieces because they are just slightly different. I think this is due to the puzzle having pieces that are interchangeable which makes it really easy to think two pieces belong together when they actually don’t.

One thing the game does to try and make it a little easier to figure out where pieces are supposed to go is by imprinting symbols on the pieces. This is a good idea since it can help players figure out the orientation of all of their pieces which should make placement easier. The problem is that the game could have done a better job choosing symbols that are easier to figure out how they are supposed to be arranged. The arrow and moon symbols work really well while the other symbols don’t work that well since it is kind of hard to determine which side of the symbol is supposed to be facing upward.

Finally we get to the scoring system which is not a bad idea but doesn’t work that well. The scoring options themselves are pretty simple even though a couple of them are more complicated then they should have been. The problem with the scoring is that it is harder than you would think remembering which pieces you actually added in any particular round. When you are fiddling with your pieces trying to place as many as quickly as possible, it is hard to remember which pieces you actually played which is key for several of the scoring options.

I give the creators of Connect with Pieces credit for trying to make a game out of a jigsaw puzzle. Instead of just making it a competition of who can complete the puzzle fastest, Connect with Pieces actually tries to do something new. Unfortunately the game just doesn’t really work since it is too hard to play pieces early in the game, it is too hard to see if two pieces actually connect to one another, and it is hard to even remember which pieces you played in a particular round.

I hoped that Connect with Pieces would be a good idea for a game but I was disappointed. If you are not a big fan of puzzles, Connect with Pieces isn’t going to be for you. If you really like jigsaw puzzles though you may still enjoy Connect with Pieces even though I didn’t really care for it. The games/puzzles are really cheap at the moment so even if you don’t like the game aspect, at the very least you get a pretty cheap puzzle to put together.

If you would like to purchase a Connect with Pieces puzzle you can purchase them on Amazon: Breaking Dawn Part 2