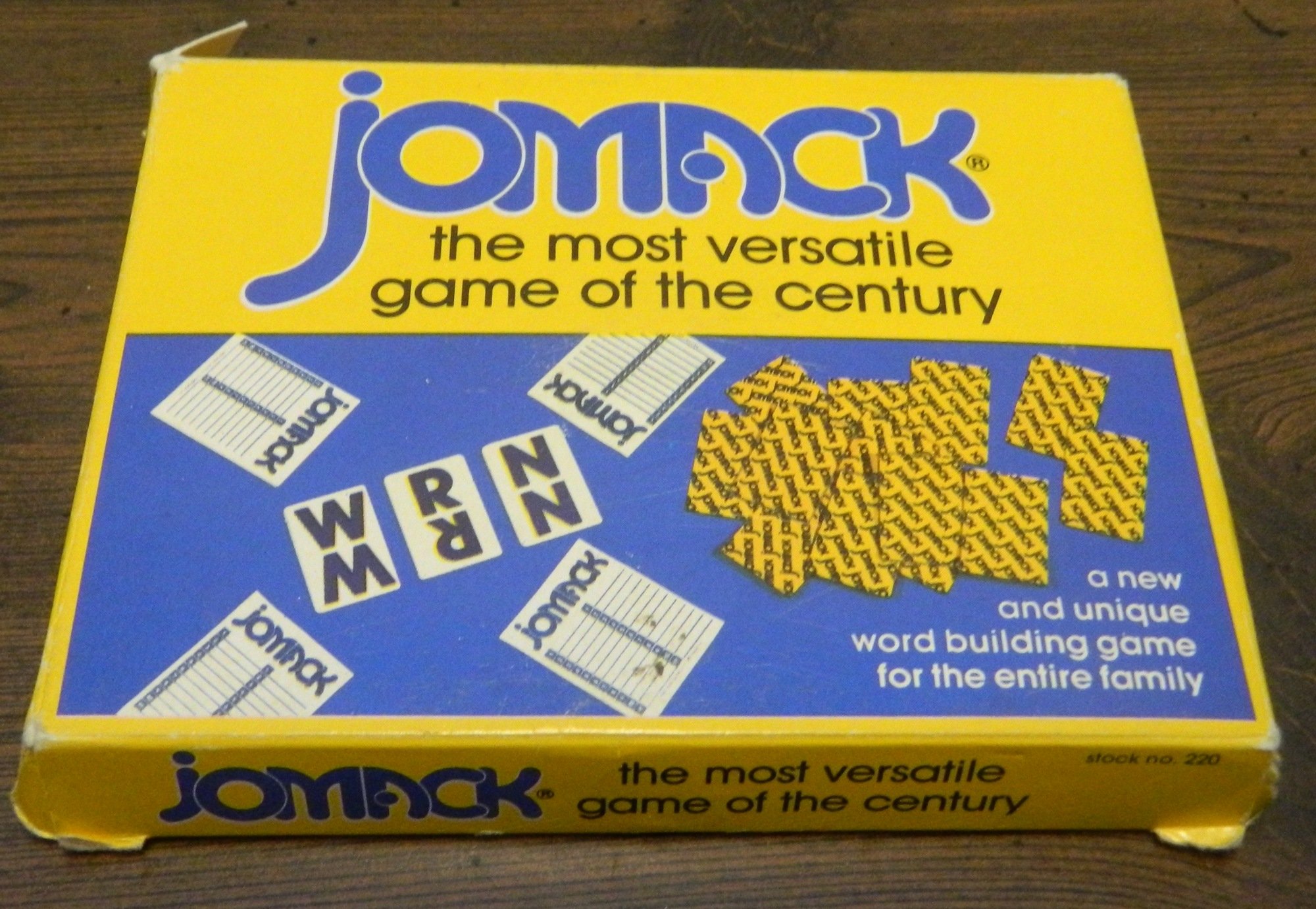 The first person to call out a correct word scores a point for the round. The player who answered first writes down the word they used and can’t use it anymore for the rest of the game. All cards used for the round are returned to the pile and a new round begins. The next player to draw cards is the player to the left of the player who drew cards for the previous round.

Five of the cards in the deck are blank cards. Any blank card that is drawn means that players have one less letter that they have to use in their word. The number of blank cards drawn has an effect on how the round is played.

The first player to win eleven rounds wins the game.

Here are some of the Jomack game variations that play similar to the Original Jomack but tweak some of the rules.

Team Play: Players work together in teams and the first team to score 21 points wins the game.

Junior Jomack: If younger players are playing the game they are allowed to form a word with two of the three letters drawn instead of having to use all three letters.

Solitaire Jomack: In Solitaire Jomack the player writes down all of the letters in the alphabet on a sheet of paper. Each round they draw two cards and must create a word with those two letters and the next letter on their sheet. Players score points for every additional letter (other than the letters drawn and the next letter on their sheet) for each round. After all of the rounds have been played, the player tallies up how points they were able to score.

Category Jomack: Category Jomack is played liked normal Jomack except that all words provided have to fit within a specified category. In this variation only two cards are drawn per round.

Jomack is a pretty simple little card game that relies on players spelling words with the cards that are drawn. The rules are quite straightforward and take minutes to learn. You could teach the game to a new player and be playing the game a couple minutes later. The game is simple enough that younger children could play the game as long as they have decent spelling skills.

Speaking of spelling I think Jomack, like a lot of these type of word games, could work pretty well as a game to help children with their spelling. With younger children you will have to use the Junior Jomack rules but I think younger children shouldn’t have a problem with the game and I think it could help children quite a bit with their spelling and vocabulary skills since the whole game is focused on spelling/vocabulary.

As a whole I had fun with Jomack. The game is far from original but if you like word games I think you could have fun with Jomack. The game is simple to play but also works well as a word game since it tests your vocabulary skills and players with strong vocabularies have an advantage in the game. The game also plays really quickly since you could probably finish a game in 10-15 minutes.

The biggest problem for most word games is a lack of originality. That is the case with Jomack as well. Basically Jomack is your typical spelling game. You draw cards and try to form words with the letters drawn. I have played several other word games that have played almost exactly the same with only a couple minor differences. This doesn’t mean that Jomack is a bad game but if you own one of these other games it probably doesn’t pay to pick up Jomack as well.

Other than originality, Jomack’s biggest problem is that the game rewards speed over skill. Basically the only way to win the game is to be fast. You could have a very strong vocabulary and have no chance of winning the game if you can’t quickly blurt out a word. Rounds usually take seconds to finish. While it would be nice to come up with longer words you need to just blurt out the first word that comes to your mind since the first player to come up with a word is the only player that scores points.

Playing the game with the original rules emphasizes this point. There is no difference in coming up with a four letter or ten letter word since both are worth the same number of points. This is why I would highly recommend using the point rules. Using the point rules doesn’t fix the need for speed since you still have to be the first player to answer but it rewards players that can actually come up with long words. A player that can come up with a ten letter word will gain a lot of ground on a player that only makes four and five letter words.

When playing these types of games my group likes to try and develop house rules to fix some of the problems we encounter in the game. In Jomack we tried to experiment with ways of making each round last a little longer. It is too easy to find a word that uses three letters so most rounds only last seconds. This hurts the game since you don’t even have time to really think. Since we have tried it with other games we thought we could make the game a little more difficult if we added more cards for each round. We tried playing a couple rounds with four or five cards instead of three. This did indeed make the game more challenging but actually made it too challenging since it became really hard to actually find a word that used the four random letters drawn. If you really want a challenge I might recommend it but you will have quite a few rounds where no words can be found.

Component wise the game is very basic. The game just comes with cards that have letters printed on them and some score sheet pages. You could easily make your own version of the game using flashcards or writing the letters on sheets of paper or index cards.

Jomack is not a bad game. I had some fun with the game and it is very easy to learn and quick to play. I also think the game has some value as a teaching tool to help children with their spelling and vocabulary skills. The biggest problem is that the game is just not that original. I have played other word card games that play pretty much exactly the same as Jomack. The rounds also move way too quickly to the point where speed is the most important skill in the game since it is more important to get a word out quickly than it is to find a longer word.

If you don’t like word games or already have a similar game I would recommend avoiding Jomack unless you find it for really cheap. If you like word games though and don’t have a game like Jomack in your collection, it might be worth looking into the game.