Get all six of your chips to the 97 space on the game board.

Each player takes a die, a die shaker, six chips, and a game board. All six chips are placed on the blank spaces at the bottom of the game board. Each player rolls their die. The player who rolls the lowest number gets to play first. Play then continues in a clockwise manner.

To begin their turn a player rolls their die.

In order to move one of your game pieces from the bottom row onto the game board you must roll a one, two, or three. If a player rolls a one they place one of their pieces on their one space. If they roll a two they place it on the two space and with a three they place a piece on the three space. If there is already a piece on the corresponding space on the game board, another piece cannot be placed on that space because two pieces may not occupy the same space. 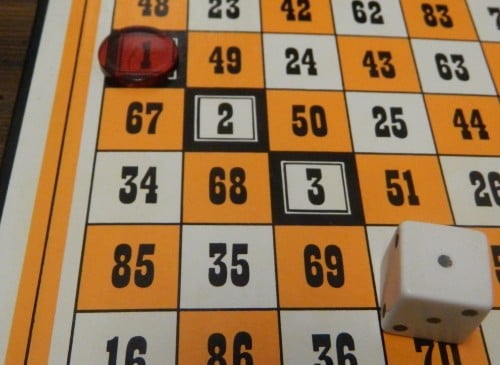 The player rolled a one. They can move one of their chips from the bottom row to the number one space.

The player’s other choice is to move their piece up the number spaces rolled. If the player chose this option and they rolled a two while on the 10 space they would move up two spaces to the 57 space. 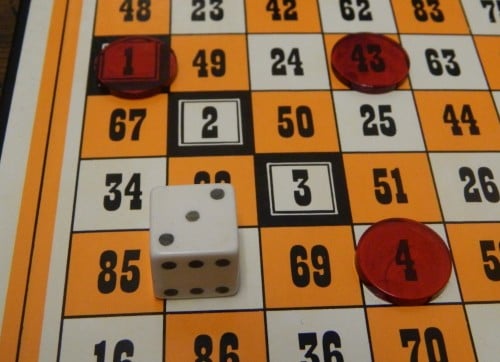 If either option has the player land exactly on the 97 space, the piece has reached home and stays there for the rest of the game. If the player rolled a number higher than what is needed to reach space 97, that option can’t be used since a piece can’t be moved past space 97.

If a player rolls a minus number (4, 5, 6) and they don’t have any of their pieces on the main part of the game board, they can’t use their roll and play passes to the next player. If the player has a piece on the main game board they have two choices on how to use their minus number.

The player otherwise could move a piece down the number of spaces equal to the number rolled. If the player has a piece on space 50 and they rolled a six they could move their piece down to space 56. If by using this option a playing piece would be moved down to the row without numbers or even further, this option is not allowed. 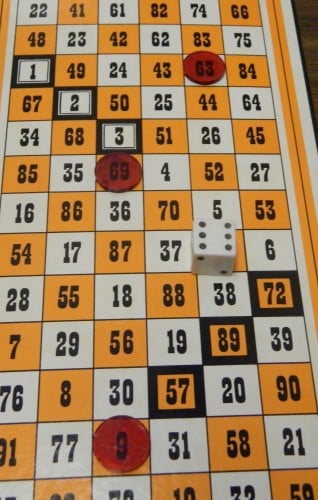 If the player wants to move their chip that is on space 69 they can subtract six and place the piece on space 63. They could also move the piece down six spaces to the nine space. The two options are indicated by the other two chips on the game board. 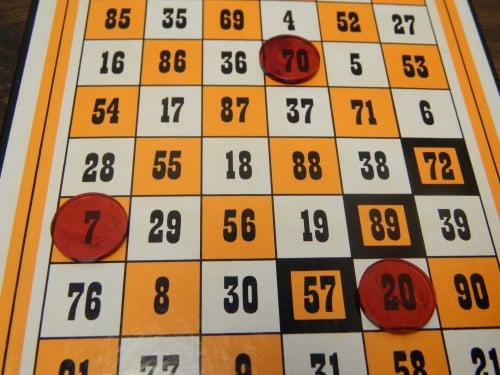 The player currently has pieces on spaces 70, 20, and 7. Since these spaces add up to 97, all three pieces will be moved to the 97 space.

Bonus Numbers: If a player has one of their pieces land on space 57, 72, or 89 they get an extra free roll and move. 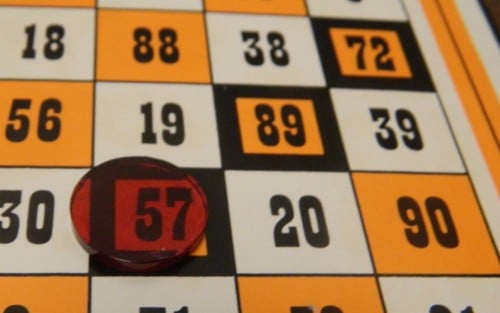 One of the player’s tokens landed on space 57 which gets them an extra turn.

Penalty: If a player lands on a space that another player already occupies on their own board, the current player knocks the other player’s piece back to the start space.

Both of these game boards have a piece on the same space. Whichever piece moved to this space on this turn, knocks the other player’s piece of the space.

Locating Numbers: If you are having trouble locating a number, numbers are situated in a sequential order from the top left moving diagonally to the right.

The first player to get all six of their pieces to the 97 space wins the game.

This player has won the game because they have gotten all six of their pieces to the 97 space on the game board.

If you look at Ninetyseven the first thing that will catch your attention is how bland/boring/ugly the game is. If you are looking for a visually stimulating board game, Ninetyseven is not it. The game looks so bland. I don’t know if I have ever seen a gameboard with blander artwork. The gameboard is pretty much just a set of squares with numbers inside. If you want something pretty to look at, Ninetyseven is not it. It is a game that relies solely on its’ game mechanics instead of visuals. Being made in 1971 by a smaller publisher this is somewhat to be expected. Appearance wasn’t nearly as important in older board games. While the game might not look great, beneath an ugly exterior lies a very solid math based strategy game.

As a whole Ninetyseven is an interesting little game. The concept is pretty simple since the objective is to add or subtract to try to get your pieces to space 97. If that was all there was to the game, it wouldn’t be much since you would just move forward and backwards and the luckiest player would end up winning the game. What makes the game strategic is the option to move your pieces up and down rows. This gives the game a bunch of flexibility which is the most interesting part about the game.

There are two basic strategies in the game. First is to position your pieces towards the top of the game board in order to move them up rows and onto the 97 space when you roll an addition number. The other main strategy is to just keep trying to increase the number of each of your pieces which will eventually allow you increase them to 97. The combination of both strategies gives you a lot of options in the game which means you need to fully utilize both avenues for moving pieces.

One other strategy is to use the ability to add multiple pieces together in order to reach 97. This is the quickest way to get pieces to the finish but it also adds the most complexity to the game. If you can utilize it though you can either get out to a big lead or catch up quickly. It sometimes gives players too many options for a given turn though. At one point in the game I had five pieces on the game board. Each time I rolled the dice I had ten different moves that I could make. This doesn’t sound that bad but when you are trying to figure out if you can get a “97” combination this could take a long time to run through all of the different possibilities. Unless you are a math genius you are unlikely going to be able to go through all of the possibilities unless you want to spend ten minutes on a turn.

While the game is pretty basic, players with good math skills are going to have an advantage in the game. The game uses simple addition and subtraction but players with stronger math skills are going to be able to run through their different options much quicker which should give them an advantage in the game. I think younger children could practice their addition and subtractions skills with the game, but I think children are going to have a hard time understanding the strategic side of the game.

Ninetyseven is not going to be for everyone but it is not a bad game. I had fun with the game and I plan on keeping it. It has some issues which I will get to next but if you like abstract games I think you can have fun with the game. I really haven’t played another game like it before. It makes you think out your moves especially if you have quite a few pieces out on the gameboard. The game also seems to do a good job keeping all of the players in the game unless one player has exceptionally good or exceptionally bad luck.

The biggest problem I have with Ninetyseven is that it has a big analysis paralysis problem once you have more than two pieces on the game board at the same time. If you like to run through all of the possible choices you are likely going to be a pain to play the game with. You could spend a lot of time analyzing all of your different options while the other players have to sit there waiting for you. When these situations come up you really need to put a time limit on how much time you are going to take to analyze your options and then just make a decision. To keep the game enjoyable you need to be willing to make moves that might not always be optimal.

Ninetyseven is probably one of the ugliest/blandest games I have ever played. Just looking at the game you would probably think that it is a terrible game but it is actually not that bad. The game is simple to play but has a lot more strategy than you would expect. This leads to the game’s biggest problem though since Ninetyseven has the potential for a huge analysis paralysis problem.