Any regular readers of Geeky Hobbies will know that we absolutely love the Codenames franchise. I have played close to 1,000 different board games and I have to say that Codenames is easily in the top five that I have ever played. Because of this we have already checked out two of the spinoff games Codenames Pictures and Codenames Duet which we also enjoyed quite a bit. While I knew the game would not differ much from the original game, I was excited to check out Codenames: Disney Family Edition as I am a big fan of Disney in addition to Codenames. While it doesn’t quite live up to the original game, Codenames: Disney Family Edition maintains the highly enjoyable gameplay of the original mixed with the whimsy of Disney.

Both Cluemasters will look at the Key Card. The Key Card will show a grid with different colored spaces. The goal of the game is for the Cluemaster to give clues to their teammates to guess the cards corresponding to the spaces on the grid that are their color. The yellow/tan spaces in the grid are neutral and belong to neither team. The black space corresponds to the card that neither team should pick.

A team’s turn begins with their Cluemaster trying to come up with a clue. When coming up with a clue they should try to find one that corresponds to two or more of their cards while also not leading their teammates to guess an incorrect card. The clue can only be one word. The only rules that must be followed while giving the clue is that it has to be about the content of the cards. For example you can’t give a clue regarding the location of cards or related to the spelling of the cards. The Cluemaster will also give their teammates a number. This number will tell the teammates how many cards the clue corresponds to. 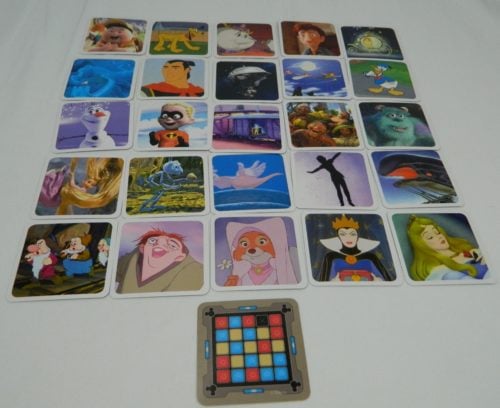 For a clue the Cluemaster has decided to use “crown 2”. This clue is referencing the two cards in the bottom right corner as they both are wearing a crown.

If one of the teams picks the card corresponding to the black space, they will immediately lose and the other team will win.

Otherwise the team that is able to cover up all of their cards first will win the game. This can happen on the other team’s turn. 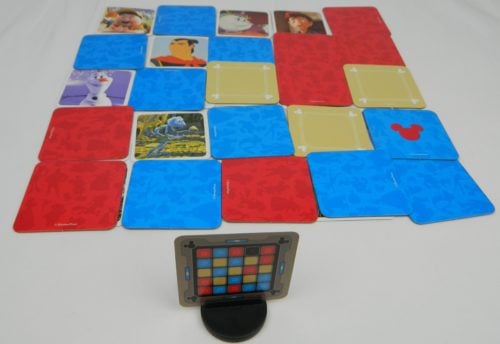 The blue team has successfully covered up all of their spaces so they have won the game.

If you are already familiar with Codenames or Codenames: Pictures these are the only changes to the game that you need to be aware of.

As this is the fourth Codenames game that I have checked out, I will say that I have covered the basic gameplay several times. As I don’t want to repeat myself I am going to give more of an overview of my feelings towards the overall gameplay and instead focus on the differences that the Disney edition brings to the game. If you want a more detailed look into my thoughts on the main gameplay, be sure to check out our reviews of Codenames, Codenames Pictures, and Codenames Duet.

I kind of already spoiled my thoughts on the main gameplay when I said that the original Codenames is easily one the top five board games that I have ever played. That is saying a lot as I have played close to 1,000 different games. While I didn’t enjoy Codenames: Disney Family Edition quite as much as the normal game (more on this soon), I will say that it maintains the same enjoyable gameplay that the series is known for. I think the game’s success can be boiled down to a couple things.

Codenames is the perfect balance between simple gameplay that remains challenging enough to keep you hooked. It may take a game or so for new players to adjust to since it is probably quite a bit different than most of the other games that they have played before. After that though the game is really easy to play. The game has a recommended age of 8+ and that seems about right. The gameplay is a mixture of a word and party game that work perfectly together. The Cluemasters need to analyze the cards and try to find a clever connection between their assigned cards that their teammates will also likely interpret in the same way. Meanwhile their teammates need to try and figure out what their Cluemaster was trying to tell them. This gameplay mechanic is so simple and yet it works so well. As the grid is randomly assembled before every game, you will never play the same game twice. It is also hard to not feel a strong sense of accomplishment when you are able to complete a round where you correctly guess three or four cards with one clue. Simply put Codenames is a fantastic game and is almost as close to perfect as a board game could possibly hope to achieve. I honestly can’t recommend the game enough.

So let’s move onto Codenames: Disney Family Edition. Just as I expected the gameplay is very similar to the other games in the series. The only differences are minor and mostly cosmetic. I would say the only new mechanic is that the game includes an easier mode. I would probably only use the cards with younger children and people new to the game though. I would say that the game kind of feels like a combination of the original game and Pictures. The cards are double sided with words on one side and pictures on the other. Basically the word side and the picture side are the same as the word side is just a word representation of the picture. While I prefer the original Codenames over Pictures, in the case of this game I actually preferred the picture side for a reason that I will get to shortly.

The biggest change to the game is just the fact that the game utilizes the Disney theme. The words and pictures mostly highlight various characters from Disney and Pixar films. Instead of having more abstract concepts to connect to one another, you need to utilize your Codenames skills to connect Disney characters. For the most part the game utilizes the theme well. The pictures are stills from the films, but the artwork still looks really nice. The quality of the components in general are really nice. Fans of Disney movies should really appreciate the game’s theme.

The Disney theme does lead to most of the issues that I had with this version of Codenames though. I don’t have a problem with the Disney theme as I am a big fan of Disney. The gameplay is still fantastic and I would still highly recommend the game. It just doesn’t live up to the main game mostly because of the theme. This is due to a couple of reasons.

First as the game utilizes the Disney theme, to do well in the game you need to be pretty knowledgeable about Disney. If you are interested in a Disney version of a game this should be kind of obvious. The normal Codenames and Codenames Pictures utilize more generic words/pictures allowing them to appeal to a more broad audience. You didn’t really need previous knowledge of a topic in order to do well in the game. Coming up with and interpreting good clues is all that was needed in order to succeed. To do well in Codenames: Disney Family Edition you need to have a pretty decent knowledge of Disney films in order to do well. You could use basic clues to get a card here and there. People who know Disney better will have a distinct advantage in the game though as they will be able to give clues that relate to more cards at the same time. Most of the characters/pictures are pretty recognizable, but some of the characters pictured are secondary characters that you might not be that familiar with if you don’t know the movies that well. Thus people with more knowledge of those movies will have an advantage in the game.

The other main problem with the theme is that it just limits the gameplay in my opinion. With the normal games there was quite a bit of variety in the words and pictures. This gives players a lot more freedom in coming up with clues. This leads to more creative clues and more out of the box thinking which is where the game excels. With all of the cards being based on Disney films though this really limits the type of clues that you can give. There just isn’t a whole lot of variety among the cards visible at any given time. Many clues end up coming down to the films that the characters appear in. Ultimately there just isn’t the same level of creativity in the clues.

This leads to the biggest issue that I had with the game. I honestly found it to be considerably harder to come up with clues that matched multiple cards at the same time. If you are lucky enough to get several cards from the same movie the clue is quite obvious. This is a rare occurrence though as there usually will be at least one card that will throw out that strategy. You then need to come up with more abstract clues which are just harder to do with Disney characters. This is disappointing as coming up with clever clues that get your team multiple cards on a turn is arguably one of the best parts of Codenames. At times this is still present in Codenames: Disney Family Edition, but it is far less likely to occur than other versions of the game.

After reading my thoughts on Codenames: Disney Family Edition you might not think that I enjoyed the game. That is far from the truth as I still really enjoyed the game. It maintains almost all of the elements that I have always enjoyed about the franchise. The gameplay finds the perfect balance between simplicity and complexity where the game is easy enough for almost anyone and yet challenging enough to keep your interested. The gameplay is so original and enjoyable. Codenames: Disney Family Edition doesn’t quite live up to the other games in the series though, and a lot of it has to deal with the Disney theme. The game uses the theme well where Disney fans should really appreciate the game. The theme creates some issues for the gameplay though. You need a certain level of Disney knowledge in order to do well in the game. With all of the cards being Disney related it leads to a lack of variety which hurts the clue giving aspect of the game, as it is much harder to come up with clues that tie multiple cards together. 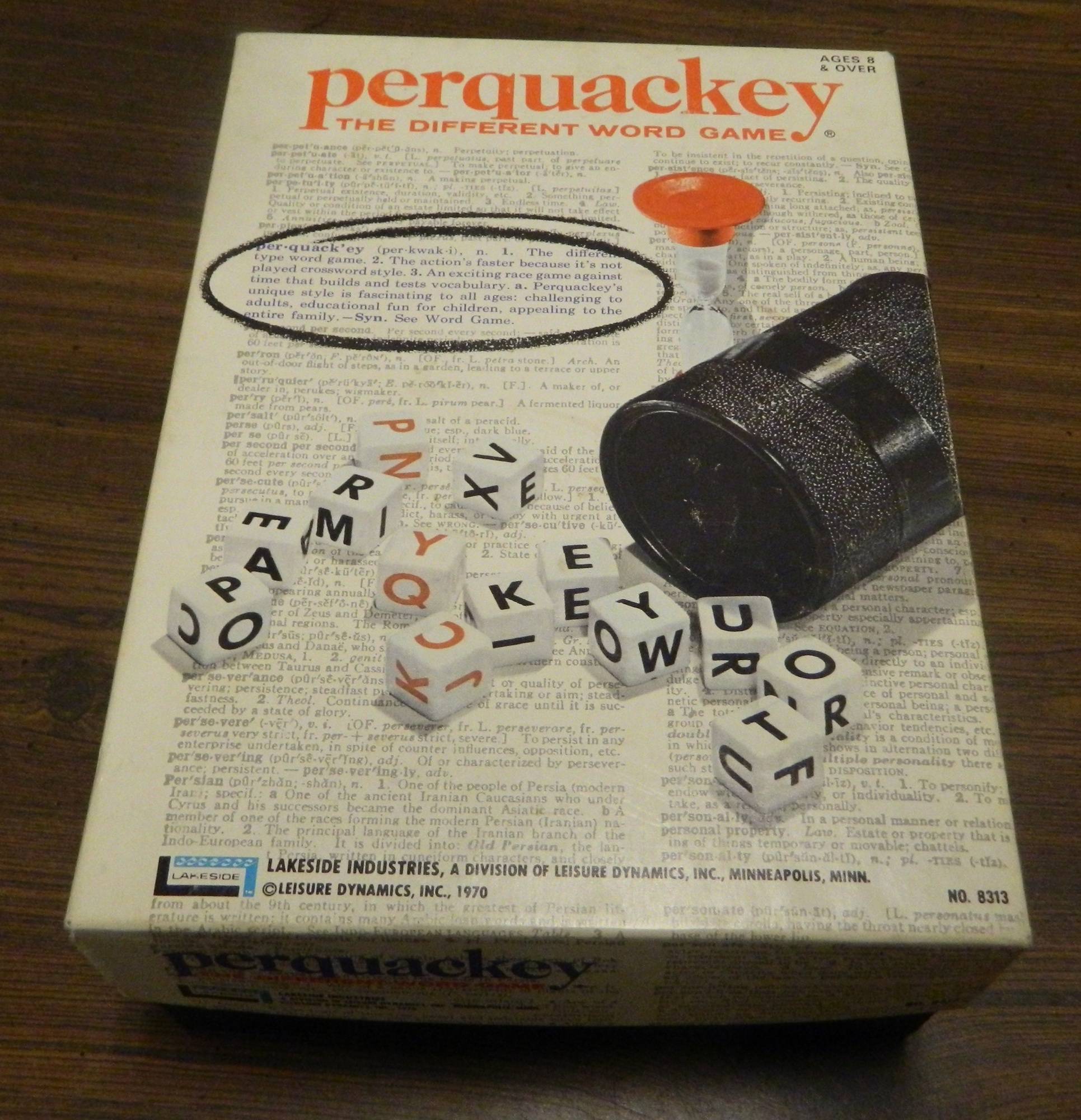 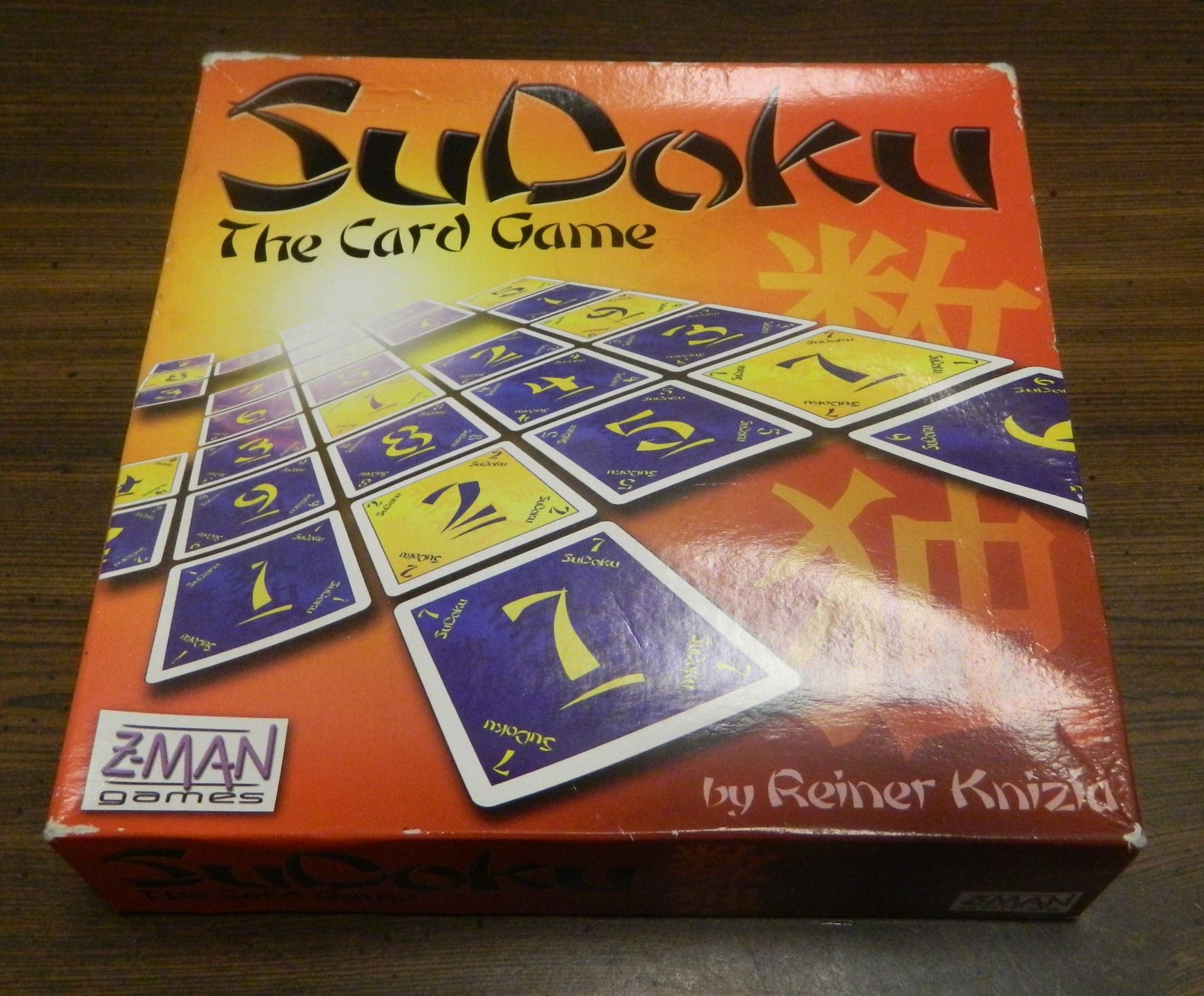 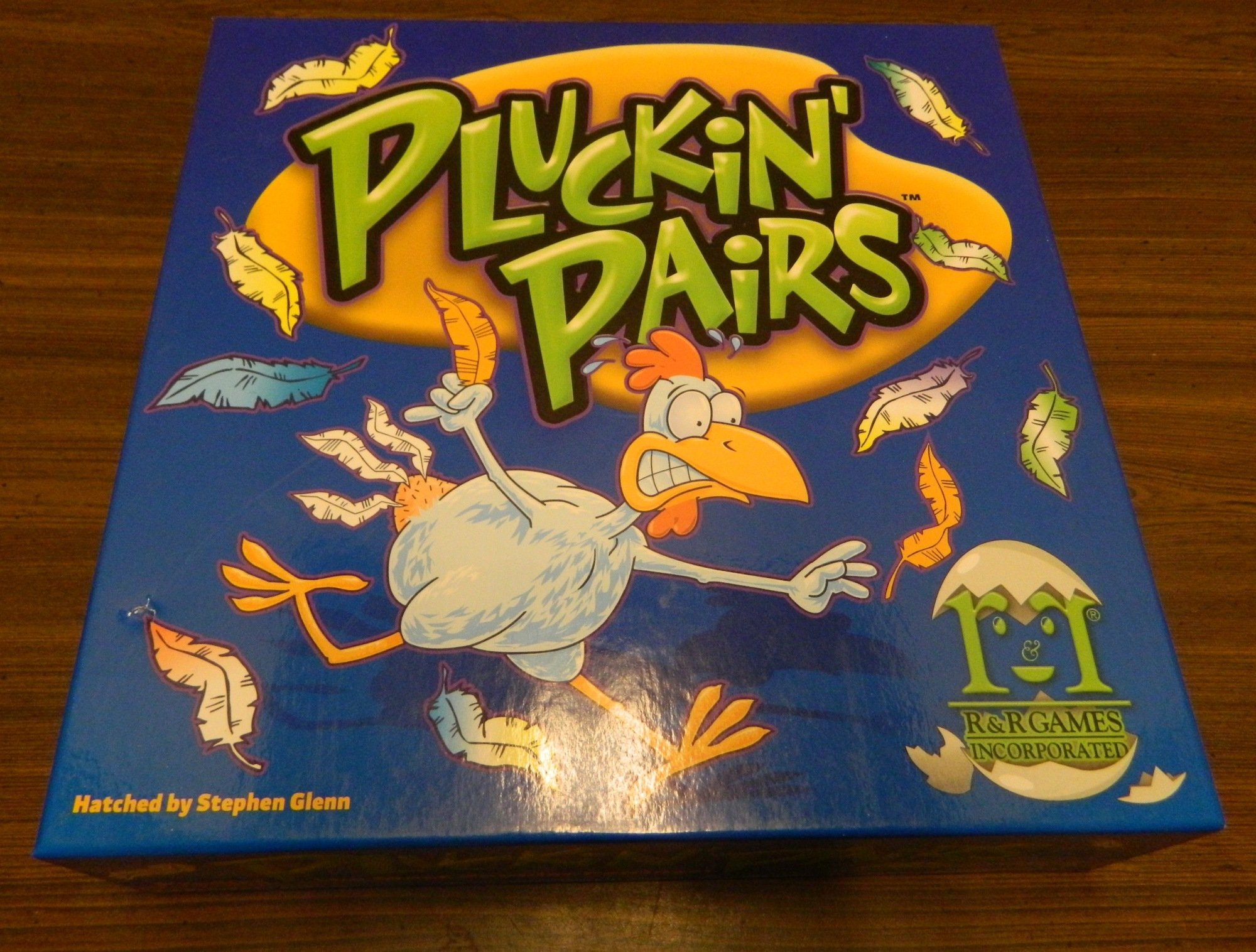 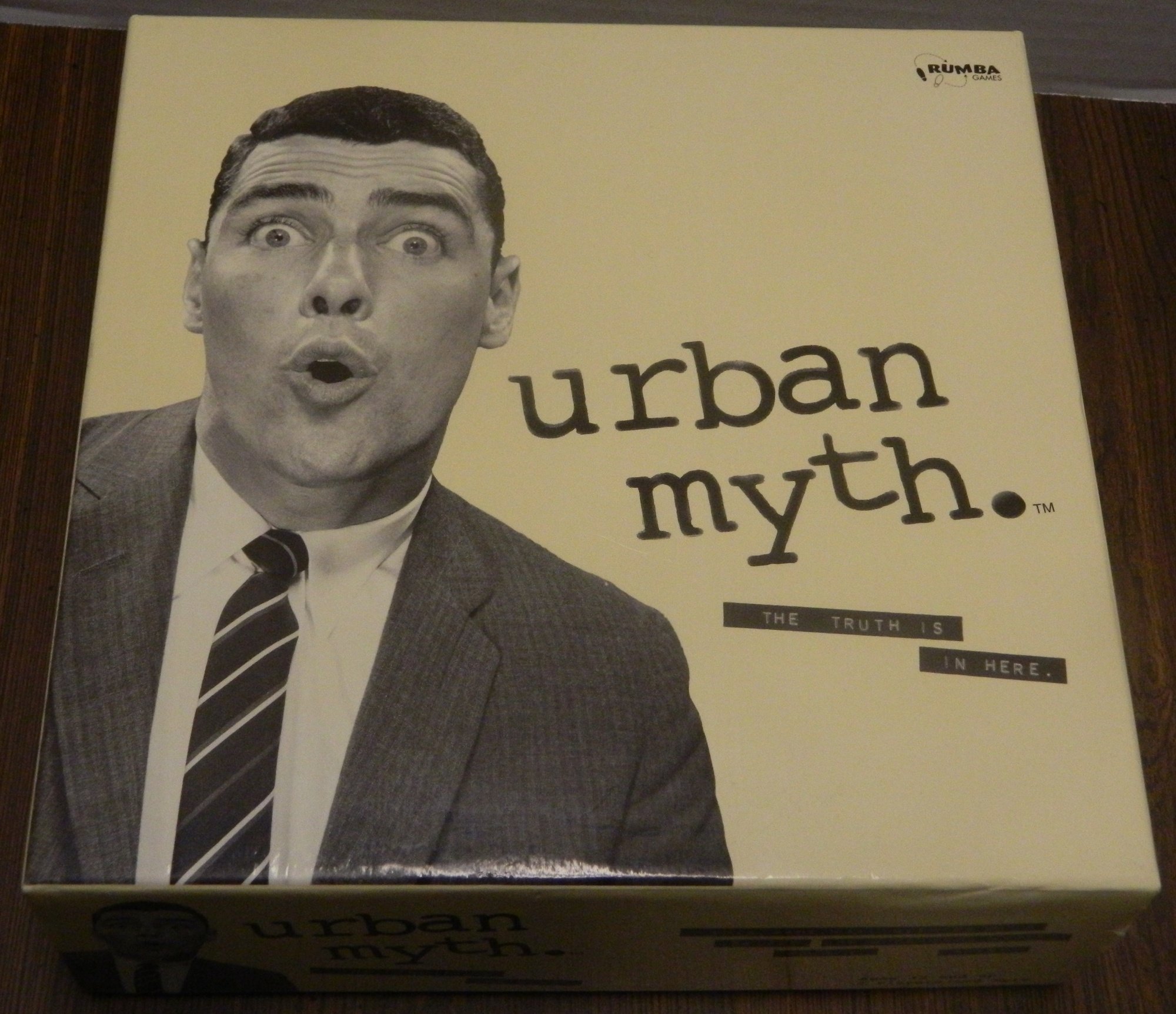