Released back in 2015 Codenames was one of those games that took the board game scene by storm. Eventually winning the Spiel Des Jahres in 2016, Codenames has already become one of the highest rated board games of all time. Codenames is a really interesting idea because it combines a spy theme with a party word game. While it was hard not to hear about how great Codenames was, until recently I didn’t have the opportunity to try the game. So does it live up to its’ hype? It might not be quite perfect but Codenames is the best party word game that I have ever played.

How to Play Codenames 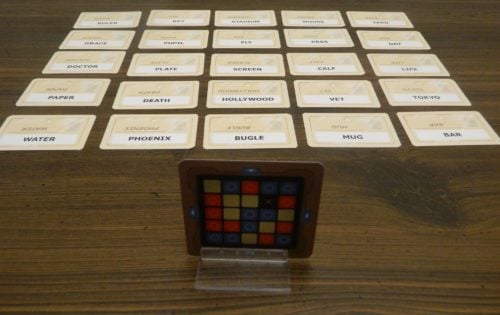 The red team has to guess stadium, grace, day, doctor, paper, death, Tokyo, and mug. The blue team has to guess key, mouse, yard, screen, calf, Hollywood, water, phoenix, and bar. If either team picks “pass” during the game they will automatically lose.

Starting with the spymaster for the first team, each team will take turns trying to get their teammates to pick the words corresponding to their agents. Each spymaster gives their team a one-word clue. When giving clues the following rules must be followed:

If a spymaster gives an invalid clue their turn ends immediately. The other team’s spymaster also gets to cover up one of their agent words.

After giving the clue the spymaster decides how many of their agents’ codenames can be described by the clue they gave. This number can’t be used as a clue for the word(s) they want their teammates to guess. 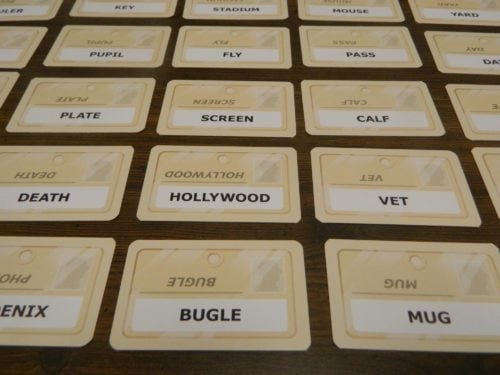 This team’s spymaster has decided to give the clue “movie 2”. With this clue the player is trying to get their teammates to choose Hollywood and screen.

The other players on the team then have to try and figure out what words the spymaster was hinting towards. When the players have agreed on a word one of the players points to the word they choose. The spymaster then reveals the identity of the word chosen.

If the team guessed one of their own agents they may have the opportunity to make another guess. The team can make as many guesses as the number the spymaster gave as part of their clue plus one. The team can also choose to end their turn at any time after they have made one guess. Once a team has either made all of their guesses, picked a word that doesn’t match one of their agents, or have decided to stop; play passes to the other team.

If a team picks the assassin, the other team wins automatically.

Otherwise whichever team has all of their agents revealed first wins the game. 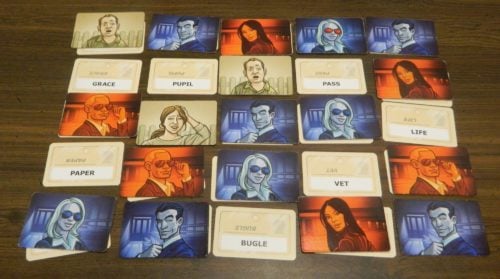 The blue team has revealed all of their agents so they have won the game.

My Thoughts on Codenames

If I hadn’t already known about Codenames and someone would have told me about a board game that combined a word game with a spy theme, I wouldn’t have known what to think. The concept is interesting but I would have wondered how that concept would even work. It might have seen like a weird combination at first but it works perfectly for Codenames.

Having played hundreds of different board games I have seen a lot of different mechanics. In particular I have played a lot of word and party games. Despite playing so many different games in both genres, I can confidently say that I haven’t played a game that plays quitehttps://www.geekyhobbies.com/game-of-the-generals-aka-salpakan-review-and-rules/ like Codenames. The premise behind the game is just so clever. Each team is trying to contact their agents using their codenames. Only one of the team members know the identities of their agents though so they have to give clues to help their teammates find all of their agents.

What is so great about Codenames is that the main mechanic is so engaging. Codenames really only has one main mechanic but it works so well that there is no need for other mechanics. The reason that Codenames is such a great game is because the game is accessible while also giving players plenty of options. The mechanic is so simple that you can teach the game to new players in minutes. Children and people who rarely ever play board games can easily pick up the game. Codenames is one of those party games that you can use to try and get people more interested in board games.

In addition to being accessible, Codenames is just a ton of fun. The main mechanic is just so satisfying. Instead of wasting time on mechanics that just extend the game, Codenames focuses on the one mechanic that is pure fun. By the end of your first game you will be begging to play another game.

While Codenames is an accessible game I also think it has a decent amount of strategy. I think the most interesting decision in Codenames for the spymasters is deciding how aggressive they are going to be. If you play the game really passive you will likely always pick your own agents but you likely will only get one or two agents each turn. Your team will also likely fall behind the other team. Spymasters can also choose to be more aggressive using clues that apply to more of their agents. If successful this can lead to a team getting a large lead in the game. If unsuccessful it could lead to picking an innocent bystander, one of the other team’s agents, or worst the assassin.

So is it good to be aggressive or passive? I think it is best to be somewhere in the middle. If a team is too passive the other team will likely get far ahead and can then cruise to victory. If you’re too aggressive though you could end your turn early, give the other team one of their agents, or even lose the game for your team. For your first clue you probably want to aim for three or four agents if possible as long as the clue doesn’t apply to the assassin. If you are more aggressive at the beginning of the round you can then be more cautious with the last couple of agents as they likely won’t really connect to one another.

In addition to being a good idea strategically, playing somewhat aggressive is key to making the most out of the game. Giving one clue for each word gets boring pretty quickly. There is no challenge in giving obvious clues. On the other hand taking a chance can be so rewarding. Trying to think of clever clues that apply to several of your agents makes the game. You get a real a sense of accomplishment from coming up with a clue that gets your team to guess four or more of your agents.

One of the things that make you want to keep coming back to Codenames is the fact that the game can become quite tense. What I mean by tense is that the game can drastically change at any time. A team could be destroying the other team and then choose the assassin and automatically lose. Choosing one of the other team’s agents can also swing the momentum as you help out the other team and lose the rest of your turn. The game is tense because any clue or choice can totally change the game. If one team is significantly more experienced in the game they might blow out the other team. Most games will end with both teams being really close to one another though. In every game I played I think the winning team won by only one or two agents. The game being close until the very end makes for a tense but very enjoyable experience.

While Codenames is one of the best games that I have ever played, it is not perfect. The main complaint I have with Codenames is that it does rely on a little luck. Basically one team may be given an advantage solely based on how their agent words connect to one another. One team could be given a lot of words that can be connected to one another while the other team doesn’t. This will give the team with more connected words a pretty big advantage in the game. Generally both sides will be pretty balanced but there will be the occasional game where one team has a significant advantage at the beginning of the game. With the game being randomly set up each time though this couldn’t have been avoided. Each game is also short enough (around 15 minutes) that it doesn’t become that big of a problem. I will take the variety of randomized games in exchange for an occasional game where one team is given an advantage.

On the component front Codenames also excels. The quality of the components is basically what you would expect out of a party game. The artwork is nice even if most of the cards just feature words. The best part of the components is the fact that the game gives you a lot of cards. Between 200 words cards (which are double sided) and 40 key cards, I honestly can’t see two games ever being the same. If that would ever happen you probably have already played the game hundreds of times and already got your money out of the game. Even if you got sick of the words included with the game it wouldn’t be that hard to make your own word cards. I don’t think you will ever have to worry about Codenames getting repetitive.

Should You Buy Codenames?

Codenames might not be the best board game that I have ever played but it is near the top. It is the best party word game that I have ever played and I can’t see that changing anytime soon. What is so great about Codenames is that the main mechanic is so unique. I have played a lot of board games and I have never seen a mechanic like it. The game is really easy to play and yet still requires quite a bit of strategy/skill. The game is tense as the outcome of most games won’t be decided until the very end. The only small complaints I have with Codenames is that occasionally one team will get an advantage due to luck and you sometimes have to wait around for the other team. Those small complaints are quickly forgotten as it is hard to not want to immediately play another game of Codenames.

If you would like to purchase Codenames you can find it online: Amazon

[…] of board games recently has been the party word game. Some of my favorite more recent games include Codenames, Cross Clues, and Just One. What I like about these games is that they do a good job creating […]