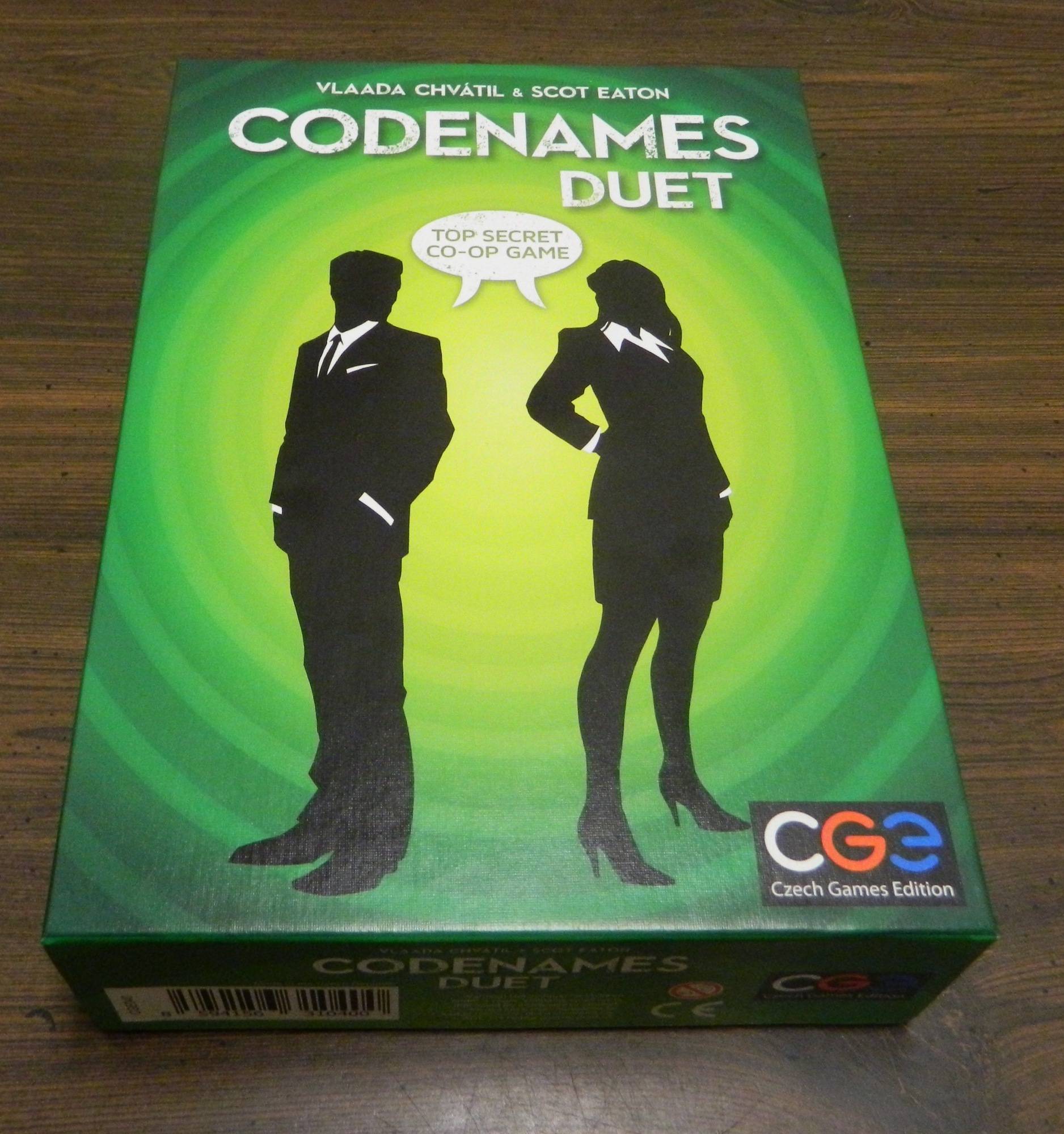 How to Play Codenames Duet

Before players start the game they should study their side of the key card. The green spots indicate words that the player is trying to get the other player to guess. The beige spots are innocent bystanders and the black spots are the assassins.

Either player can start the game. On a player’s turn they will have to come up with a one word clue and a number that describes one or more of the word cards that they want the other player to guess. If a word card is already covered up by a green agent card, it doesn’t have to be guessed again. When coming up with a clue the player should try to avoid clues that would lead the other player to guess one of the bystanders or assassins. Clues must also follow these rules:

Along with the one word clue the player has to give a number. This number indicates how many of the words that you think the clue applies to.

After the clue is given the other player studies the cards and chooses one of the word cards. When making a guess a player can use the current clue or any previous clues to make their choice.

If the chosen card relates to a bystander, the player takes one of the bystander tokens and places it on the card with the arrow pointing to the player that made the guess. The player’s turn then ends and the other player must give a clue.

If the chosen card relates to one of the assassins, the assassin card is placed on the word card. The players will also automatically lose the game.

When the player decides to stop making guesses; they take one of the bystander tokens, flip it to the timer side and place it in front of themselves. The other player will then give their next clue.

When a player is guessing, the other side of the key card is what matters. Some words are agents for both players. Other cards are assassins or bystanders for one player but are different for the other player. In these cases the outcome depends on the clue givers side of the card. For example if a player selects a card that is an agent on the other player’s side but an assassin on their side, the card will be treated as an agent. Here are the distribution of the agent and assassin cards:

When one of the players have had all of their agents guessed, they tell the other player. That player will be giving clues for the rest of the game.

The game can end in one of three ways.

If one of the players guesses the assassin, the team loses.

In order to add some variety to the game players can choose to use the mission map. Once a team has completed a standard game they can cross Prague off the map. The players then can choose a city connected to one of the cities they have already completed. Each city on the map has two numbers.

The first number indicates how many timer/bystander tokens will be used in the game.

My Thoughts on Codenames Duet

As I recently reviewed the original Codenames I don’t think it really pays to rehash what I talked about in that review. Basically Codenames is a fantastic party word game where players have to give clues to their teammates in order to guide them towards picking the right word cards. The original game shows that all you need for a great board game is a fun and original game mechanic. Instead of repeating myself in this review I want to talk about how Codenames Duet differs from the original game.

If the name didn’t already make it clear, Codenames Duet is the two player cooperative version of Codenames. While Codenames Duet was created as a two player game it can be played with more players. Two or more players will just work together to give clues and try to decode the other players’ clues. In Codenames Duet instead of two teams competing to see who can find all of their agents first, the players are working together to find all of the agents before time runs out. All of the players can play as the spymaster since both sides of the key card only show half of the agents. The players on each side of the table will take turns giving clues to try and get the other side of the table to guess the correct cards.

While Codenames Duet is lacking some of the competitiveness of the original Codenames (due to no longer competing against the other team), I think the cooperative aspect also improves upon the formula. One of the biggest benefits of making the game cooperative is that it eliminates players having to wait around for the other team. Instead of waiting for the other team you will either be coming up with your next clue or trying to decode the clue that the other player gave you. There is also no need to fight over who is the spymaster as all of the players get to be the spymaster in Codenames Duet.

For the most part Codenames Duet shares the same main mechanics as the original game. You still give out clues and try to figure out what words the other player’s clues refer to. The only real change to the main mechanics involve the number of guesses that a player can make. In the original Codenames you could only make up to one more guess then the number provided by the spymaster. In Codenames Duet you can make as many guesses as you want as long as you avoid bystanders and the assassin. Personally I like this change as it makes it easier for a player to pick up the agents that they missed on a previous clue.

The biggest change to Codenames Duet comes from the idea of the “time limit”. In Codenames the only time limit you had was on being able to guess all of your agents before the other team. Since there is no team to compete against Codenames Duet had to find a way to add some challenge to the game. The challenge comes from the idea of the bystander/timer tokens. These tokens limit how many clues can be given in the game. In the basic game the players are able to give a total of nine clues before time runs out and they head to sudden death.

While Codenames Duet shares basically all the same mechanics as the original game, the time limit actually makes the game play quite a bit differently. No longer can players play conservatively if they build a lead on the other team. If you are not at least somewhat aggressive you have no chance of guessing all of the agents in time. While you can get away with some one word clues in the normal Codenames, you really can’t do that in Codenames Duet. You usually need to try for at least two words with every clue or you are going to be left making random guesses at the end of the game.

As you have to get at least two words most of the time, you really have to play the game more aggressively. This means that players will occasionally have to make some guesses. Usually you are best off guessing until you have found all of the words that correspond to the clues that you have been given. This puts more pressure on the clue givers to give clues that the other player could never associate with the assassin words. If you can give clues that won’t lead to a player guessing an assassin, ending your turn early or picking a bystander doesn’t really an adverse impact unless you are using the mission map.

Speaking of sudden death, the mechanic can be kind of exhilarating. Basically sudden death has the players randomly trying to guess the final agents that they are missing. Any incorrect guess automatically ends the round. If you haven’t used all of the clues you have gotten from your partner in the past you have some information that can help you with guessing. Sudden death becomes really interesting when you have no clues left to go off of. Basically the only things you can use involve things like distribution that I just mentioned. You likely won’t pick the right card(s) but it is exciting when you randomly pick the right card. I just so happened to randomly guess the right card in my first sudden death and it was exciting.

Other than the time limit the biggest addition to Codenames Duet is the mission map. Basically I see the mission map as a challenge mode for the game. It doesn’t really change the actual gameplay but it gives the players some interesting challenges. The mission map is used to determine how many bystander/timer tokens you get at the beginning of the game and how they are distributed. This little tweak can actually have a pretty big impact on how you approach a game. Some of the challenges give you more tokens but limit how many bystanders you can choose throughout the game. In these rounds you don’t have to be as aggressive but you have to avoid mistakes. Other challenges give you less tokens which mean you have to be more aggressive in the clues and guesses you make. The mission map doesn’t drastically change the game but I think it brings a welcome challenge to the game for more experienced players.

For people familiar with Codenames, you already know what to expect out of the components of Codenames Duet as they are basically the same. Once again you get a bunch of word and key cards. With so many cards the game presents many different combinations that I think you could play hundreds to thousands of games before you ever encountered a repeat game. Then if you own multiple sets of the game you can easily combine the word cards to create even more possibilities. I like that you can combine the games but I think the game could have distinguished the cards a little more. The only difference in the Codenames Duet cards is two tiny dots in the corner of the cards. The only somewhat unique components in Codenames Duet is the mission map sheets and the agent/bystander cards. Unlike the first game I appreciate that each agent/bystander card has its’ own unique art which is better than looking at the same people over and over again.

While I really like Codenames Duet, I don’t think it is quite as good as the original Codenames. I am not entirely sure why I feel this way as Duet has everything that I really enjoyed about Codenames. If I had to make a guess I think it would be that it doesn’t have as much interaction as the original game. Codenames thrives on playing with larger groups. Codenames Duet doesn’t quite have the same party atmosphere. It does a fantastic job turning it into a cooperative two player game but Codenames is just a game that works better with more people.

Should You Buy Codenames Duet?

If you would like to purchase Codenames Duet you can find it online: Amazon