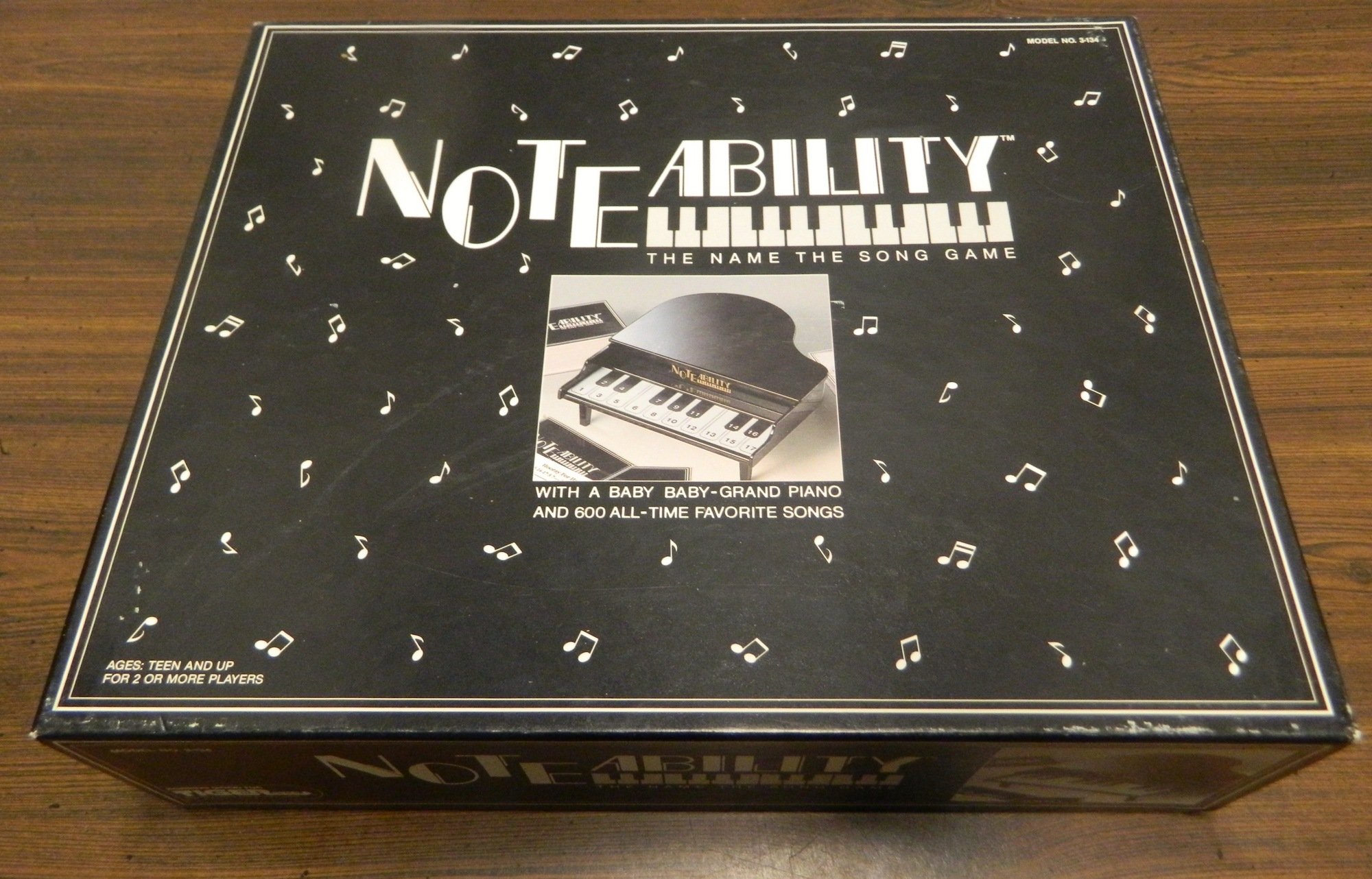 Having played hundreds of different board games, most games tend to start blending together. There are few board games that don’t share quite a few of their mechanics with another game. It is refreshing to find a game that actually does something unique for a change. While I have passed on picking up Noteability for years at thrift stores, I recently acquired the game in a group with several other board games. The first thing that you notice when you pick up Noteability is that it is not your typical board game. That is quickly made clear when you see the electronic piano included with the game. Noteability had the potential to be a truly original game and yet some issues keep it from ever reaching that potential.

Insert the batteries into the piano. If you are playing the team game separate into teams. Choose who will be the scorekeeper.

On each card there are three songs. Each song is composed of numbers, dashes and spaces. For each number the player presses the corresponding button on the piano. For each dash symbol the player has to rest for one beat. Spaces are used to separate numbers on the card but are otherwise ignored.

If you are playing the team game, each team tries to score 50 points as a team. For each round the piano player for each team has to alternate. One team will play a card followed by the next team and so on. The player playing the piano chooses which song they will play first. They can play the song twice. If someone on their team guesses the correct song title, the team scores four points. The piano player then moves onto the next song.

If the piano is not stolen the team passes the piano to the next team after they have attempted all three songs.

In both the team and individual game, the first player/team to get 50 points (or the agreed upon number of points) wins the game.

Basically Noteability is what you would get if you took “Name That Tune” and actually forced one of the players to play the song. One player plays the songs from  a card on the included electronic piano while the rest of the players try to guess the song that the other player was attempting to play. Players score points for guessing the right song titles and for playing the piano well enough that the other players can actually guess the title of the song.

At its’ core Noteability is another music themed trivia game. You basically just guess the titles of songs. Not being a huge music buff this type of game typically wouldn’t appeal to me. The inclusion of the electronic piano is a really clever idea though. I like that Noteability actually tried something new instead of being just another bland music trivia game. I really doubt you are going to find another board game that actually utilizes a mechanic where you play the piano.

Before playing the game I was pretty confident that the piano was going to mostly be just a gimmick. While the piano is not perfect I have to say that I was very surprised by how well it actually works. The piano obviously doesn’t sound as good as a normal piano but it works well enough for the game. The fact that the mini piano actually works is impressive on its’ own. Even if the game doesn’t really appeal to you, you can have fun just playing the piano. Playing the piano is actually the best part of the entire game.

With the game being dependent on you being able to play the piano, you might be curious about how you can play the game if you don’t actually know how to play the piano. I have to give Noteability credit since it actually does a good job making the piano pretty easy to play even if you have never played a piano in your life. All of the keys are numbered so to play a song you just need to press the keys as they appear on the cards. Being able to read sheet music is helpful but you don’t need any experience with sheet music to play Noteability.

While Noteability has such an interesting concept, the game just can’t live up to its’ premise.  This is due to several issues with the game.

The biggest problem with Noteability is that it is really hard to play the songs. While the game is easy to play and the cards are not that hard to follow, the problem is with tempo. In order to have the songs sound at all recognizable you have to play them at the right tempo. While the “sheet music” on the cards are pretty easy to follow, without a lot of practice it is hard to read the notes quick enough to play the song without adding pauses not meant to be in the song. Another player and I both had experience playing the piano (quite a few years ago) and yet we still had a hard time playing the notes in rhythm to the song that we were trying to play.

I think the reason it is so hard to keep the right tempo is the fact that you can’t keep your eyes on the card and keys at the same time. While the notes are numbered sequentially, until you play the game quite a bit you are going to have a hard time being able to correctly play keys without looking at the keyboard. I really can’t see anyone becoming proficient with the keyboard until they have at the very minimum played the game a couple times. A game like Noteability should not take several games to learn how to play properly.

Another thing that contributes to it being hard to keep the right tempo is that the piano is not always cooperative. The piano actually works quite a bit better than I was expecting but the piano will not register a note at the worst possible times. This forces you to try and play the key a second time which kills the tempo of the song. This makes it hard to guess what the song is supposed to be. I am guessing this is partially due to the age of the piano but it still affects the game.

The biggest key to having the right tempo for a song is already knowing what the song sounds like. I found it to be quite a bit easier playing a song that I was actually familiar with than a song I had never heard of before. A player that knows most of the songs in the game has a distinct advantage in the game. I knew knowledge of the songs would help with guessing the song titles since Noteability is a trivia game. I was disappointed though that familiarity with the songs is really important when you are trying to play the song.

Basically our experience with Noteability was a complete failure. We actually liked playing the piano quite a bit but the guessing portion of the game was kind of pointless. We ended up never finishing the game. This wasn’t because we didn’t want to but the fact that it would have taken hours to actually score 50 points. At least 80-90% of the songs we couldn’t guess because we either didn’t know the songs or we couldn’t play them with the right tempo. With so many incorrect answers it just wasn’t worth the effort to finish the game. This just sums up my feelings for Noteability: a good idea that was wasted.

If I had to sum up Noteability in a couple words I would say that it is a cool idea that never lived up to its’ potential. The electric piano is really cool even though it has occasional issues. The premise of a trivia game where you guess songs by actually playing them is a pretty cool idea that could have made for a good game. The problem is that Noteability never lives up to this potential. The songs are outdated and obscure to the point that most players won’t know most of them. The biggest problem though is that a lot of the songs don’t sound quite right and it is too hard playing a song in the right tempo that it is recognizable.

If the game’s premise doesn’t really appeal to you I would pass on Noteability. If you are a fan of music though and think the concept is interesting I think the game might be worth picking up if you can get a good deal on it.

If you would like to purchase Noteability you can find it online: Amazon