Here on Geeky Hobbies we have taken a look at quite a few different children’s games. Generally speaking these are one of my least favorite genres as too many games are built solely with children in mind with no consideration for adults playing the game with their children. There are a few games that occasionally break out of the mold though as they may be kind of basic, but they have an interesting mechanic. These usually come from the action or dexterity genres. I can’t say that Chameleon Crunch instilled much confidence, but I was hoping that it would somehow defy the odds. Chameleon Crunch has some elements that are likely to appeal to young children, but it offers nothing for older children and adults.

How to Play Chameleon Crunch 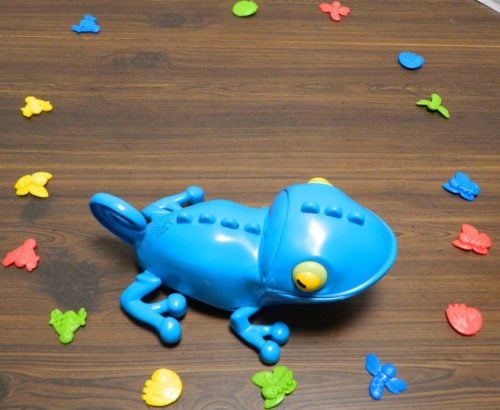 Here is an example of the setup for Chameleon Crunch. In this picture the bugs are placed much closer together than they would be in the actual game in order to fit everything in the picture.

The game is played over a number of rounds. Each round begins with the Chameleon walking around in a counter clockwise circle. While the Chameleon walks the players should search the bugs to find one that either matches their color or bug type. Players cannot pick up any bugs at this point. 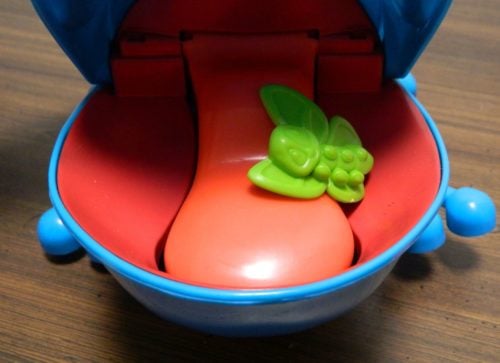 The green player has placed one of their bugs in the chameleon’s mouth.

When the Chameleon opens its mouth some of the bugs already placed in it can come out. When this happens the corresponding player can either choose to add the bug that came out back into the mouth or add a new bug. If a player chooses not to put the escaped bug back into the Chameleon’s mouth it will be moved back into the outer circle.

The game will continue until the Chameleon stops moving. The players will open the mouth and count how many of each player’s bugs are inside. The player with the most of their color/type of bug in the Chameleon’s mouth wins the game. 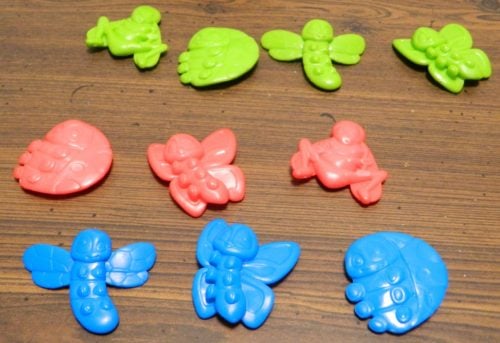 The green player got the most bugs in the chameleon’s mouth so they won the game.

My Thoughts on Chameleon Crunch

I am going to get right to the point. There really wasn’t any reason why I should have enjoyed Chameleon Crunch. The game has a recommended age of 4+ after all. Games with that type of age recommendation are usually pretty bad for anyone outside of young children, but I wanted to check out the game because there are occasionally some children’s games that are more enjoyable than you would expect. These games usually belong to the action or dexterity genres. I didn’t have high expectations, but I was hoping that Chameleon Crunch would surprise me. It unfortunately didn’t.

I will freely admit that Chameleon Crunch was not made for me. Outside of playing the game with your young kids/grandchildren/etc there is no redeeming qualities for anyone over the age of like 4-7. You could honestly make a good argument that Chameleon Crunch isn’t much of a game at all. You basically just sit on the floor (unless you have a very large table) and grab the next bug you need as soon as the chameleon stops moving. Outside of not being able to recognize colors/shapes (young children) you will have no problem picking one up and placing it into the chameleon’s mouth before it closes. As the chameleon opens its mouth around six or so times, the only chance that you won’t be able to place all of them in time is because the chameleon shot out one of your bugs right before the end of the game. Thus most games will end in either a tie or a player losing solely because they got unlucky. Outside of basic color/shape recognition and your ability to reach/move around the floor to grab a bug in time, there is no skill to the game. Thus Chameleon Crunch is a really boring game for anyone that is not a young child.

I thought Chameleon Crunch was a bad game, but that is because it was meant for young children. For young children though I think they could actually enjoy it quite a bit. Lets begin with the game’s simplicity. The game is really simple where it can be taught within a minute or two. An adult may have to first explain the rules to young children, but they should understand the game after that point. This is a good thing because I don’t see many adults actually wanting to play the game. Each game also plays really quickly as I would guess that they only last about 2-3 minutes.

Outside of being easy to play, the game has some educational value as well. This mostly comes from Color Crunch as the players can practice color recognition. In the game players have to quickly scan the bugs on the ground to find one that matches their chosen color. This should help young children identify colors quicker. As for the shapes I think it is a little less useful. It does force players to recognize differences between shapes, but I think it would have been more useful to base the insect shapes off of basic shapes as that would have provided more useful teaching moments.

Finally the main reason that I think Chameleon Crunch would work as a good game for young children is that it is just a silly game. If I had the game when I was a young I probably would have really enjoyed it. The game features a colorful chameleon and bugs. The chameleon actually works better than I expected. Between all of the motion of the chameleon moving/opening its mouth and the various sound effects, I think the game will make young children smile and laugh. There is very little to the actual game, but I think it has the elements that are needed to create a game that young children could enjoy.

Should You Buy Chameleon Crunch?

Chameleon Crunch is basically what you would expect out of a game with a recommended age of 4+. The game is really easy to play and it plays quickly. This is mostly due to there not being much to the game though. Anyone over the age of 6-7 will have no trouble getting all of their bugs into the chameleon in time. Thus most games will end in a tie unless a player gets unlucky and one of their bugs fall out. There is no reason to play the game if you are older than six or seven unless you are playing it with your young children/grandchildren/etc. I could see the game working pretty well with younger children though. The game has some educational value as it could help teach colors and shape recognition. Between the movement and sound effects I could see the game being silly enough that it could really appeal to younger children.

My rating for the game comes from the point of view of anyone older than six or seven. For your children though I would probably raise the rating quite a bit as they are likely to enjoy it quite a bit more. With this in mind I can only recommend Chameleon Crunch to young children (ages four to six or seven) as everyone else is likely to find the game to be pretty boring.If you have younger children and can get a good price on Chameleon Crunch it may be worth picking up.