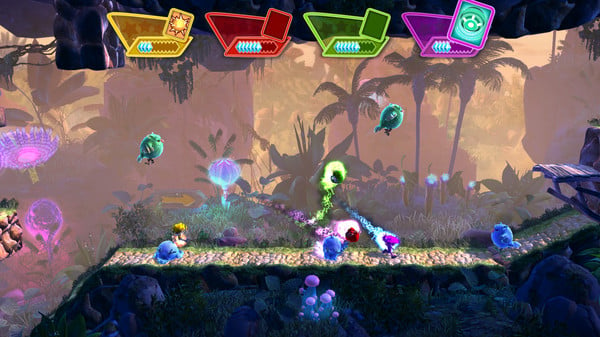 Back in 1987 a video game called The Great Giana Sisters was created for a few video game systems including the Commodore 64. The Great Gianna Sisters was a controversial game because a lot of people think the game was a blatant ripoff of Super Mario Bros. The developers of the original game were even sued for the similarities between the two games. For over 20 years the franchise was abandoned until a DS game was created in 2009 and the franchise was brought back in full in 2012 when Black Forest Games created Giana Sisters: Twisted Dreams. I have played Giana Sisters: Twisted Dreams and its’ “sequel/expansion” Rise of the Owlverlord and enjoyed both games quite a bit.

A New Take On the Series

While at first I found the change to be kind of strange, it makes a lot of sense transforming a platformer into a speedrunning game. Dream Runners ends up playing a lot like Twisted Dreams except the game is now multiplayer and the speed has been increased significantly.

For those of you who have never played a speedrunning game before, the object is to get far enough ahead of the other players that you end up pushing them off the back of the screen. Whoever is the last player remaining on screen is awarded a point and the first player to three points wins the game. If after a certain time two or more players are still in the game, whoever is farthest along the path when time runs out wins the point.

Dream Runners ends up taking a lot from Twisted Dreams and just tweaks it in order to work with the new format of the game. I think the game even uses the same controller layout as Twisted Dreams. Dream Runners includes the universe switching mechanic which has been changed from a button press into running into an orb on screen to switch between universes. The enemies from Twisted Dreams make a return along with many of the obstacles and level designs. The game kind of feels like an alternative game mode for Twisted Dreams.

That doesn’t mean that Dream Runners is a bad game. I actually found the game to be quite good. While you can play the game single player, it works better as a multiplayer experience. As a multiplayer game the game is fun since you should get into some very tight races. On a rare occasion one player will win in a landslide. Most races will either go to the wire or one player will slowly gain enough ground in order to eliminate the other players. A lot of races ended with two players so close that one player was not even one character length ahead of the other player when time ran out.

One of the reasons that the races are so close is that the levels are well designed. Each level does a good job implementing different elements from Twisted Dreams. Each level kind of has a theme/mechanic that it is built around. The levels vary quite a bit and even the difficulty of the levels can vary quite a bit. Some of the levels are on the easy side but are cutthroat because it is much harder to be eliminated so players will be constantly fighting for first place. There are also more complicated levels which include harder platforming areas but are less cutthroat since players are more likely to make a mistake and be eliminated. The levels are well designed in order to give players an opportunity to catch up while also not feeling like the game is purposely letting players catch up.

A new mechanic in Dream Runners are powers ups. Power ups are a good idea since it makes players take riskier routes in order to try and get additional power ups. The power ups are kind of hit and miss though. Some of the power ups I liked quite a bit which includes the ability to spawn some enemies behind you which will slow down the competition without being too powerful. Others like the launcher can be great in some situations but can actually hurt you if used at the wrong time. I found some of the power ups to be a little too powerful though and I still don’t understand what some of them actually do.

Along with power ups, players can collect gems that can be used in order to charge up your boost meter. Players can use collected gems for a temporary speed boost. I like this mechanic since it encourage players to not always take the most direct path in order to collect some gems. The boost forces players to make a decision of when they want to use their boost. If you are in first you may want to use your boost in order to push some of the players off the screen eliminating them. If you are close to losing you may need to use your speed boost just to stay in the game.

As is typical with speedrunning games, Giana Sisters: Dream Runners is a really quick game. In order to stay in the competition speed is key. For the most part the speed in the game is enjoyable. It is fun speeding through levels as you try to leave your competition in the dust. While hitting enemies or other obstacles would kill you in the normal game, they only stun/slow you down in Dream Runners. This temporary setback allows you to focus solely on going as fast as you can. Unless you have memorized a course there is no way that you won’t end up running into a bunch of obstacles.

The speed does present a couple issues though. At times you are moving so fast that it is hard to know what is even going on. This will make you run into a bunch of obstacles that you would have avoided if the game moved a little slower. This issues is magnified if you are in first place since you don’t get to see much of the game world in front of you. When in first you are moving so fast that you pretty much just need to guess what obstacles are going to be coming up in order to try and avoid them. You will usually end up running into them which allows the other players to catch up. I personally wish the game would have let the first player see more of the screen in front of them. I am guessing the game did this in part to create a catch up mechanic for players who had fallen behind.

I Totally Won That

While Giana Sisters: Dream Runners is a good/great game, I did experience some bugs/issues with the game that were kind of frustrating.

Most of these issues came when two players were essentially tied for first place when the timer ran out (this happens quite a bit more than you would expect). I ended up encountering multiple times where it looked like the game made an error in determining who actually won each race. The screen would show that one player had won the race but the game gave the victory to another player. For example in one race I was ahead of one of the computer players but it still gave the victory to the computer player. Other times my screen would show that I was slightly ahead of one of the other players but their screen would show that they were ahead. I don’t know if it is due to lag but these issues are kind of annoying especially when two players are in a tight race.

It was probably hard for the developers to decide on how to handle these situations. I personally wish the time limit was just eliminated and that the only way to win a round would be to push the other players off the screen. Otherwise I think they should have made a round continue (after the time runs out) until one player has a decent lead over another player so this issue would never occur.

Another issue I encountered with the game is that at one point I was considerably ahead of all of the other players and instead of eliminating the other players I was for some reason eliminated from the game because I ended up going off screen while in first. This only occurred once while playing the game so it is probably not a huge issue.

Being pretty much a multiplayer experience it is kind of hard to judge how much gameplay you will get out of the game. The game has no story mode or missions so all you can do is play the different levels with either other players or computer bots.

While my Steam profile says that I haven’t played the game for that long, I see Dream Runners as the type of game that I would play for an hour or so at a time and then come back to it at a later date. The game has nine different levels that are different enough to keep you entertained. I think I could get quite a bit of time out of the game before I get sick of it. How much enjoyment you get out of the game will depend on how much you can play the same levels before you tire of them. If you enjoy speedrunning games I think you should get quite a bit of enjoyment out of the game.

While it is a change from the other games in the Giana Sisters franchise, I enjoyed Dream Runners quite a bit. While the concept of the game may be quite a bit different than Twisted Dreams, the game does share a lot of things with its’ predecessor. The game is very quick and is a really fun multiplayer experience. The levels are well designed and create different experiences which make each one unique to play.

I only had a couple complaints with the game. First when two players are essentially tied when time runs out, the game has the tendency to sometimes pick a player as the winner even if the screen shows another player in first place. The game also sometimes has a problem of moving too quickly making it hard to see what is going on at any particular time. This is especially true for the player in first place who will sometimes have no idea what is coming up since the screen doesn’t pan far enough. This makes the first player run into quite a few obstacles that they didn’t even know were in front of them.