To begin the game place the 11 obstructions on the pink spots on the gameboard. Each player then picks their color and places their pieces in the corresponding color starting area.

Each player rolls the die at the beginning of their turn. A player then moves one of their pieces the number of spaces equal to the number they rolled. Players can use their roll to either remove pieces from their start area or they can move pieces already on the gameboard. When pieces are removed from the start area they start their movement at the space indicated as the start space. Players may not move diagonally or move through the same space twice during their turn.

Players may move through their own or other players’ pieces. If a player lands on the same space as another pawn, they place their pawn on the space and return the other pawn to its’ correct home space.

While moving around the board a player is unable to move through spaces that contain an obstruction. To remove an obstruction a player needs to land on the space by exact count. Once an obstruction is removed, the player that removed it can choose to place it on any unoccupied space on the gameboard except for the first row (the row above the start spaces). 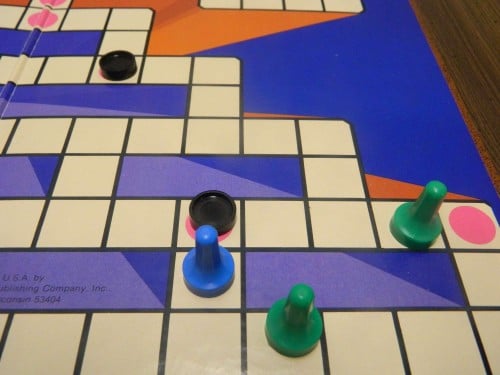 Whoever is first to get one of their pieces to the finish space (by exact count) is the winner.

My experience with Obstruction (also published under the name Barricade) was like a roller coaster. Before playing the game I didn’t have high expectations since it just looked like a generic roll and move game. Generally roll and move games have next to no strategy and rely heavily on luck so I usually don’t really care for them. The only reason why I picked up the game in the first place is because I found it very cheap at a thrift store. After I started playing the game I actually started enjoying it. Then the mid-point of the game came and all of the enthusiasm for the game was gone.

Being a roll and move game I expected the game to be pretty easy to play and I was right. The rules are printed on the cardboard divider and take a couple of minutes at max to read and master. You can probably teach the game to another player in two or three minutes. You essentially roll the dice and move your pieces.

When you begin playing Obstruction you get a strong “Sorry” feel. This is mostly due to being able to send players back to their starting space if you land one of your pieces on another players’ space. It seems like Obstruction took Sorry, replaced the card drawing with a die, and put all of the players on the same board competing to be the first player to reach the finish space. The game also adds barriers that stop a players’ movement until they are removed. With these various additions, Obstruction feels like a more strategic variant on Sorry.

Due to strategic element of placing the obstructions, I was actually enjoying the game quite a bit. It was turning into one of the better roll and move games that I had played since it was simple but also had some strategy. Obstruction had all the makings of an actual good roll and move game. Unfortunately as the mid-game approached, Obstruction’s biggest problem surfaced.

Obstruction’s biggest problem is that it drags on way too long. Obstruction would have been perfect as a half hour game. The game I played ended up lasting close to two hours (three to four times longer than it should have). So why is Obstruction so long? The barriers that added strategy to the game also have a tendency to stall the game. Unless the people playing the game aren’t competitive or have just given up, the game will drag on since whenever a player clears an obstruction they will just place it in front of another player slowing that player down. This process repeats itself over and over again forcing all of the players to roll exact numbers in order to make any progress.

Players can also send you all of the way back to the starting spots so any progress you have made can be easily wiped out. The path back towards the finish line is also not short usually taking five or so turns to get back to the spot where you were when you got sent back. After about the 20th time that this happened (only a slight exaggeration), it really starts to frustrate you. In one instance one player had four pawns near the end and ended up losing three of them before their next turn.

So it is a slow crawl to get near the finish line. You then get to enjoy hitting a brick wall. When you get near the end you start to encounter obstruction after obstruction since everyone starts moving all of the obstructions to the end in order to stop the players who are in the lead. In the game I played it was not unusual to encounter four or more obstructions in a row. This is when the game turns into a competition of who can roll the most ones. Since ones are the only number that can help you advance, whoever ends up rolling the most ones will likely win the game. It got so bad at times that it took close to five minutes for anyone to make any progress towards the finish line.

Obstruction is such a frustrating game. It had the potential to actually be a pretty good roll and move game. Unfortunately the game is bogged down in what seems like a never ending struggle to reach the finish. After a positive start I ended up disappointed with the game.

Before wrapping up the review here are some other short thoughts I had on the game:

Obstruction is an interesting game. The game is fun at times and adds a decent amount of strategy to a simple roll and move game. Up until the midway point I was actually enjoying Obstruction quite a bit. It wasn’t perfect but it was enjoyable. At the midway point though the game really started to drag. The game should have been like a half hour but it turned into an one and a half to a two hour game. Obstruction has a good base of a board game. Unfortunately to fully enjoy the game you will need to make some house rules that may speed the game up a little.