Each player chooses a playing piece and places it on one of the two Quip Start areas. The youngest player gets to be the first guesser and takes the dry erase board and pen.

The player to the left of the current guesser is the reader and is responsible for selecting the next puzzle on the DVD. Each player other than the guesser looks at the next puzzle and tries to think of the funniest, cleverest answer/quip that they can come up with based on the puzzle. Everyone submits their quips to the reader who reads the players’ quips for the round. The reader does not reveal who wrote which quip since it is the guesser’s job to try and guess what each player wrote.

Once the reader has read through all of the quips, they press the timer button on the DVD menu. This gives the guesser 60 seconds to choose who came up with each quip. If the guesser wants to hear the quips again they can do so during this period. When the timer runs out the guesser reveals who they thought said which quip. The guesser moves forward one space for each quip they correctly guessed. If the guesser guesses every one correctly they get an additional space. For every incorrect guess the player who wrote the quip that was guessed wrong gets one space. If the guesser doesn’t get any guesses correct, all of the other players get two spaces. 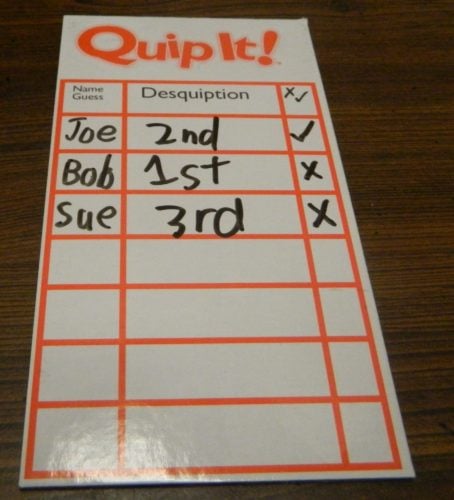 This player correctly guessed Joe’s quip but missed Bob’s and Sue’s. This player gets one space while Bob and Sue also get one space.

While moving if a player lands exactly on a slide space, they slide to the next space. 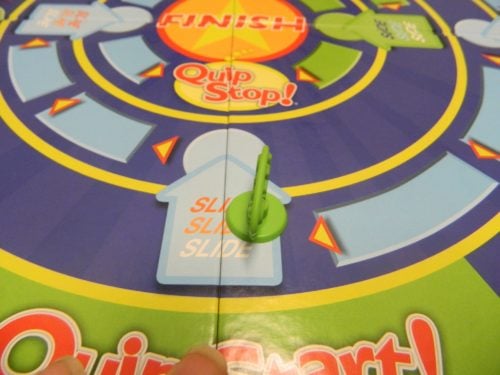 The green player has landed on one of the slide spaces so they get to slide to the next space. 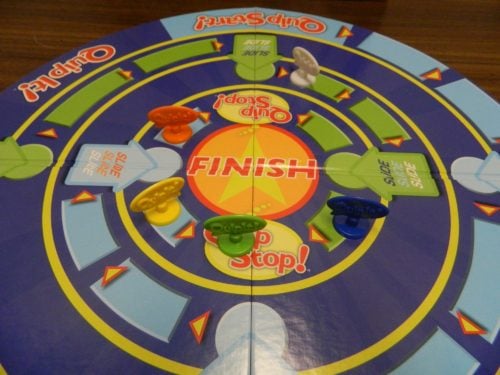 The green player has made it to the Quip Stop space and gets to attempt the final challenge.

For the final challenge, the player attempting the challenge becomes the guesser. Three of the other players write a quip for the next puzzle. The current reader chooses one of the quips and reads it to the guesser. If the guesser picks the right player, they win the game. If they guess incorrectly, they move back one space and the game continues.

In the alternative game there is no guesser. The goal is to write the quip that will get the most votes. Players rotate being the reader. For each round every player writes a quip for the puzzle (including the reader). When everyone has made their quip the reader reads them all (not saying who wrote each one). All of the players besides the reader then vote on which quip they think is best. Players can’t vote for their own quip. The player who gets the most votes gets to move forward three spaces. If there is a tie the reader gets to decide which was their favorite, second favorite and third favorite quip. The reader can pick their own quip. The player who the reader chose as the best gets three spaces, the second best gets two spaces, and third gets one space. Any player who received a vote but wasn’t picked as one of the best three gets a space as well. When a player reaches the Quip Stop space, the same process as in the original game is followed.

Back in the early 2000s the DVD board game genre was quite popular. Games like Scene It were huge with many franchises having their own Scene It game. While games like Scene It were really popular there were plenty of DVD games that were failures. Screenlife, the creators of Scene It, weren’t even immune since Quip It! was one of their board game bombs that never got a sequel. So what went wrong? In my opinion Quip It! had a lot of potential but failed in its’ execution.

Basically Quip It! is what you would get if you combined a DVD game like Scene It with a party game like Apples to Apples or Balderdash. The game presents weird pictures, sayings, and even movie clips and players need to come up with funny sayings/captions to go with the image/clip presented. I like Scene It and Apples to Apples so I think Quip It! is a great idea for a game and in some ways is a good game.

I think the different puzzles/games included on the DVD are pretty good ideas. The game presents some interesting new ideas for the Apples to Apples genre. While the puzzles are similar to what you would expect from these type of games, Quip It! does a good job presenting them differently than most games in the genre. Quip It! is more of an experience than a game though since you play the game more to just have fun than try to win the game. If you like these type of lighthearted games there are things to like about Quip It!

The problem is that while the puzzles/games are fun, the actual content for the different puzzles could have used some work. The game could have chosen better prompts and pictures for the different puzzles. Most of the puzzles are either too specific or too broad which gives you either no idea or too many options of what to write. A lot of the pictures are gauged toward adult humor so that will turn off some people. The video clips don’t come up nearly enough which is disappointing since they are the one unique thing that using a DVD could have given to the game. While you will encounter the occasional good puzzle, you will run into just as many bad puzzles.

The poor execution includes the DVD itself. For some reason the game has way too long of transitions between the different puzzles. Some of the transitions are 20-30 seconds which could have easily been just a couple seconds. You end up wasting a bunch of time just waiting for the next puzzle to load. Add to that the annoying background music that loops constantly and you will want to mute your TV when you aren’t doing a clip puzzle. With the lack of video clips I question whether the DVD was really even necessary since most of the puzzles could have been printed on cards.

I also found the gameboard to be pretty pointless. For some unexplained reason the gameboard has two tracks and I still don’t know why since they are the same length and serve no purpose. This feels like an example of a board game that for some reason wanted to add a gameboard even if it didn’t really add anything to the actual game. Quip It’s components are actually pretty good quality wise but a lot of the components don’t serve much of a purpose since the game probably would have been better by just keeping score on a sheet of paper.

The final complaint I have with the game is that it is a game that shows that the basic rules are not always the best way to play a game. After reading the rules I immediately knew that the main game was the inferior way of playing Quip It! For most games I will try out the main game before trying alternate rules but in the case of Quip It! I immediately went to the alternate rules. The alternate rules pretty much play like your typical Apples to Apples style game and the game works best that way. I just don’t know why anyone would want to play the game where players try to guess what the other players wrote.

Quip It! is not a terrible game but it also feels like a wasted opportunity. I think Quip It! had the potential to be a good party game like Apples to Apples and other similar games. The game has some interesting puzzles/games that could have been quite fun/funny with the right execution. While I had fun with the game, the puzzles could have been much better.

If you don’t like these types of party games, you will probably hate Quip It! While Quip It! could have been much better, it is not a bad game. If you like these type of games and can find it for cheap, Quip It! is probably worth picking up.

If you would like to purchase Quip It! you can purchase it on Amazon here

The Invention Game Board Game Review and Rules
Click here to cancel reply.