On an average day if I saw a game like Codebreaker I probably wouldn’t even give it a second thought. Just looking at the box, Codebreaker looks like another average children’s memory game. Having no prior knowledge of the Cogno franchise didn’t help things. The only reasons why I even bothered picking up Codebreaker in the thrift store was that it was really cheap and I noticed an interesting mechanic in the description of the game. The idea of mixing a memory game with a clue mechanic sounded quite interesting. After playing Codebreaker the clue mechanic did not disappoint but the rest of the game is just not very good.

How to Play Codebreaker

Shuffle all of the tiles and place them face down in a 6 x 6 grid. Each player takes a dry erase marker and a rocket ship piece (if you are using the advanced rules). The youngest player starts the game.

On a player’s turn they will flip over two tiles. The first tile they flip over is seen by all of the players. The second tile is only seen by the current player. If the two tiles match the player takes both tiles and gets to pick two more tiles. If a player gets three pairs in one turn, they can steal a pair of tiles from another player. 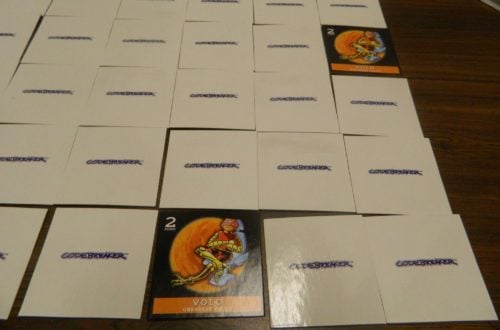 This player found two matching tiles. They take both tiles and then get to flip over two more tiles.

If the two tiles don’t match the current player will use their dry erase marker to write a clue on the back of the card that they looked at by themselves. The player to the right of the current player will write a clue on the tile that everyone got to see. When writing a clue the player can write whatever they want but they probably want to create an obscure clue that only they can figure out. After putting a clue on both cards, play passes to the next player clockwise. 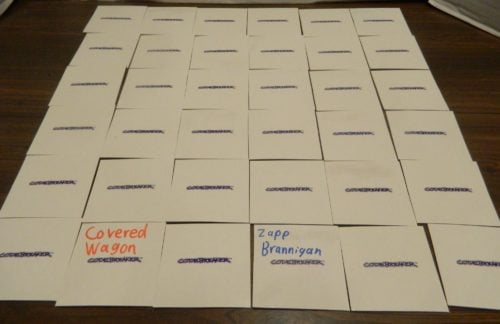 This player flipped over two tiles and they didn’t match. Clues are written on the back of both tiles and play passes to the next player.

If during their turn a player flips over one of the gear tiles, they take the gear tile and it doesn’t count as one of the two tiles drawn for their turn. During a future turn the player can use the gear to perform a special action. The x-ray goggles allow you to look at one tile and it doesn’t count as one of your tiles taken as long as you don’t write down a clue for the tile. The truthbot gear forces a player to explain their clue for one of the tiles and everyone gets to see the other side of the tile. Once a gear has been used it is discarded.

The main mechanics of the game remain the same in the advanced version of Codebreaker. The advanced rules use the planet tile though and each player gets a rocket. At the beginning of the game the players choose which side of the planet tile they will place face up. In order to claim a pair of tiles in the advanced game the two tiles have to match and the creature’s planet has to match the side of the planet that is currently face up. If either condition is not met the player can’t take the pair of tiles. The pair whose planet is both orange and blue can be claimed at any time.

The game ends when all of the tiles have been claimed. Since the instructions don’t actually explain who wins I am assuming the winner is either the player who collects the most pairs or scores the most points from the pairs that they have collected.

My Thoughts on Codebreaker

As I already mentioned the one thing that intrigued me about Codebreaker was the clue mechanic. The reason that I found the mechanic to be so interesting was that I have never seen a memory game that allows you to write down clues to help you find matches later in the game. I honestly don’t know why I have never heard of a memory game using this type of mechanic before because it makes so much sense. While it doesn’t fix all of the problems with Codebreaker, the clue mechanic is easily the most interesting part of the game.

The reason that I found the clue mechanic to be so interesting was that it adds a unique element to the game that I haven’t seen in any other memory games. While you could create any clue you want, to get the most out of the mechanic you need to create clues that are both helpful and yet obscure enough that the other players don’t know what you are talking about. If you write a good clue for a card you will have no trouble remembering what that card is for the rest of the game. You have to be clever when coming up with clues though since if they are too obvious the other players can use your clues to find pairs for themselves.  Clever use of in-jokes, pop culture references, and wordplay can lead to really good clues. For example some of the clues we used in the game included Zapp Brannigan and Igor the Great (an eye creature that looked like a wizard).

The clue mechanic is so interesting for a memory game that I think it could make a really good game. The problem with Codebreaker though is that there is very little to the rest of the game. It is too bad that I don’t know of any other memory games that have used a similar mechanic. If you are aware of any memory games with a similar mechanic I would love to hear about them in the comments.

Once you get past the clue mechanic, Codebreaker plays like pretty much every other memory game. You flip over tiles hoping to find two tiles that match. Whichever player find the most pairs wins the game. If you have played any memory games before you already know what you are going to get out of the rest of the game. I don’t hate memory games but I would not classify them as one of my favorite genres either. While the clue mechanic adds a little strategy, there is just nothing else that makes Codebreaker any more interesting than any other memory game.

Like a surprising number of memory games, Codebreaker relies quite a bit on luck. The luck comes into play in a couple different ways. First like almost every memory game, towards the end of the game one player will likely find most if not all of the remaining pairs. Due to there not being a lot of tiles left you don’t have to remember many tiles and with less pairs it is just easier to guess a pair. I don’t see it being that hard for a player to find three or more pairs in one turn towards the end of the game. Therefore your success in the game is likely going to come down to whether you are the first player that gets to take a turn when the game reaches this point.

The other area where luck plays a role is that all of the cards are not worth the same number of points. While the game never actually specifies how you win Codebreaker, I would assume the player who gets the most points from their cards wins the game. The problem with this is that not all of the pairs are worth the same number of points. This makes no sense because no pair is harder to find than any other pair. I don’t see why a player should win the game because they found pairs worth more than the pairs another player found. I would highly recommend just playing where the player who gets the most pairs wins.

The final issue I had with Codebreaker was the planet mechanic. I can see what the game was trying to do with this mechanic since it stops you from claiming every pair as soon as you find them. The problem is that it tends to add even more luck to the game. There were several times in the game that I knew the locations of a pair but were unable to claim them because the matching side of the planet tile was not face up. This lead to players being able to claim a pair that players before them would have been able to claim except for the limit due to the current planet. I personally would recommend ditching the planet rule when playing Codebreaker.

As far as the components they aren’t terrible but I wouldn’t consider them to be great either. I like that the back of the cards can be directly written on. The clue mechanic would have been kind of a pain it that wasn’t the case. The tiles are of a solid thickness. The artwork on the tiles could use a lot of work though. The game has a decent amount of tiles but with only 17 pairs you can go through all of the tiles pretty quickly. I think the game would have been better with more tiles since the clue mechanic would have played a bigger role in the game. The dry erase markers could have been better as well since the green pen was dried up even though the game had never been played.

Should You Buy Codebreaker?

Codebreaker is a good example of a game having to be more than just one mechanic. I actually really liked the mechanic where you could write clues on the back of the cards after you looked at them. This adds a decent amount of strategy to the game as you don’t have to rely solely on memory and can gain an advantage with clever clues. The problem is that there is nothing else to the game. The game plays like every other memory game. There is a high reliance on luck, it is unfair stealing pairs from other players, and the planet mechanic is just unfair at times.

With Codebreaker not being much different from your typical memory game, if you don’t really care for the genre I don’t really see you enjoying Codebreaker either. If you like memory games you may get some enjoyment out of the game. The game will probably be more enjoyable with children though. I would only recommend picking up Codebreaker if you can get a good deal on it since it does have some issues.

If you would like to purchase Codebreaker you can find it online: Amazon