Recently on Geeky Hobbies we have been taking a look at the Benji series of movies (Benji, For the Love of Benji, Benji’s Very Own Christmas Story, and Benji: Off the Leash!). First created in 1974, the character of Benji has starred in quite a few movies and other forms of media throughout the years. In the late 1970s and early 1980s Benji was particularly popular which lead to quite a bit of merchandise being made to capitalize on the popularity of the character. As we enjoyed the Benji series of movies, we decided to check out one of the two Benji board games, Benji’s Detective Game. While I like the character of Benji, the Benji Detective Game is a very basic roll and move game made to cash in on the character’s popularity.

How to Play Benji Detective Game

At the beginning of a player’s turn they can either stay on their current space (if they are on a bone space) or they will roll the die. When rolling the die, the player will move their pawn the number of spaces rolled. A pawn can be moved in any direction. 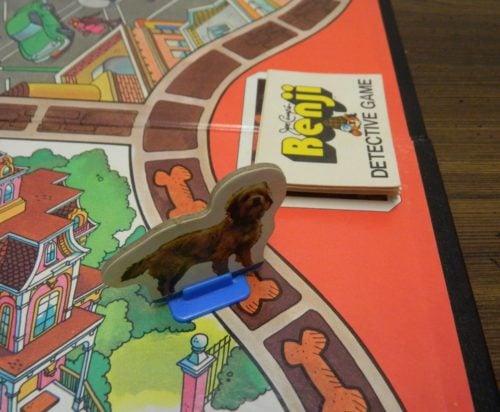 This player ended their turn on a bone space so they will draw a card.

When a player draws a Benji card they will look at it themselves without showing the other players. Depending on what card is drawn, one of two things will happen:

In addition to normal bone spaces, there are a couple special spaces that a player can land on:

After a player has finished their turn, play passes to the next player clockwise.

The game ends immediately once one of the players have found all five cards that match the pictures on their clue card. This player has won the game. 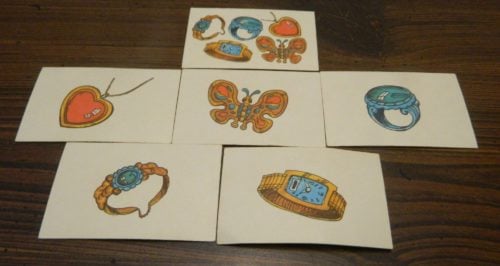 My Thoughts on Benji Detective Game

I can’t say that I was surprised that the Benji Detective Game is not a particularly good game. Going in I knew there was a very good chance that it was going to be another very generic roll and move game that added the Benji theme in order to appeal to fans of the character. Unfortunately my initial impression was pretty much spot on. The Benji Detective Game is the very definition of a generic roll and move game. This formula is so widespread among licensed games that The Jetsons Game, which we played a while back, is basically the exact same game outside of a different theme and a couple slight tweaks.

At its core the Benji Detective Game is exactly what you would expect out of a roll and move game. You roll the die and move around the game board. The ultimate goal is to try and find all of the cards that match your clue card. This adds some luck and memory to the game as you try to figure out where the cards you need are hidden.

As the game was designed for children (recommended ages 6-12), it should come as no surprise that the game doesn’t have much strategy. For most of the game you are just rolling a die and drawing cards. Therefore the game relies on a lot of luck. Players that roll well and are lucky enough to draw the cards they need will win the game. Having a good memory of where you and other players have placed cards can give you a slight advantage. You can use this information as a guide to which piles you should search. It rarely is going to play a big role in the game though as luck is likely going to decide who wins most games.

The only area where a slight amount of strategy enters the game is when choosing which piles to place cards that aren’t yours. Most of the time the strategy is pretty obvious. You should usually place another player’s card in one of the piles furthest away from their current location. If you always do this though players are going to get a little suspicious and just head to that pile as quickly as possible. You will eventually have to bluff the other players which includes placing a card that a player needs in the pile closest to them. It can be somewhat satisfying tricking another player in this way but it is not going to last for long.

This loses some of its effectiveness though as the Benji Detective Game allows players to stay on bone spaces instead of moving. This allows a player to search through all of the cards in a pile. In some ways I like this, and in other ways it takes something away from the game. On the positive side, being able to stay on the same space and continue to search a pile makes it much easier to find your cards. There really is no reason to leave a pile until you have either exhausted a pile or you know what cards are still in the pile. As you don’t have to worry about moving around the board so much, it makes the game move along quicker. I would say most games should only take 15-20 minutes. I can’t imagine how long the game would have taken if you couldn’t stay on bone spaces.

On the negative side, this decision takes away from the little strategy that the game had. There really is no point in leaving a bone space until you know that none of the remaining cards in the pile are yours. When you do have to move, you want to try to land on another player’s space as this can be quite beneficial. It allows you to move to any bone space on the board. This lets you look at the top card from any pile on the board. If you can land on a bone space that has a player on it, it gets even better as you can look at two cards. This mechanic could have lead to some strategy as players tried to land on each other’s spaces. There is little need for this in the game though as you spend a lot of your turns staying on bone spaces and looking at cards.

The component quality for the Benji Detective Game is what you would expect from a 1979 Milton Bradley board game based on a franchise. Outside of the die, all of the components are made out of cardboard. The quality of the cardboard pieces is pretty standard. The game pieces feature a cute picture of Benji but all four pieces look the same except for the base. The artwork is not bad. The game board has some cute cartoony artwork showing different parts of town. Basically the components are nothing special, but are not bad either.

Should You Buy Benji Detective Game?

At the end of the day the Benji Detective Game is not a good game. It is a very basic roll and move game. You roll the die and move around the game board trying to collect all of your cards. The first to do so wins the game. The game was meant for children so it is not surprising that the game relies on a lot of luck and has very little strategy. Good memory can help you a little as it can narrow down which piles you should search. Your success is most likely going to come down to how well you roll and guess where your cards are located on the board. There is a little strategy in figuring out where to place the other player’s cards, but it ultimately comes down to who guesses better. All of this leads to the Benji Detective Game being kind of boring.

Basically I don’t see the Benji Detective Game being for most people. I can only see two groups of people being interested in the game. If you have young children who like Benji/dogs, they could have some fun with the game. Also if you really like Benji you may get some enjoyment out of the game, even if most of it will come from the theme instead of the actual gameplay. If you are in either group it may be worth picking up the game if you can get a good deal on it. Otherwise I would pass on the Benji Detective Game.

If you would like to purchase Benji Detective Game you can find it online: Amazon