From the 1950s to the 1980s The Schaper Company was pretty well known for making plastic toys and board games. While the brand is now owned by Mattel, Schaper was responsible for creating several popular board games that are still known to this day. These games include Ants in the Pants, Cootie, Don’t Break the Ice, Don’t Spill the Beans and Stadium Checkers. The Schaper Company was responsible for quite a few popular children’s games but a lot of their games never seemed to really catch on. Today I am looking at one of those games Bango! Bango! which was released in 1965. I can’t say that I had high expectations for the game especially since there had to be some reason it never caught on. I was a little curious though as Bango! Bango! had a concept that I really hadn’t seen in any other games before. Bango! Bango! is unlike any other games that I have ever played and can be fun in short doses but it gets repetitive rather quickly.

How to Play Bango! Bango!

Bango! Bango! is a free for all game where the players play at the same time and don’t take turns. The players use the end of their stick to press the ball furthest to the right onto the inside ramp. Players will then tap on the right side of the gameboard with their Bango stick to try and push their marbles far enough so they enter the inside ramp. 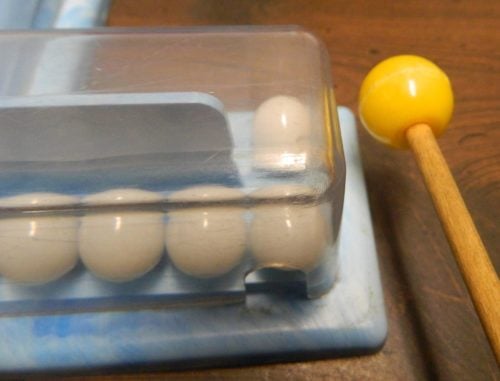 Once a player gets a marble in the inner ramp, they will position the next marble and try to get that marble into the inside ramp.

The game ends when one of the players get all six of their marbles into the inside ramp which should point the center arrow towards them. This player has won the game. 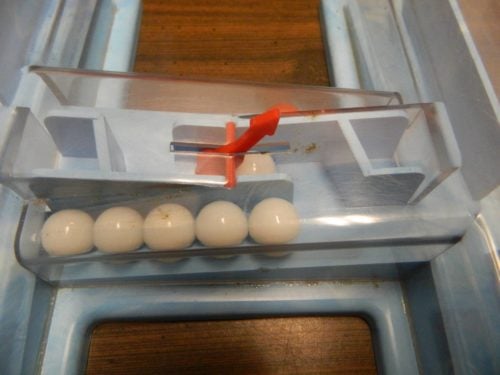 The white player has gotten all of their marbles into the inner ramp so they have won the game.

My Thoughts on Bango! Bango!

The premise behind Bango! Bango! is really simple. Each player controls half of the gameboard which has six marbles in it. Each player is given a mallet which they need to use to get their six marbles to the inside ramp. As the marbles are encased inside the plastic gameboard, this is accomplished by hitting the sides of the gameboard with your mallet. You need to be careful though as you have to provide just the right amount of force when hitting the side of the gameboard. Hit too hard and the marble will roll past the inside ramp and back to the start. Hit too light and the marble will also roll back to the start.

Bango! Bango! is one of those games that are better experienced than described. I think the best way to describe Bango! Bango! is to say that it is a short dexterity skill game. Basically the game tests whether you can consistently hit the gameboard with the right amount of power. The player who is best at that will win the game. As this is all there is to the game, it is not surprising that the game is really simple and thus easy to play. The game originally had no age recommendation and outside of the potential choking hazard from the Bango sticks I agree with that assessment. This is a game that literally anyone can play as you don’t have to hit the gameboard with that much force in order get the marbles to roll into the inside ramp.

Generally I have mixed feelings about games that are so simple. Some of them can be fun to play but they get repetitive pretty quickly. I first thought I wouldn’t really like Bango! Bango! because it looks kind of silly. I will say that I had more fun with the game than I was expecting though. Bango! Bango! is one of those type of games that are fun to play but you can’t really explain why. It is far from a revolutionary gaming experience but I had some fun playing the game. I have played around 700 different board games and Bango! Bango! is unlike any other board game that I have ever played. There is just something satisfying about hitting the side of the gameboard with the right amount of force to get the ball to enter the inside ramp.

The problem is that while I had some fun with the game, that fun subsided pretty quickly. I attribute this mostly to the fact that the game is so simple. There is only so many times you can hit the side of the gameboard without the whole experience becoming repetitive. After about 10-15 minutes I got sick of playing the game. This is pretty typical of games with only one real mechanic and I think it is even more prevalent with Bango! Bango!. It is one of those games that you might bring out of the closet occasionally to play for a little while before you put it away for another day.

In addition to getting repetitive rather quickly, there are some issues with the game itself. Since the gameplay mainly involves hitting the side of the gameboard with a mallet, it is not surprising that the components can wear out quite a bit over time. My copy of the game for example is cracked on one of the sides where you hit it with the Bango sticks. That is to be expected from a game from 1965 that involved players hitting it repeatedly. I can’t really judge the game that harshly that it shows signs of wear 50 years after it was first released. If you are looking for a copy of the game though you need to make sure you find a copy in good enough shape that it will still work as intended.

This issue may have to deal with wear over time but at least with my copy of the game marbles seemed to regularly get stuck when players shot too short or far. This resulted in players having to figure out some way to get to balls to roll back to the starting position. In most cases the players had to keep hitting the gameboard until they were able to finally get the ball moving. If this happened occasionally it would have been annoying but manageable. The problem is that it seemed to happen over and over again. At times players were spending just as much time trying to get their marbles back to the start as they were shooting the marbles in the first place. This could give a player a significant disadvantage in the game and after a while just gets quite frustrating.

I also had a small issue with Bango! Bango! being a pretty loud game. While the game never gets to the noise levels of a game like Hungry Hungry Hippos, the game can get quite loud at times. I guess that is to be expected from a game that has you hitting the sides with a plastic mallet though. The game is by far the loudest when a player is furiously trying to get one of their marbles to return to the start. The normal gameplay can also get quite loud though. I don’t think the noise is a reason not to play the game but I know it will annoy people that don’t like loud games.

Should You Buy Bango! Bango!?

At the end of the day there are a few things I liked about Bango! Bango! but it is still not a great game. Bango! Bango! deserves some credit for originality as I have played almost 700 different board games and yet have never played anything quite like it. The game is really accessible as it really only has one mechanic. While the gameplay is really simple, I actually had more fun with the game than I was expecting. The biggest problem with Bango! Bango! though is that the fun doesn’t last that long. After about 10-15 minutes you are going to want to put the game away for another day. Bango! Bango! also has a problem with marbles regularly getting stuck and not returning to the start when you miss which forces players to spend almost as much time getting the marbles unstuck as they do playing the game. Finally Bango! Bango! is going to annoy people that don’t like loud games.

Unless the game’s concept really interests you or you have fond memories of the game from your childhood, I don’t really see a reason to pick it up. If Bango! Bango! sounds like fun I am guessing you will enjoy the game but will put it away after around 15 minutes to play another day. This is the main reason why I would only recommend the game if you can find it for cheap and you have extra storage space as it will be one of those games that you only bring out occasionally.

If you would like to purchase Bango! Bango! you can find it online: eBay