Schaper Manufacturing Company was a board game manufacturer from the 1940s to the 1980s. While the company was most famous for being the original creator of Cootie, one of their other popular board games was the game Stadium Checkers. Over the years Stadium Checkers has been somewhat forgotten due to not being manufactured between the 1970s and 2004 when the game was renamed Roller Bowl. Being a family game from the 1950s I didn’t have high expectations for the game. While it is not a great game, I will admit that Stadium Checkers was better than I was expecting.

Each player chooses a color and takes five marbles of that color. The players place one marble in each spot on the outer ring on their side of the gameboard.

On a player’s turn they are able to turn one of the rings. Before the player starts turning a ring they have to tell the other players what their move is going to be. The player can basically make one of two moves. They can either move one of their marbles to a pocket or move a pocket to one of their marbles. After the marble falls to the next ring, the player’s turn immediately ends and they can’t turn the ring anymore. While turning a ring the player has to turn it slow enough that all marbles that are supposed to fall are given the opportunity to do so. 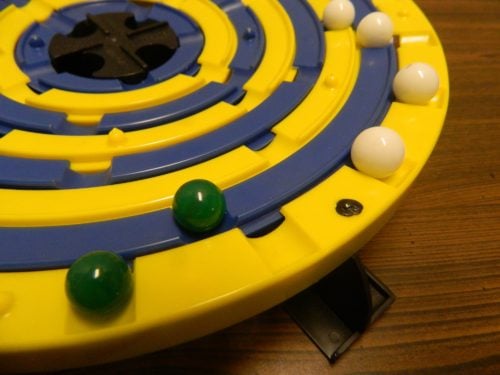 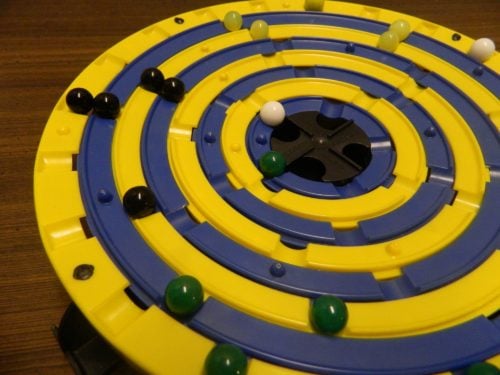 The first player to get all five of their marbles into their own hole in the center of the board wins the game. 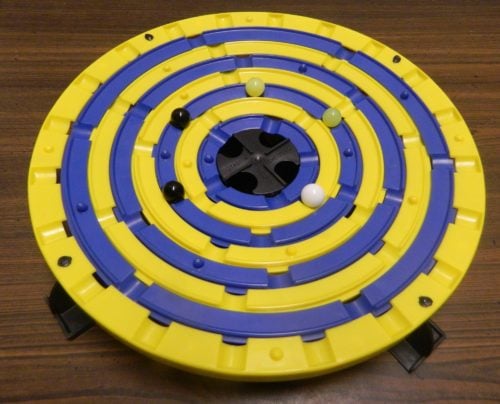 When you first look at Stadium Checkers you don’t see a lot of strategy in the game. It just looks like a game where you spin the rings dropping marbles until someone eventually wins the game. It turns out that there is actually quite a bit more strategy to the game than that though. You might think that the game has a lot of luck but it doesn’t have as much as you would think as long as you plan out your moves. While players can have quite a bit of impact on other players, the player with the best strategy has a pretty big advantage in the game.

Basically I look at Stadium Checkers as an abstract/spatial strategy game. In order to do well in Stadium Checkers you really need to pay attention to the layout of the board. Basically you need to try and make at least two of your marbles drop one ring every turn. Instead of just turning a ring you should look to see how you can turn the ring to have multiple of your marbles fall during your turn. If you instead just focus on one marble, you can fall behind quickly.

With all of this talk of strategy you might think that Stadium Checkers is a somewhat challenging game? While the game has the possibility for a surprising amount of strategy, it is far from a difficult game. Basically you just turn a ring and your turn is over. The game is simple enough that young children should be able to play the game. Stadium Checkers is one of those games where you can just play and see who wins or the players could be really competitive and put a lot of thought into their moves.

I think one of Stadium Checker’s greatest strengths is that the game seems to create a very close ending. In the game I played two players got out to an early lead but the other players starting catching up by the end of the game. Speaking of the end of the game, it couldn’t have been any closer. One player ended up winning the game by a fraction of an inch as the player who ended up in second had their marble sitting on the edge of their goal when the other player won. I love when board games create close endings and I believe that Stadium Checkers will regularly lead to very close endings.

Another problem with Stadium Checkers is the fact that there is a kingmaker issue in the game. Since players can have a pretty big impact on other players in the game, a player that can’t win the game themselves will likely decide the ultimate winner of the game. This will definitely be the case if you play using the rule where you can move any ring even if it doesn’t impact one of your marbles. This is why I would recommend using the rule where you have to move a ring that will move one of your marbles. Otherwise you could just keep using your turn to mess with the other players. I have never liked when board games allow one player to ultimately decide who is going to win the game. I think a player should win based on their own choices.

Overall the components for Stadium Checkers are very average. The gameboard is dull and made of cheap plastic. The biggest problem with the gameboard is the fact that marbles tend to get stuck from time to time and need a little nudge in order to fall to the next ring. A lot of these problems can be attributed to the game’s age though and for a game its’ age some of these problems can be forgiven.

With it being a family game from the 1950s I didn’t have high expectations for Stadium Checkers. I thought it was going to be another family game that relied quite a bit on luck while having next to no strategy. I was pleasantly surprised that the game actually has a lot more strategy than I was expecting. While players have a lot of impact on the other players’ fates, a good strategy is important to winning the game. Stadium Checkers is one of those games where you can put as much strategy/thought as you want into it. Stadium Checker’s two biggest problems is that one player will regularly get to play kingmaker and that the game is just kind of boring.

I am not exactly sure what you are asking.

If this was not what you were asking I apologize. If you can further clarify your question I will try to help as much as I can.