How to Play Hungry Hungry Hippos

Each player chooses a hippo and places five marbles in the release area next to their hippo. The players choose which player will start the game.

The first player presses the lever to launch one of their balls into the play field. All of the players will then press the lever on their hippo in order to move their hippo to try and capture the ball. 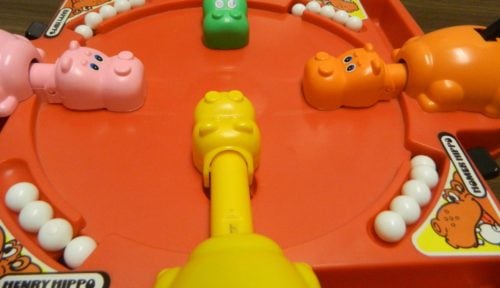 The game ends after all of the balls have been captured by a hippo. Each player counts up how many marbles they collected. The player who collected the most marbles wins the game. 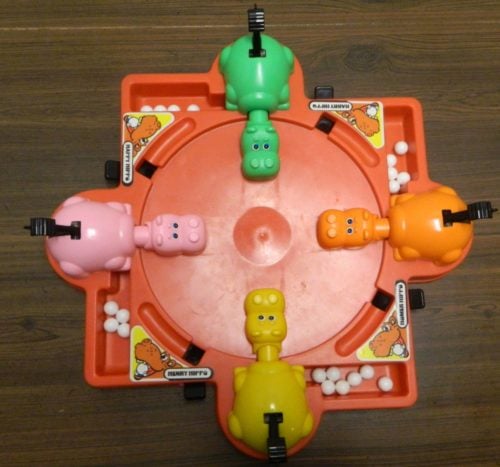 The yellow player has grabbed the most marbles so they win the game.

Another way to play Hungry Hungry Hippos is to have all of the players release all of their marbles at the same time. Players will then frantically try to capture as many balls as they can. Whichever player captures the most marbles wins the game.

My Thoughts on Hungry Hungry Hippos

Unless the rules have changed recently, the actual main rules for Hungry Hungry Hippos have players only releasing one ball into the play field at a time. I am guessing a lot of people probably don’t think that this makes that big of difference as it doesn’t drastically change the gameplay. As most players’ strategy involves just hitting the lever as much as possible, only playing one ball at a time wouldn’t make that much of a difference. At first this strategy makes sense as the more times you hit the lever the more chances you should have to grab a ball. Using the main rules though I don’t think hitting the lever as quickly as possible is a good strategy.

So the biggest complaint most people have with Hungry Hungry Hippos is that they think the game relies entirely on luck and how fast you can hit your lever. Based on my experience though there is actually more strategy to Hungry Hungry Hippos than it gets credit for. Now the game still doesn’t have much strategy but there is more to it than just hitting the hippo lever as quickly as possible. The key to the normal version of Hungry Hungry Hippos is timing. While you might get some marbles hitting the lever as quickly as possible, you are more likely to just hit the ball towards one of the other players. Instead of going as fast as you can, you are better off timing your hippo for it to close its’ mouth when the ball is in range.

A lot of people are probably going to be skeptical of this fact since it makes sense to think it is best to just go as fast as possible. I will say that the results speak for themselves though. While the three other players went as quickly as they could I decided to take my time and only move my hippo when the ball was in position to be captured. Using my strategy I have to say I probably captured 75-80% of the balls. At first we thought maybe it was because my hippo was working better but the same results occurred with all of the hippos. I would say being able to time it correctly actually gives you a big advantage in the normal version of Hungry Hungry Hippos. While the game still relies heavily on luck, this shows that there is still some skill in Hungry Hungry Hippos.

While the free for all mode is more exciting, it is also responsible for a lot of the complaints that people have with Hungry Hungry Hippos. While I think the normal mode has some skill involved, the free for all requires very little skill. While timing is key when only one ball is played at a time, the key for the free for all is just pressing the lever as quickly as possible. Basically the outcome of this mode comes down to who can press their lever the fastest and who gets the luckiest. While this mode is fun there really isn’t much to it outside of luck.

As far as which mode of Hungry Hungry Hippos is better, it is actually kind of hard to decide. The normal mode has quite a bit more skill involved as it doesn’t just rely on who presses the lever the quickest. The normal mode is fun but it just doesn’t live up to the excitement of the free for all mode. The free for all mode epitomizes what most people expect out of Hungry Hungry Hippos, crazy chaotic fun.

Other than the reliance on luck I would say that the biggest problem with Hungry Hungry Hippos is the fact that the game gets repetitive pretty quickly. While the game can be surprisingly fun at times, you can get sick of the game pretty quickly as you are just doing the same thing over and over again. Since most games will only take a couple minutes, I can only see playing a couple of games before the game starts to feel repetitive. Hungry Hungry Hippos is just one of those type of games that work well for 10-15 minutes and then you want to put it away for another day.

Should You Buy Hungry Hungry Hippos?

Hungry Hungry Hippos was clearly designed for small children and their parents as the game is really simple and quick to play. With adults though the game has developed a reputation that it relies entirely on luck and who can press the lever the fastest. While this is true for the free for all game, there is actually a decent amount of skill if you use the rules where only one ball is put into play at a time. Under these rules there is actually a pretty high reliance on timing. Hungry Hungry Hippos is far from a great game but it is a game that both children and adults can enjoy. I wouldn’t recommend playing it for more that 15 or so minutes at a time though as it gets a little repetitive and the noise will probably drive you nuts.

If you don’t have children or hate children’s dexterity games, you will probably despise Hungry Hungry Hippos. If you have young children I think they will love the game. As far as adults are concerned I think you can get some enjoyment out of the game if you like these type of games and don’t mind only playing the game for around 15 minutes at a time. If you can get a good deal on Hungry Hungry Hippos I think it is worth picking up for some people.

If you would like to purchase Hungry Hungry Hippos you can find it online: Amazon