I have looked at a surprising amount of stacking games in the past here on Geeky Hobbies. In general I don’t have anything against the mechanic but I wouldn’t classify it as one of my favorite genres either. The stacking mechanic is solid but too many games from the genre fail to do anything new outside of changing the shape of the objects that you are stacking. With the lack of originality few stacking games really stand out. Today I am going to look at one of the more popular stacking games, Bandu, which is ranked as one of the top 1,000 games of all time on Board Game Geek. With the high ranking I had higher expectations than I normally would have for a stacking game. While Bandu stands out in the stacking genre and is probably one of the best stacking games that I have played, it still has its own issues.

How to Play Bandu

Each player takes a base block and five bidding beans. All of the base blocks that are not used are put back into the box. All of the other pieces are placed into the center of the table. Choose a player to start the game. 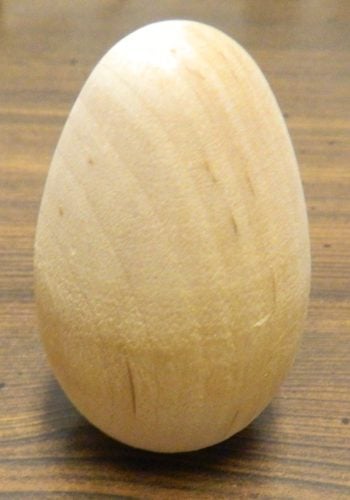 In a “to refuse” auction players will have to pay beans in order to avoid adding this piece to their structure.

In a “to bid” auction the auctioneer passes the piece to the player on their left. If this player would like to place the piece in their structure, they have to bid beans. A player has to either raise the bid or drop out of the bidding. When all but one player has passed, the player who bid most pays the amount of beans that they bid. All other players that had bid in the round get to take their bids back. If no one bids the auctioneer has to place the piece into their structure without paying any beans. 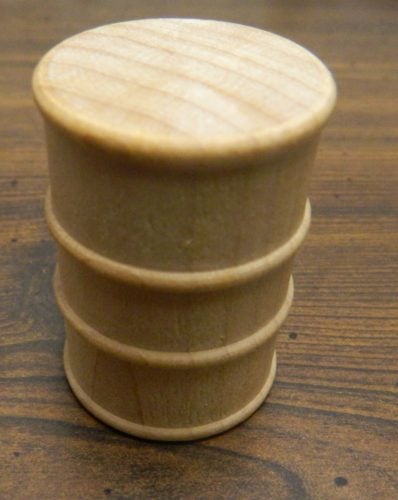 If this piece was placed in a to bid auction players would have to bid beans in order to add the piece to their structure.

When placing pieces there are a couple rules that you need to follow: 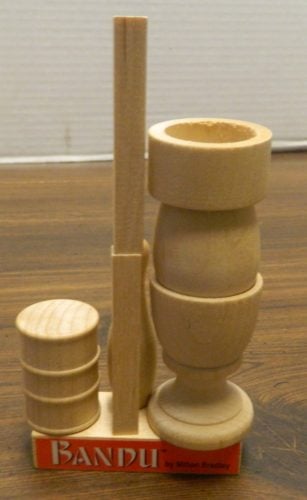 If at any time a player’s tower falls, they are eliminated from the game. All of the players’ blocks (other than their starting block) are put back into the center of the table. If a tower falls due to another player’s action, the player is able to rebuild their tower and stay in the game. 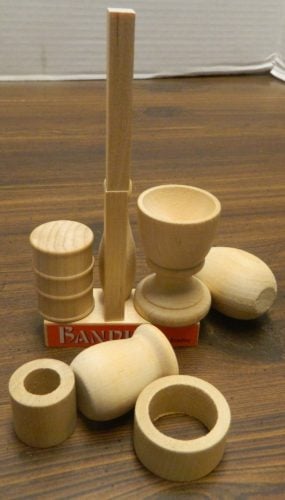 This player has lost the game because several pieces fell off their structure.

When all but one of the players have been eliminated, the last remaining player wins the game.

My Thoughts on Bandu

Before I get too far into the review, I would like to point out that Bandu is basically a re-implementation of the dexterity game Bausack. The rules seem to be basically the same and the only real difference seems to be that some of the pieces between the two games are different. Therefore this review will pretty much apply to Bausack in addition to Bandu.

The first unique thing about Bandu are the pieces themselves. While every stacking game uses their own type of pieces, most stacking games have uniform pieces with little to no variety between each piece. What is unique about Bandu is that every piece in the game is different. They aren’t just basic squares and rectangles either. There are egg shapes, bowling pins, cups, and many other strange shapes.

What I like about the unique shapes is that each game should play differently. In a game where all of the pieces are the same, once you develop a winning strategy there is no reason to deviate from it. With all of the pieces looking different though you really can’t develop a firm strategy that you can use every game. You have no idea which pieces you will get in a game and you will get stuck with pieces that will mess with your strategy. This means that you have to always be ready to change your strategy.

The other major difference between Bandu and most stacking games is the addition of the bidding mechanic. Before playing Bandu this was the mechanic that I was most interested in. I thought the mechanic was interesting since it could add a surprising amount of decisions/strategy to a genre of games that rarely has much strategy. While Bandu will never be considered a highly strategic game, the mechanic does succeed at adding strategy to the stacking genre.

The bidding mechanic adds some interesting decisions/strategy to the game for both the auctioneer and bidders. As the auctioneer you have to decide which type of piece that you would like to put up for auction. You basically have two decisions. You could choose a piece that is awkward and will really mess with the other players’ structure hoping that they will either get stuck with it or they will have to waste their beans to avoid it. Otherwise you could create an auction to bid for a piece hoping that no one pays for the piece so you get to take it for free.

As far as bidding there is also quite a bit of strategy since you need to be frugal with your beans. You will have to choose which pieces are crucial to take/avoid and not bid on the other pieces. If you use up too many of your beans early in the game you will be forced into taking pieces that you would otherwise like to avoid. This could mess up your tower really quickly.

While it is not perfect (more on this soon) I generally liked the bidding mechanic since it adds a decent amount of strategy to the game. While your stacking skills will likely decide who wins the game, a good use of the bidding mechanic can make a difference in the game. Players who wisely use their beans can gain a big advantage in the game. Players could also really mess with the other players by forcing them to waste beans or get stuck with pieces that they can’t really play.

While I liked the bidding mechanic I think there are a couple problems that keep it from being as good as it could have been.

First you don’t get nearly enough beans to start the game. You only start with five beans which means that you aren’t able to bid much on a piece or avoid placing many pieces. This is pretty easy to correct as you can just give each player more beans but this is an issue if you follow Bandu’s basic rules. With so few beans the mechanic just doesn’t factor into the game as much as it could have. With so few beans you basically have two options. You can be really frugal and only use beans when you absolutely have to. Otherwise you could use up your beans quickly but you will then be stuck with whatever pieces are given to you. Since the later strategy doesn’t really work, you are basically forced into being frugal.

The second problem with the bidding mechanic comes from the fact that I don’t see the reasoning behind paying beans to take a piece. The only reason I can see for paying for a piece is if you need it to stabilize part of your tower. For example you might have a rounded surface in your tower and there is a piece that could flatten it out. In my experience the only reason people ever put up pieces in to bid auctions are when the auctioneer is trying to get the piece for free. I just don’t think it makes sense to pay for a piece for two reasons. First I don’t see why you want to add more pieces to your tower. The less pieces you place on your tower the more stable it should be. Second I just think the beans are better off being used to avoid playing pieces. While playing a helpful piece can help you a little, being forced to place an awkward piece can really hurt you.

The final problem with the bidding mechanic is that it seems to tie a players’ fate to the actions of the other players. In general the stacking genre doesn’t rely a lot on luck. The player with the steadiest hands is usually going to win the game. This feels different in Bandu since you can really mess with the other players. If one player ends up having to take a lot of pieces, the player who plays after them has a pretty big advantage in the game. If a player can get through most of the game without taking many pieces or using many of their beans they are probably going to win the game. Based on the other players’ actions two equally skilled players could end up being in completely different situations by the end of the game.

Finally I would like to talk about Bandu’s contents. As a whole the contents are quite good. The wood pieces are really nice and are considerably better than I was expecting. The pieces are carved well and are sturdy enough that they should last for many games. The only thing I didn’t like were the beans. Maybe I am mistaken but the beans in Bandu appear to be the exact same beans used in the board game Don’t Spill the Beans. This is likely the case since Milton Bradley also made Don’t Spill the Beans. The beans are of a solid quality and only serve as counters but I find it kind of cheap that the game chose to reuse parts from another game.

Should You Buy Bandu?

Of all of the stacking games that I have played, I would probably say that Bandu is one of the best games that I have played from the genre. While the basic mechanics don’t really differ from any other stacking game, Bandu tweaks the formula to feel unique. Instead of using bland identical shapes, Bandu uses a wide range of different pieces which forces players to adjust their strategy to the shapes that they are forced to play. The other unique mechanic in the game is the idea of the bidding mechanic. I like the mechanic since it adds more strategy than you would think. The problem with the mechanic though is that the mechanic doesn’t play as big of role as it could have and actually allows players to have a little too much impact on other players’ fates. Basically Bandu is a very solid stacking game but it fails to do anything to appeal to people who don’t really like stacking games.

If you would like to purchase Bandu you can find it online: Amazon