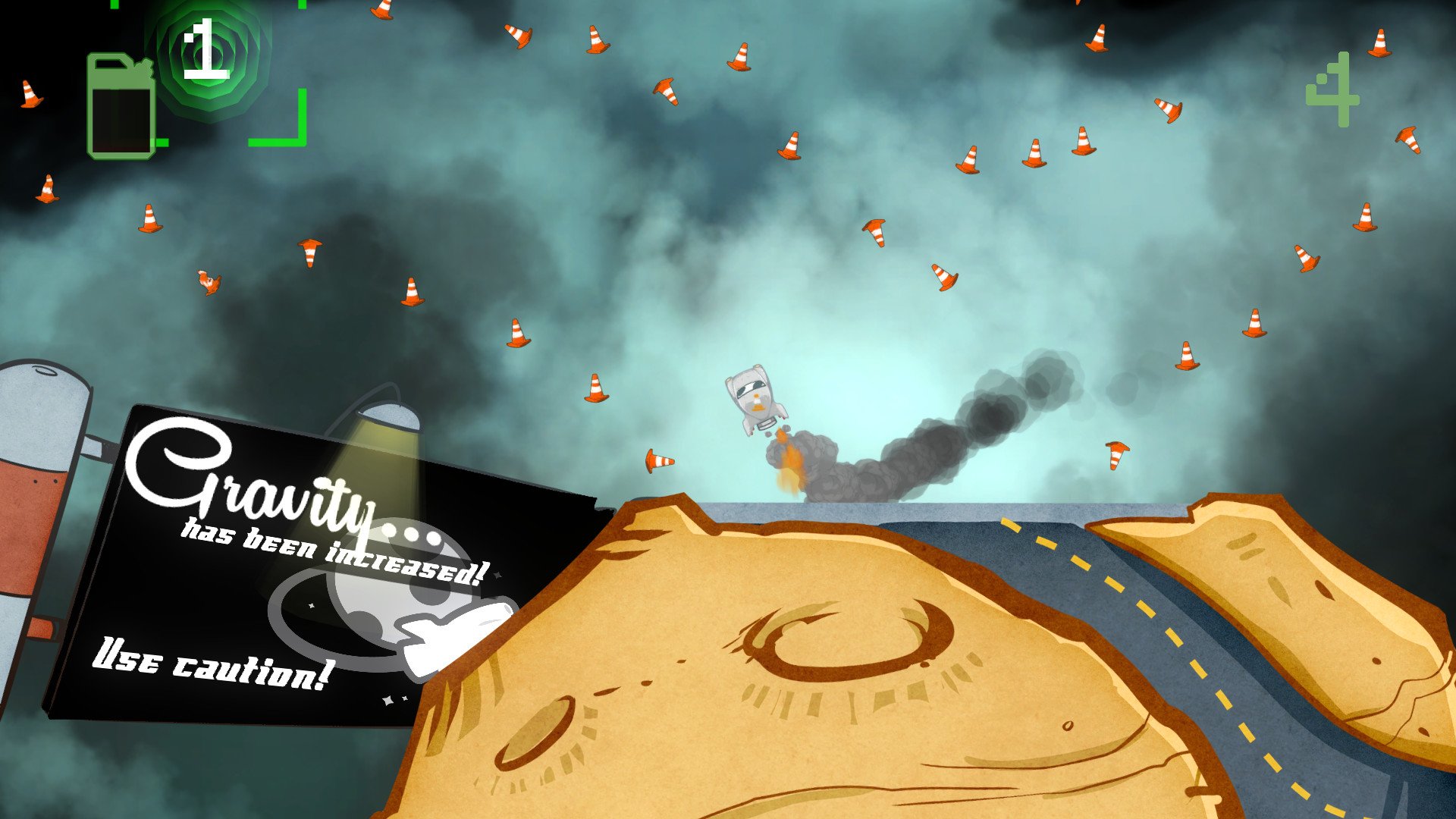 Would you like to join the exciting career of a space delivery driver? Get your driving license along with hundreds of thousand credits of debt and you too can join the exciting career of delivering space pizzas and hauling space cargo. Join the working class as you work for pennies as you spend your whole life paying off your debt. Doesn’t this sound like a great career option to you?

That doesn’t appeal to you? Well that is the premise behind Blue-Collar Astronaut. In Blue Collar Astronaut you begin the game receiving your first space driving license and the massive debt that comes with it. Once you get your license you have to pilot various spacecraft in order to earn a living to pay off your massive debt. These jobs include undergoing various driving tests, delivering pizzas and hauling cargo around the galaxy. The various jobs are basically quick little flying tests as most of the levels are only 30-60 seconds long. Your basic goal in most of the levels is to pick up items and deliver enough of them in time while keeping your ship in one piece.

The controls for Blue-Collar Astronaut are really simple since you only control the direction of the spaceship and the thruster. Using these two controls you need to control the spaceship to reach the designated area in a given amount of time avoiding as much damage as possible. At first it takes a while to get a hang of controlling your ship since you need to move quickly but not too quickly since it takes time to stop or change directions with there being little to no gravity. Once you get a hang of the controls though the game is pretty fun. Blue-Collar Astronaut kind of plays like an arcade style game.

Oddly enough the thing that first drove me to Blue-Collar Astronaut was the theme. I don’t know why but I thought the idea of getting trapped under a mountain of debt and having to work menial space jobs to pay off the debt was an interesting premise for a video game. With all of the issues with student debt in the United States I thought this provided a premise for a funny story as you worked your way out of your debt. While the game has some clever moments with the theme I think the game could have done more with the premise than it does. While I will address this more later, the game actually does a really good job at simulating the overbearing feeling of being stuck with massive student debt.

While I had fun with Blue-Collar Astronaut, the biggest problem with the game is that there is just way too much repetition in the game. The game comes with a little over 40 levels which are unique and fun to play. The problem is that a lot of these levels only last around 30-60 seconds so you can play through all of them pretty quickly. You obviously won’t complete all of them on your first attempt but even if you fail quite a bit you should still breeze through all of the levels. Basically you can play through all of the different levels in the game in around 1-2 hours.

If you are a completionist and can’t stand having outstanding debt in Blue-Collar Astronaut, you are in for a long ride. You better be ready to complete all of the levels at least five to ten times and even then I don’t know if you will be able to pay off your entire debt. While I am guessing that it is possible to pay off your debt, the game does not make it easy. I don’t know if this was intended but the game really hammers home the point that it is hard to pay off a student debt. Outside of winning the lottery you really have to be committed if you ever want to pay off your entire debt.

The fact that it feels like it will take forever to pay off your debt is disappointing since it makes the financial management portion of the game kind of pointless. Your ultimate goal is to pay off your debt and the game gives you the opportunity to purchase upgrades which will help you do that. You can buy upgrades that allow you to take additional damage or upgrades that will reduce your recurring expenses and thus allow you to put more of your salary towards paying off your debt. While these mechanics are really simplistic, they are an interesting addition to the game and could have went somewhere as you tried to manage your character’s finances as they made a career as a delivery person. These mechanics really lose their meaning though since I don’t see most people having the motivation to play the game long enough to actually take advantage of them.

Blue-Collar Astronaut is an interesting game because there are quite a few things I like about it but there are some serious faults. The gameplay is fun even though it is a little on the simplistic side at times. The story/theme is interesting even though I think the game could have utilized it better. The big problem with the game though is that there is just so much repetition in the game. You can basically play all of the levels in an hour and a half to two hours. Then you are left replaying the same levels over and over again with only slight tweaks.

If the game’s premise interests you and you don’t mind the repetition of playing the same levels over and over again, I think you will enjoy Blue-Collar Astronaut. If you are not a big fan of repetition though I think you are probably better off waiting for a sale on the game.