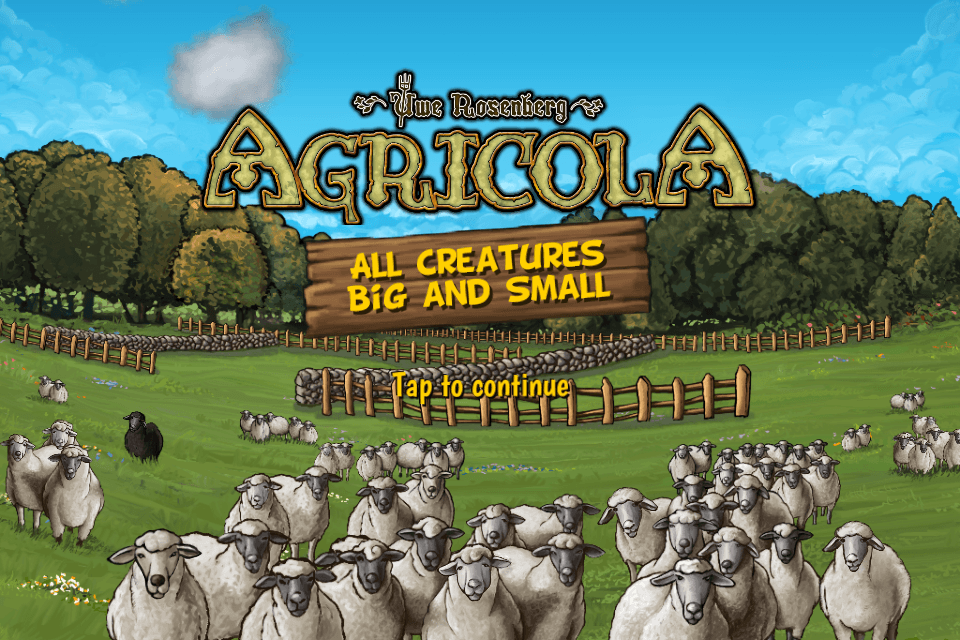 Note: This is a review of the Android, iOS, and Windows 10 app adaptation of Agricola: All Creatures Big and Small. I played the game on Windows 10. This is more of a review of the app itself instead of the board game.

I am not going to really get into much of the specifics of the gameplay since the game has been around for a while and most people are probably already familiar with how the game is played. I enjoyed the game for the most part. Agricola: All Creatures Big and Small is pretty simple and yet has quite a bit of strategy at the same time. At times it feels deceptively simple since it is pretty easy to pick up but there is quite a bit of strategy in the game when you think about it. When I first started playing the game I had a hard time forming a winning strategy. This was partially due to the tutorial (more on this soon) but is was also because Agricola: All Creatures Big and Small is the type of game that takes a while to fully appreciate. After my first game I found the game to be solid but a little disappointing. As I continued playing the game I started liking it more.

The biggest complaint I have with the game itself is the fact that I don’t think the game gives you enough turns. This isn’t a complaint against the app but the game itself since the app gives you eight turns just like the board game. Having only eight turns makes the game pretty short but it feels like there aren’t enough turns to do what you want to do in any given game. The game gives you ways to expand your farm to store a lot of animals but you don’t have enough turns to actually acquire a lot of animals. The problem with the app is that with the board game you could create your own house rules to add turns but this is not possible in the app.

Overall I found the game’s interface to be solid. The game’s menus are pretty easy to navigate and after playing a game or two you should have no trouble navigating the game. The interface has some little annoyances at times though. The biggest issues with the interface is when you go into full screen mode (Windows 10 version). For some reason your sheep totals are cut off the top of the screen when you put the game into fullscreen. There are also a couple graphical glitches in the tutorial (while in fullscreen). The interface works fine for the game but I think it could have been improved upon.

I think there are four main reasons why you should consider purchasing Agricola: All Creatures Big and Small. These include automatic scorekeeping, online multiplayer, computer AI, and price.

While the scorekeeping for the game is not that complicated, it is nice that the game keeps an updated score as you play. It is nice to see the current score for the game since you can see your current standing against the other player. The scorekeeping works well for the most part. I wish the game would have a feature though where you could see the impact of an action on your score before confirming an action. The game also has a little issue where it takes a while to update your score when you move animals around your farm.

The one unique thing that the app brings to Agricola: All Creatures Big and Small is computer controlled AI. The game includes three different difficulty levels: easy, medium, and hard. At this time I have played against both the easy the medium AIs. The easy AI is really easy. Outside of maybe your first game, you should always be able to beat the easy AI. The easy AI makes a lot of poor decisions which makes it easy to beat unless you make a lot of terrible decisions. The medium AI is more difficult but is still somewhat on the easy side. In my third ever game of Agricola: All Creatures Big and Small I was able to beat the medium AI by around 15 points. If you play smart and don’t make any big mistakes you will likely beat the medium AI most of the time. If the hard AI increases in difficulty as much as it increased from easy to medium, I would think that the hard AI could provide a pretty good challenge.

The final reason to purchase Agricola: All Creatures Big and Small is the simple fact that the app is considerably cheaper then purchasing the actual board game. The board game generally retails for around $40-$50 on Amazon while the app is only $4.99. If you already own the board game this is a moot point but if you don’t own the game and don’t really know whether you will enjoy it or not, purchasing the app is a much more affordable option.

Agricola: All Creatures Big and Small is a solid adaptation of a board game made into an app. The game works pretty well and the interface is pretty easy to use for the most part. The game automatically keeping score and making sure players are making valid moves are nice features. Also the app has value if you want to play against other people online. The game’s tutorial is not that great though as I found it easier to just follow the board game’s instructions instead of following the tutorial included with the game. If you already own the board game version and don’t really care about the online features or the automatic scoring I would probably pass on the game. If you are interested in the online games, the automated scoring, or don’t own the game and want a cheaper alternative for the game I think the app for Agricola: All Creatures Big and Small is a solid purchase.

Agricola: All Creatures Big and Small