The object of Reverse Curse is to become the player with the least curses at the end of the game. To begin the game the curse cards and the rest of the cards (the draw pile) are separated and are shuffled individually. The top three curse cards are turned face up so all of the players can see them.

Each player’s turn involves turning over the top card from the draw pile. If the card drawn is a component in one of the face up curses the player keeps the card in front of them. If the card is not part of one of the curses the card is placed into the discard pile. When one of the players gathers all of the components of a curse they are able to give it to any other player that they want. All players must discard all of the cards in front of them that only pertained to the curse that was just completed. The next curse card is turned over and play continues. 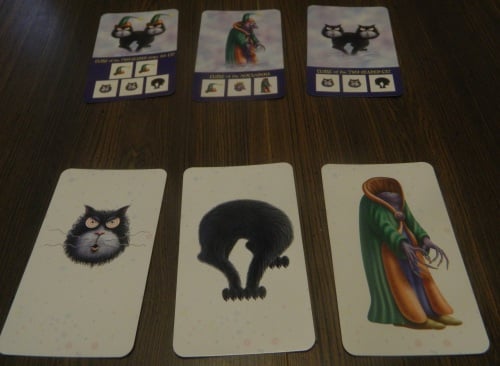 In addition to component parts, the game has several wild cards which are as follows: 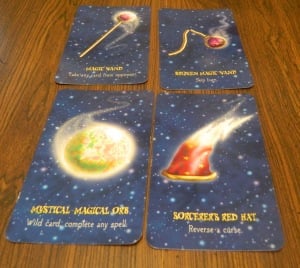 When all of the curses have been cast, the player with the fewest curses against them is the winner. If there is a tie, whoever has the least cards in front of them is declared the winner.

To get this out of the way, Reverse Curse is a children’s game.The recommended age for the game is 5+. I personally think that is highly generous. I would say a more appropriate age range would be 5-8 since it is a very simple game. I didn’t play the game with any children but I believe young kids would actually enjoy the game quite a bit. The game is simple to play and it has a charming theme to it. The artwork on the cards is quite nice and adds to the theme of the game.

Unfortunately that is where the positives end. Reverse Curse is not a good game. The game actually might have had some potential due to an interesting theme. The game mechanics also could have been tweaked some in order to make the game fun for children and adults. Due to trying to keep the game very simple though, the game never lives up to its’ potential. Reverse Curse is the type of game a parent plays more for the enjoyment of their child then for their own enjoyment. If you aren’t playing the game with young children, adults will get no enjoyment out of the game.

Simply put Reverse Curse is boring. Reverse Curse essentially boils down to drawing cards, and either placing them in front of you or putting them in the discard pile. This simple process is repeated over and over again until all of the curses have been cast.

The main reason Reverse Curse is so boring is due to the lack of strategy. I think you can make a good case that there is actually no strategy to the game. There is only one decision you have to make in the entire game and for the most part it isn’t much of a decision since an obvious choice is usually present. The game is really just based on luck. Since you can’t have an impact on what card you will end up drawing, whoever draws the right cards at the right times will always win the game. The players have very little to no impact on the game itself and that translates into a very boring game.

The only real decision you make in the entire game is deciding which player to cast a curse on. For the most part that decision is pretty pointless as well since the curses move around so often. Due to the game having four sorcerer red hat cards, curses will change hands many times during the game. In the game I played we went through the whole deck twice so eight sorcerer red hat cards were played during the game. So curses changed hands eight times during the game. Due to the abundance of sorcerer red hat cards it really doesn’t even matter who ends up completing a curse since it can be quickly switched to another player by whoever gets a sorcerer hat card. No matter who completes the most curses, if one player gets more sorcerer hats than the other players they are likely to win the game.

One idea I thought might add at least a little strategy to the game would be to include a way to remove a curse. I think the game should have had a rule where you could remove a curse from yourself if you have all the necessary components. This would have offset some the luck that currently dominates the game. It would also make the game  more complicated and longer though.

If you are not a young child, you will not enjoy Reverse Curse. I think children will enjoy the game, but the game is way too simplistic and has no strategy to it so the game is really boring for adults. If you have young children and can find the game for cheap I think it might be worth picking up. I would avoid the game in any other situation though.

Thank you! We lost the directions.