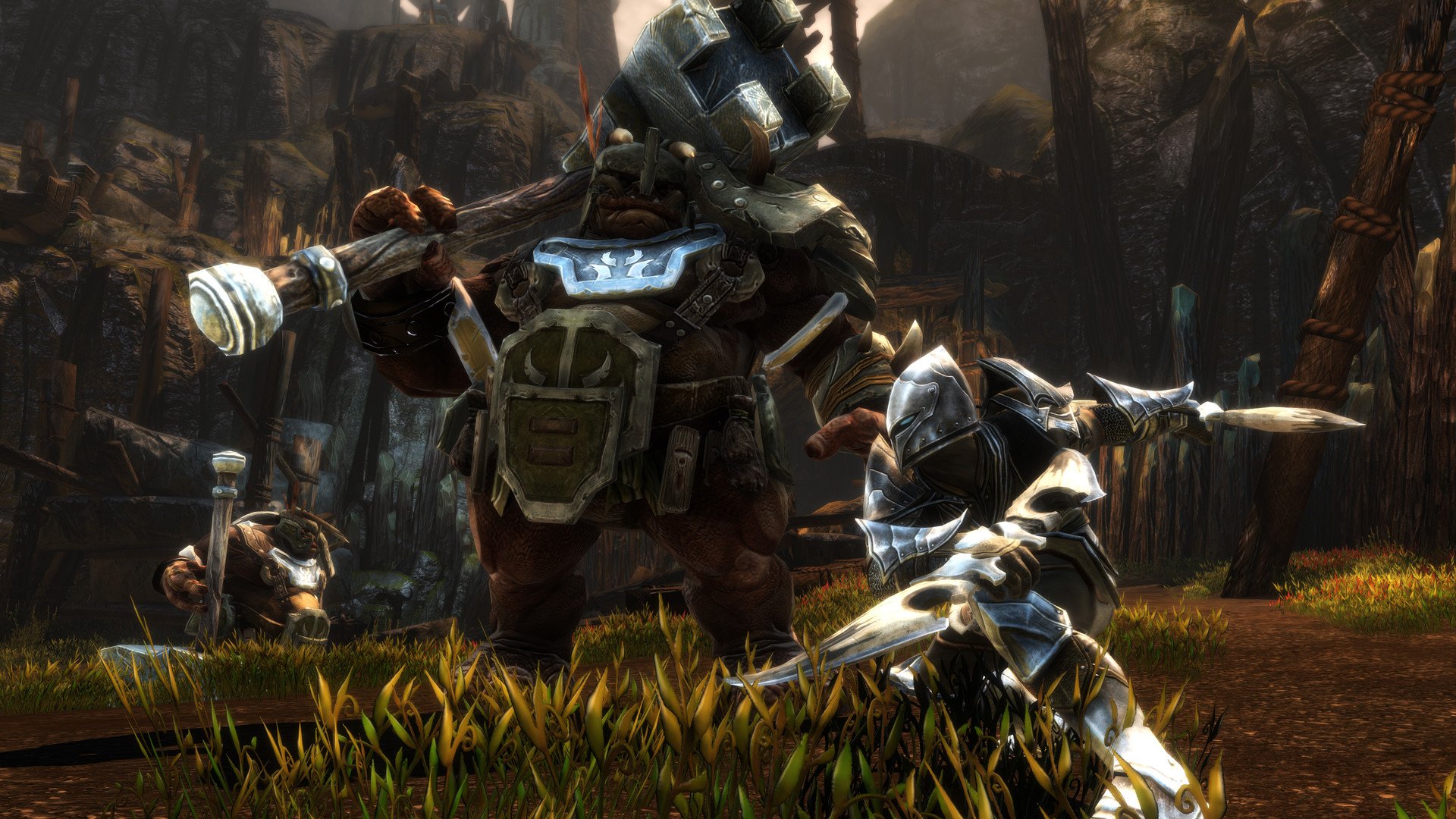 The original Kingdoms of Amalur: Reckoning was released back in 2012 and I remember it being considered groundbreaking when it was initially released. The developers were trying to create a grand new RPG franchise hiring a bunch of well known people in the industry as well as fantasy writers. In some ways the game succeeded in that task as it was genuinely well received by critics. The problem is that it sold poorly to the point where the studio that made it soon went out of business. The game developed a strong cult following though which likely lead to the remaster Kingdoms of Amalur: Re-Reckoning that I am looking at today. While I always wanted to try out the original game, I have to admit that I never actually got around to playing it. With the remaster though I thought it was finally time to check it out. Kingdoms of Amalur: Re-Reckoning is a really satisfying action RPG with a huge world to explore that at times shows its age.

In Kingdoms of Amalur: Re-Reckoning you play in the world of Amalur in the Faelands region. The world has been at war for a decade as the immortal Fae of the Winter Courts, the Tuatha, have waged war on the mortal races as they feel superior. You play as a mortal who at the beginning of the game arrives dead at the Well of Souls. The mortals have been utilizing the Well of Souls to try and bring their soldiers back to life in order to keep up with the immortal Tuatha. While all of their past experiments have failed, you are the first success. You soon discover that you are the “Fateless One” as you are the only mortal who doesn’t have a predetermined fate. As your fate is the only one not predetermined, you are the last hope to end the war that plagues Amalur.

Kingdoms of Amalur: Re-Reckoning is in many ways your typical action RPG. In the game you can choose to customize your hero however you want. The game has a number of different types of weapons ranging from longswords, hammers, daggers, bows, staffs, and many others. Each type of weapon has its own strengths and weaknesses. The game also has three different classes might (warrior), finesse (rogue), and sorcery (mage) that players can specialize in even though players can end up increasing their skill in all of them. As you advance in the game you unlock skill points which can be used to purchase various abilities to further customize your character. Like many RPGs the game is mostly focused on main and side quests where you have to collect specific items, kill creatures, or reach certain locations.

On the combat front the game features a number of different mechanics. You will be able to equip both a main and secondary weapon with one button being used for each weapon. Each weapon type has its own strengths and weaknesses as some are more powerful but slower, while others are faster but deal less damage. The game also features a number of ranged weapons. In addition to using your weapons you also have access to a shield which blocks enemy attacks and a dodge to avoid them. Players also can access certain special abilities that they have unlocked and you can quickly access potions that you need in combat.

If I were to describe Kingdoms of Amalur: Re-Reckoning’s combat I would say that it kind of feels like a mixture of an action game and a more tactical combat game like Dark Souls. In a lot of ways the combat is quick. In some ways the combat feels like a button mashing game as you will regularly be pressing the same buttons over and over again. You have a number of different options open to you, but you will probably spend most of the time spamming your main attack button. Where the game differentiates itself though is that it also relies quite a bit on dodging and using your shield. You are usually outnumbered where you have to keep track of all of the enemies around you so you can block or dodge their attacks. Getting hit can cause quite a bit of damage where you can’t rely on just spamming the attack button.

I honestly think the combat and gameplay in general is arguably Kingdoms of Amalur: Re-Reckoning’s greatest strength. The combat is just really satisfying. The game finds the perfect balance between the two extremes. The combat is really quick which keeps it entertaining as you have to always be on the move. At the same time the combat requires enough skill where it doesn’t feel like it is just a button masher. There are plenty of ways to customize your character to best fit your play style which includes quite a few different weapon types. The gameplay is not particularly revolutionary, but it is really satisfying.

If the gameplay isn’t the game’s greatest strength it might just be the amount of content available in the game. Simply put the game is filled with a ton of content. I have already played the game for a pretty long time and I have yet to scratch the surface. Outside of the Elder Scrolls/Fallout series I don’t know if I have ever played a RPG with more content. The game world is huge and you will regularly run into new quests to check out. Each location you encounter has at least one sidequest attached to it and most have several. I haven’t completed the game so I can’t give a definitive length, but based on the original game anyone who likes the action RPG genre should have no qualms about the length. Based on the original game you can probably expect around 25-30 hours if you mostly just focus on the main storyline. When you add in the side missions, exploration, and other tasks for completionists, you can expect at least 50+ hours which very easily could approach 100 hours. While some of the sidequests are kind of generic, you have to give the game credit for the amount of content that it stuffed into the game. Fans of the genre will easily get their money’s worth out of the game.

One of the biggest selling points for the game when it was first released was the fact that the developers devoted a lot of time and effort into creating the game’s world. They even hired the best selling author R.A. Salvatore help write the story and create the world. I believe that the game was originally meant to be the start of an entire franchise. This obviously never happened when the game ultimately ended up losing money. You can definitely tell that a lot of effort was put into crafting the game’s world. The creators created an entire world and not just the main storyline. While the game features a number of fantasy tropes, it does some unique things as well. The world really feels like its own thing with its own long history. The only problem with the world and story is that at times the game likes to just dump lore on you where it is sometimes hard to follow. This drags the game down at times. Anyone who is a fan of fantasy RPGs though should really enjoy the world that Kingdoms of Amalur: Re-Reckoning creates.

For those that are interested in how Kingdoms of Amalur: Re-Reckoning compares to the original game it is pretty much what you would expect from a remaster. The remaster includes all of the DLC from the original game. Most of the actual gameplay seems to be mostly the same. I am guessing the controls were fine tuned a little and how the enemies’ levels are determined was tweaked. As for additions the remaster has added a very hard difficulty setting.

The biggest obvious change for the game is the graphical improvements. As I never played the original game I can’t make any direct comparisons about how much better the remaster looks. Compared to a typical PS3/Xbox 360 era game I would say that the graphical improvements are kind of hit or miss. I will preface this by saying that I played a pre-release version of the game so more graphical improvements could have been added for the final release. At times the graphical improvements are noticeable as they do a pretty good job upgrading the game to come closer to more modern games. The graphics clearly don’t look quite as nice as a game designed for current consoles, but they look nice enough that fans should be happy. The problem is that some elements of the game don’t look significantly better than the original game. I am guessing that part of this is due to the fact that the game has significantly more content than most games that are remastered so the same amount of effort couldn’t be applied to all parts of the game. Mostly the game looks like what you would expect from a remaster of a game made eight years ago.

Comparing Kingdoms of Amalur: Re-Reckoning to the original game brings up arguably the biggest problem that I have with the game. When it was originally released eight years ago it was pretty revolutionary for its time. The game had a lot of interesting ideas for the genre that weren’t really present at that point. Eight years later and the game doesn’t feel quite as original anymore. Many of the things that made the game unique when it first came out are pretty standard in the genre today. The game deserves credit for pioneering some mechanics that the industry adopted, but the remaster doesn’t really stand out in any significant way from the other games in the genre. Today it just feels like another action RPG. The game is still quite satisfying, but it doesn’t really bring anything to the table that can’t be found in other games.

Kingdoms of Amalur: Re-Reckoning is in many ways what you would expect it to be. The game is basically what you would expect from an action RPG from the PS3/Xbox 360 era. Many of the mechanics are similar to your typical action RPG as you can choose from a number of different classes and weapon types. The combat kind of feels like a combination of action games and more nuanced combat. The combat is quick, but there is also a reliance on dodging and blocking attacks. The combat is really satisfying and one of the game’s greatest strengths. The other thing that Kingdoms of Amalur: Re-Reckoning excels at is just the quantity of content. The size of the world and the number of quests is impressive where you will easily get your money’s worth. The game also has an interesting world to explore even though it sometimes resorts to lore dumps which are sometimes hard to follow. The game’s main problem is just the fact that it has aged in some ways. The game was pretty revolutionary when it was first released, but today it doesn’t really do anything particularly original.

If you have never really cared for action RPGs I don’t see Kingdoms of Amalur: Re-Reckoning being for you. Fans of the genre should love the game though and should seriously consider picking it up.

)Where To Purchase: Steam