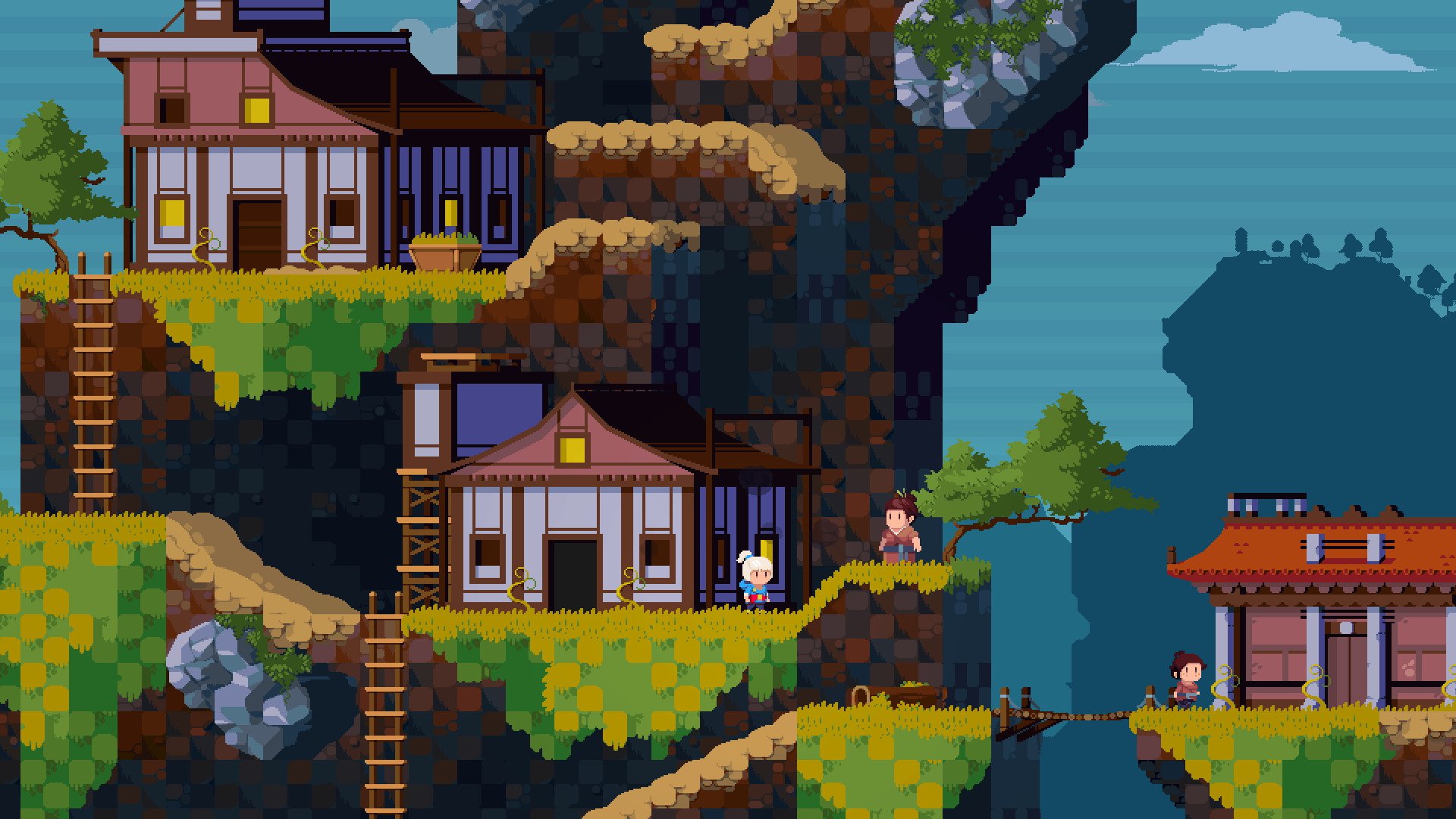 Here on Geeky Hobbies we have taken a look at quite a few different indie games. Of all of the different genres that we have looked at the puzzle platformer is easily the genre that I have probably reviewed the most games from. Much of this is due to being a huge fan of both platformers and puzzle games. I generally like to try out any game that I see from this genre as I tend to like most of them. When I saw YesterMorrow I was especially intrigued because I have always liked time travel and I think it is a good mechanic to add to a puzzle platformer. YesterMorrow could have probably utilized the time travel mechanic better, but the game still succeeds at crafting an enjoyable and satisfying puzzle platformer adventure.

In YesterMorrow you play as Yui. Yui’s world is plunged into darkness when shadow monsters invade. Many of the villagers are captured and the buildings are destroyed. Years later Yui encounters the guardians of her people and is gifted the ability to travel in time to try and stop the shadows. Traveling between the present and past Yui must learn how to use Everlight to defeat the shadows and return peace to her world.

At its core YesterMorrow is pretty much your typical 2D puzzle platformer. The main objective of the game is to jump between platforms in order to reach a particular destination without falling into a pit or running into enemies. To begin the game you are just given your typical left and right movement as well as a single jump. As you progress through the game you are given a number of other abilities which include a double jump, a dash, and a few other abilities that either help with the platforming or dealing with enemies. Along with the platforming there is also some light combat which mostly involves avoiding enemies and their projectiles, and using one of your abilities to deal with them. Finally there is some light puzzle solving which involves activating switches and utilizing the time travel mechanic to get past obstacles.

Being a big fan of the puzzle platformer genre I pretty much got what I expected out of YesterMorrow. The game is a fun and completely solid puzzle platformer. The controls are simple, and the gameplay is straightforward. It is satisfying jumping between the platforms and dealing with the enemies that stand in your way. If you have ever played a puzzle platformer before you probably already have a pretty good idea of what to expect from the game. Fans of the genre should enjoy the game, while those who don’t really care for it are unlikely to find anything that will drastically change their opinion.

I ultimately found the mechanic to be solid if not a little underutilized. As you can only change time periods at specific areas in the world, the ability to change between time periods is a little limited. This was likely done so the levels wouldn’t break with players trying to change into a different time period and end up in a wall or down an inescapable pit. It does put quite a few restrictions on the mechanic though. While switching between time periods is key to making progress in the game, it is usually pretty obvious which time period that you need to be in at any given time making the game a lot more linear than I was expecting. There are a couple puzzles that require you to think about what time period that you need to be in and switching back and forth pretty quickly. The hardest decisions about what time period you need to be in though comes down to finding the various collectibles hidden around the world. All too often in the game though you will hit a dead end which obviously shows that you need to switch to the other time period in order to proceed.

While I was a little disappointed by the time travel mechanics, I thought the game did a good job with the level design. I will admit that the game does have a couple instances where it is a little hard to tell where you need to go next. There are also a few instances where it is hard to tell what elements are in the foreground and background. Other than this though I think the level design is quite good. As I mentioned earlier as you progress through the game you will unlock a number of different special abilities. I thought the game did a very good job utilizing these mechanics together to create some interesting and challenging platforming sections

. In particular the very end of the game features quite a few platforming challenges that will really test how well you can use these abilities together.

As for YesterMorrow’s controls I think they are pretty good most of the time. The controls are straightforward as each special ability is given its own button. The controls are pretty responsive for the most part as the game reacts pretty quickly to your inputs. Anyone who has any experience with puzzle platformers shouldn’t have any troubles with the controls. While they work well most of the time, there are occasionally a few issues that may lead to some deaths/loss of health. The wall jump in particular has some issues as it looks like you are touching a wall, but the game doesn’t recognize it. There are also some occasional issues with the collision detection with enemies and their projectiles. For the most part though the controls are a positive for the game.

Being a big fan of the puzzle platformer genre I have played a lot of games from the genre. This makes it sometimes hard for me to discuss the difficulty of games from this genre as I have a lot of experience with the genre. With regards to YesterMorrow I had mixed opinions on the difficulty. I would say that a majority of the game is actually quite easy. Much of the platforming is pretty straightforward as the game gives you enough leeway. This does change a little towards the end as some of the platforming towards the end of the game can be somewhat difficult as you need good timing and need to use the different abilities together. Probably the hardest part of the game is the various bosses you fight along the way. Some of these can be quite difficult as I died quite a few times to some of them. This was mostly because I have never been great at avoiding enemy projectiles. Based on this I would say that the game is moderately difficult. Some parts are quite easy while others can be pretty challenging.

Outside of the gameplay I would say that the game’s overall atmosphere and story are pretty good as well. In particular I thought YesterMorrow did a good job with the visuals and audio. The game utilizes a pixel art style that works really well for the game. There are parts of the game that look fantastic and I thought the character design was quite good. Unless you hate the pixel art style I see no reason why you wouldn’t like the game’s overall style. I thought the audio was quite good as well as it gets you into the game’s overall mood. The game relies on text instead of voice overs, but this isn’t a big deal. The story was solid as I wanted to see how it would end. As a fan of sci-fi/fantasy though I will say that there are elements of the story that seemed kind of familiar. The story is enjoyable, but I wouldn’t say that it is highly original.

Before wrapping up I wanted to quickly talk about the game’s length. As I played the game on PlayStation 4 I can’t give you a definitive length for how long it took me to beat the game. I can only give you an estimate. I would guess that it took me around six to eight hours to beat the game, but this is a total guess. How long it will take to beat the game will depend on a couple of factors anyway. Obviously how good you are at the genre will have an impact as each death will set you back some. The bigger factor though comes down to how much of a collector you are. The game has quite a few collectibles scattered around the world along with various animals that you can pet (for an achievement). Some of these are pretty easy to spot while others require quite a bit of searching as they are hid well. While playing the game I mostly explored any areas that I thought looked suspicious picking up any collectibles that I saw. I didn’t extensively just search for collectibles though so there were some that I missed. The collectibles are mostly used for achievements, but if you collect all of them they also have an impact on the game’s ending. As I didn’t find all of the collectibles I think you could probably add a couple hours to the game’s total runtime if you went through the effort trying to find all of them.

In many ways YesterMorrow is exactly what I expected it to be. At its core the game is a puzzle platformer. The game does add a time travel mechanic which is interesting addition to the game. I think it could have been utilized more though as most of the time it is really obvious what time period you should be in. At the end of the day YesterMorrow might be like most other puzzle platformers, but that is not really much of a problem. The game is a good example of the genre and it is fun to play. The difficulty can be a little up and down, but it can present a real challenge at times. The atmosphere is also pretty good as the visuals and audio are great even if the story is a little formulaic. YesterMorrow doesn’t revolutionize the genre in any significant way, but it didn’t really need to as it succeeds at being a fun puzzle platformer.

If you have never cared for the puzzle platformer genre I don’t see YesterMorrow changing your opinion. Fans of the genre should enjoy the game though and should consider picking it up.