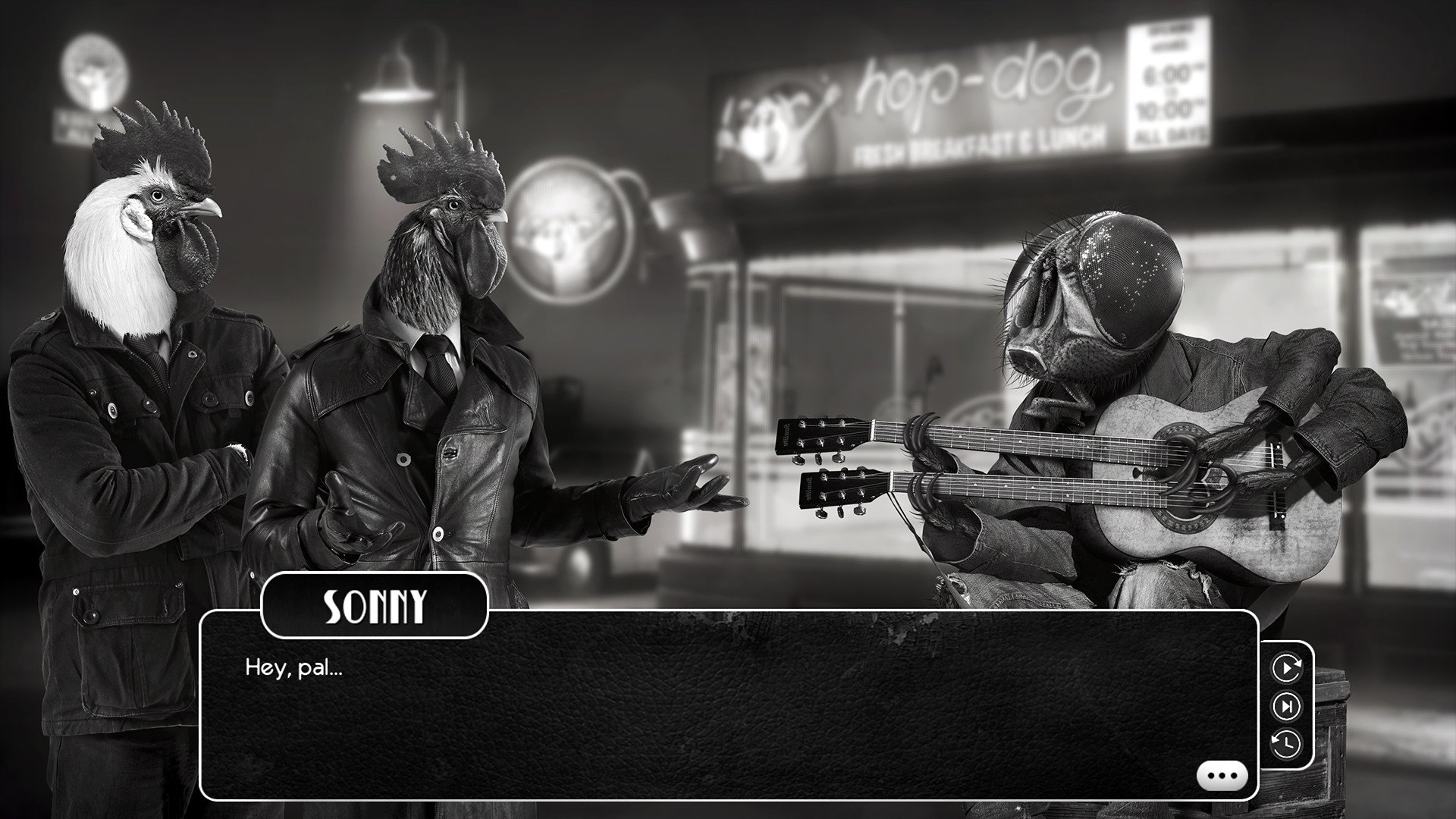 Anyone familiar with my taste in video games are probably well aware that I am a huge fan of games with weird premises. As soon as I saw Chicken Police – Paint it RED! I knew that it was a game that I had to check out. How could you not be intrigued by a noir themed point and click game featuring animals with strangely human bodies. While the theme was what initially intrigued me, I was also excited about the point and click elements as I am a pretty big fan of the genre. Chicken Police – Paint it RED! may be a little light on the puzzles, but it succeeds at creating a truly original universe and a compelling mystery.

In Chicken Police – Paint it RED! you play as Sonny Featherland. Sonny was a world renowned detective as one member of the famous detective duo the Chicken Police. Sonny has had some hard times recently though as he has been placed on administrative leave as he waits for his imminent retirement. His career feels over until a mysterious stranger arrives at his apartment. This stranger’s employer has been receiving threats. Reluctant at first Sonny decides to take on one last case bringing his old partner Marty MacChicken along for the ride. What initially seemed like harassment quickly turns out to be much more as Sonny and Marty are flung into a hidden world of crime and corruption simmering beneath the surface of the city. Can Sonny and Marty solve the case and return honor and dignity to the once famous Chicken Police?

So if I were to describe the gameplay of Chicken Police – Paint it RED! I would say that it feels like a combination of a traditional point and click game and a visual novel. Anyone familiar with a point and click game will be familiar with many of the game’s mechanics. The gameplay basically revolves around scanning a static background searching for objects and other characters to interact with. When you click on an object you will usually either pick it up or your character will make some comment about it that might give you more information about the case or the world in general. Interacting with other characters allows you to observe them, talk to them, ask questions, or in some cases interrogate them. Talking with other characters mostly involves you choosing what to talk about and getting information that will help with your case.

While it doesn’t come into play a lot, the interrogation mechanics are one mechanic in the game that are actually kind of unique. At critical points in the game you are given the opportunity to interrogate key witnesses and suspects. Each interrogation begins with Sonny giving you some observations that he has made about the person you are about to interrogate. This includes weaknesses and other pieces of information that you are supposed to use to help you choose which questions to ask. Each question that you ask will either increase or decrease a meter which determines how forthcoming the other character will be. This is determined by whether you choose the question that best fits the observations that Sonny made. As you get more information your profile of the character gets better allowing you to ask more informational questions. I don’t know if your success in the interrogation impacts the story at all, but at the end of each interrogation you will receive a grade based on the quality of questions that you decided to ask.

At this point Chicken Police – Paint it RED! probably sounds like every other point and click game. So why did I say that it also felt like a visual novel? Well that comes from the fact that the game doesn’t really have the emphasis on puzzle solving that most point and click games usually have. The game has a number of puzzles to solve, but they don’t play a large role in the overall game. Instead of trying to figure out how to use the items you picked up to solve puzzles, most of the gameplay revolves around observing the environment and talking to the other characters. This is the main reason why I compared the game to a visual novel as there is a much greater emphasis on the story rather than the puzzle solving.

Personally I don’t see this as a huge deal for the game. I wish the game had a few more puzzles to solve, but I still thought the game was pretty enjoyable. The game just relies considerably more on its story over puzzle solving compared to most other point and click games. This might be an issue for people mostly interested in the genre due to the puzzle solving though as I wouldn’t say that the puzzle solving is a good reason to play the game. Instead to enjoy the game you really need to be interested in the game’s story and overall world.

The reason that I didn’t mind the lack of puzzles was the fact that the game’s story is actually quite good. From the very start it is pretty obvious that the game relies heavily on the film noir theme. In many ways playing the game feels like watching an old detective movie. From the black and white visuals to the dialog and overall atmosphere fans of the noir theme have a lot to like about the game. The story is well written and all of the characters are voice acted. The voice acting is very good as well. While the story is pretty serious for the most part, it was funnier than I expected. I will warn people though that the game relies on a lot of animal puns. Some are pretty clever while others are kind of groan worthy.

While on the topic of the theme/atmosphere I need to talk about the animal human hybrid premise that the game utilizes. Basically the world of Chicken Police – Paint it RED! is based around a world where humans are a legend/myth. Instead all of the characters have animal heads, and some have tails or other animal features. The rest of their bodies are human though. When I first saw this in the game’s trailer it immediately stood out. How could it not? I have to be honest the game’s style choice is a little weird at first. The game probably has one of the weirdest themes that I have ever seen in a game. This shouldn’t be taken as an insult though as I actually think it is one of the game’s greatest strengths. The style is kind of weird, but it actually works really well for the game. The game’s visuals in particular are actually really good.

When most people see Chicken Police – Paint it RED! they are probably going to think that it is satirical and generally just kind of wacky. The game has its moments as it definitely embraces the absurdity of the premise. I was actually surprised that the game is much more serious than I was expecting though. The game actually has a lot of backstory as quite a bit of effort was put into building out the game’s world. The world of Chicken Police is quite compelling. For this reason I am really curious if the game will end up getting a sequel. A lot of this can easily be missed if you just do the bare minimum, but if you take the time to explore you will get a lot more out of the game’s story. The story feels like your typical crime/detective story. It goes to some dark places at times and includes quite a bit of swearing and other adult themes. Basically the game is not for children. I found the story to be compelling which really helps drive the game. Those that think the story sounds interesting should really enjoy the game’s story.

As for Chicken Police – Paint it RED!’s length it kind of depends on what type of player that you are. The game itself seems pretty linear as it doesn’t appear like there is a way to change what happens in the story. Thus you could easily rush through the game only doing what is necessary to progress the story. This will lead to the game being quite a bit shorter than if you take your time and really explore. The game actually has a lot of hidden lore and conversations that aren’t necessary to complete the game, but create a much fuller overall story. For example the game has a number of locations that are optional which mostly just give you more story information. The game does a good job warning you when the story will advance so you don’t miss out on this optional content. As I approached the game trying to find every hidden piece of information while taking my time exploring, I ended up taking around eight hours to beat the game. Those not interested in fully exploring the world will likely finish the game a couple hours earlier.

When I first saw Chicken Police – Paint it RED! I knew that it was a game that I wanted to check out. The premise intrigued me because how could you not want to check out a game with chicken cops and other animal human hybrids. At its core the game is your typical point and click game as much of the game is about exploring locations, searching for clues, and talking to potential witnesses. The game also has an interesting interrogation mechanic. Unfortunately it doesn’t rely on as many puzzles as I would have liked. Because of this the game relies heavily on its story. Thankfully Chicken Police – Paint it RED!’s story is one of its greatest strengths. The story feels a lot like your typical noir detective story. The theme, story and visuals are very good. The fact that all of the characters have animal heads and human bodies is a little strange, but the game embraces it. The story is quite a bit deeper than I was expecting though as it actually developed a pretty deep background for the world.

Basically my recommendation for the game comes down to your feelings toward the overall premise and games that are mostly story driven. If you don’t care for the premise or don’t like story driven games, Chicken Police – Paint it RED! probably won’t be for you. If you don’t mind story driven games though and have any interest in the premise, you should really enjoy Chicken Police – Paint it RED! and should consider picking it up.