Created back in the 1800s, Chinese Checkers is a pretty popular abstract strategy game. The objective of the game is to get all of your marbles to the other side of the gameboard which is mostly done by players jumping their marbles over other marbles. I bring up Chinese Checkers because as soon as I began playing today’s game Yali I was immediately reminded of it. It is not surprising that games have been created that are inspired by Chinese Checkers as it is a popular game and has been in the public domain for quite a while. Yali is an interesting take on Chinese Checkers as it adds strategy with a balancing mechanic but it still ends up being a pretty boring game.

How to Play Yali

On a player’s turn they will move one of their marbles. Players usually can only move their marbles forward or diagonally. Players are only able to move marbles horizontally when they are in one of the two starting zones. Players can choose one of two ways to move a marble. 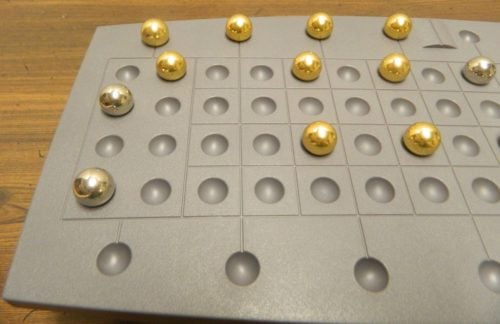 The gold player has gotten one of their marbles across the gameboard. They will get to move one of their edge marbles towards their side of the board.

A player wins when they get all eight of their marbles into the starting section on the other side of the gameboard.

The silver player has gotten all of their marbles to the other side of the board so they have won the game.

My Thoughts on Yali

While the two games look quite a bit different I would say that Yali shares a lot in common with Chinese Checkers. The games share so much in common that I would basically say that Yali is Chinese Checkers played on a seesaw. Just like Chinese Checkers the goal of the game is to get your marbles to the other side of the gameboard before your opponent does the same. This mostly involves finding ways to jump over your own and your opponent’s marbles. The one unique thing about Yali is the gameboard is placed on a pivot that swings back and forth to indicate which player gets to take the next turn.

The other main strategy in the game involves trying to take advantage of jumps as often as possible. Jumping can really help you since you can gain a couple of spaces that you otherwise wouldn’t have gotten before the board swung towards the other player. If you could create a ladder of jumps from your side to the other side of the board you could quickly move your marbles across the board. The one catch is that your opponent could likely do the same thing. If you could find a way to do this where the other player couldn’t capitalize on it, it could really help your chances in the game.

For an abstract game I would say that Yali has a moderate amount of strategy. Yali is a pretty straight to the point game. The game has a recommended age of 8+ and that seems appropriate since I think kids slightly younger might also be able to play the game even if they don’t fully understand the strategy. The game is so simple to pick up because all you do on a turn is move one of your marbles forward a space or jump over a marble to the next unoccupied space. While the game is pretty simple each move could have a pretty big impact on the game. Since both players are likely going to be pretty close to one another at the end of the game, the right move at the right time could be the difference between winning or losing the game.

I think one of Yali’s biggest strengths is the fact that the ending will usually be really close. I see most games ending with the losing player only being one or two turns away from winning themselves. This is mostly due to how the game decides who gets the next turn. If one of the players gets out to a big lead, the game naturally closes the difference by giving the player that is behind several turns which they can use to help catch up. The only way I could see a player winning in a landslide is if they are able to get out to such a lead that they can get all eight of the edge marbles on their side of the board. Otherwise the game will naturally swing back and forth where neither player can get a large lead in the game. With how close the end game is, I have a feeling that going first gives you a pretty big advantage in the game.

When I was reading through the rules of Yali they mention that the basic game has been solved in that there is a strategy that you can follow that will automatically win you the game. While there are a decent amount of games that have been solved, generally this is not a good thing. The problem with a game that has been solved is that once the players know the strategy to automatically win the game, the game is no longer fun since you already know what you have to do to win the game. While it will ruin the basic game of Yali, I am kind of interested in finding out what strategy automatically wins you the game. My guess is that it either involves mirroring the moves made by the other player or only moving one piece at a time while you keep the rest of the pieces as far back on your side of the gameboard as possible. If anyone actually knows the winning strategy I would love to hear it in the comments.

To fix the fact that the game was solved, later versions of the game actually include advanced rules that apparently remedy this problem. Even if the players haven’t figured out the strategy that will always win the game, I would recommend using the advanced rules. The only thing that the advanced rules add to the game is that they add more incentive to jump over the other player’s marbles since it lets you move your marbles on the edges of the board more often. I think this improves the game because the most interesting part of the game is when both of the players get their marbles close to the center of the board as they then can start jumping over each other’s marbles. This part of the game features the most strategy so by rewarding players for jumping over each other’s marbles should make this part of the game play a bigger role in the game.

While the components might not be much to look at, I give Jumbo credit for including pretty high quality components with the game. The most noticeable component are the metal balls. The metal balls have quite a bit of weight to them. Yali could have easily went with cheap marbles but they choose to include higher quality marbles. This was probably at least partially done because the weight of the balls play a pretty big role in the gameplay of Yali. If the balls didn’t have much weight to them it probably would have really messed up the balancing mechanic. With each ball having quite a bit of weight, any move could easily tip the board to the other side. The gameboard itself is pretty dull looking but is sturdy and well constructed. The gameboard even was designed with a storage tray for the marbles underneath. While there might not be a lot to the components visually, there really is not much to complain about regarding the quality of the components.

Yali is a solid game but its biggest problem is that it is just kind of dull. In the early game both players trade off moving two of their pieces forward a space or two and then wait for the other player to do the same. When both players get marbles near the center of the board the game picks up a little as players try to outmaneuver the other player so they can jump over their pieces. The problem is that once both players get past the center of the board, the game reverts back to just moving your pieces a couple spaces and then waiting for the other player. While the ending is close, the latter part of the game kind of drags along.

Should You Buy Yali?

When you first look at Yali there doesn’t seem to be much to the game. The game is basically Chinese Checkers played on a seesaw. While the movement mechanics are nothing new, the idea of adding a tilting mechanic to the gameboard actually adds more than I expected to the game. The tilting mechanic forces players to make moves to advance their marbles while keeping their side of the board heavier than the other players so they can take another turn. This actually creates quite a bit of strategy for how simple the game’s mechanics are. It also creates a game that is close until the very end. The biggest problem that I had with Yali is that I found it to be boring. The beginning and end of the game are pretty boring as you are just slowly moving pieces towards the other side of the board. The middle has some excitement but it ends too quickly.

If you are not a big fan of abstract games, especially games like Chinese Checkers, Yali is not going to be for you. If you like these type of games though and can get a good deal on Yali I would recommend picking it up.

If you would like to purchase Yali you can find it online: Amazon

Don't know the winning strategy yet....