Throughout the 1990’s and the early 2000’s there was a fad for the 3D puzzle. People must have gotten sick of traditional 2D puzzles and wanted something new. While there have been many companies that have made different types of 3D puzzles, the most well known brand of 3D puzzles is the Puzz 3D brand.

I was first exposed to 3D puzzles when I was a kid and a relative bought one for me. It was an off brand 3D puzzle of some type of castle. I remember trying to put the puzzle together and having quite a bit of trouble (partially due to the poor quality of the puzzle). I eventually ended up giving up on it and never bothered trying to finish it. This experience drove me away from the 3D puzzle craze since I never purchased a Puzz 3D puzzle when they were popular.

Being a fad you end up regularly finding these puzzles at rummage sales and thrift stores today. Being an avid thrifter I regularly run into these puzzles and a couple years back I decided to give them another chance. I have to admit that as an adult  I have become a big fan of the puzzles due to their challenge and how interesting they look when completed. If it wasn’t for the fact that most of these puzzles are missing pieces when you find them at a thrift store/garage sale, I would have a pretty large collection of them.

Today I am going to look back at the Puzz 3D craze. I will look at the history of the Puzz 3D brand, discuss some of the different types of 3D puzzles, give you some tips on how to go about solving a 3D puzzle, and finally show you where you can find some of the rarer 3D puzzles.

According to Wikipedia the concept for Puzz 3d puzzles was created by Paul Gallant. The first Puzz 3D puzzles were created by the Canadian company Wrebbit around 1991. Through the 1990s the puzzles grew in popularity which lead to many different types of puzzles being created. I remember for a couple Christmas seasons in the 1990’s where Puzz 3D puzzles were one of the more popular gifts to give.

Puzz 3d puzzles continued being successful until the mid 2000s. In 2005 Wrebbit sold the rights to the Puzz 3D brand to Hasbro. Hasbro produced the puzzles for a year until discontinuing the brand a year later. For several years the Puzz 3D brand appeared to be dead. No Puzz 3D puzzles were produced again until 2011. Since 2011 Winning Solutions, Hasbro, and Wrebbit3D have started reprinting some of the older 3D puzzles as well as creating some new designs.

When I started buying 3D puzzles at rummage sales and thrift stores, I knew there were quite a few different puzzles that were created. I was surprised when I found out that around 300 different designs have been made over the years. The first puzzles were of historic buildings from around the world. As the brand expanded so did the type of puzzles that were created. There have been puzzles made for popular cars and other vehicles, objects like a violin or a Monopoly board, and even sections of a city like New York. 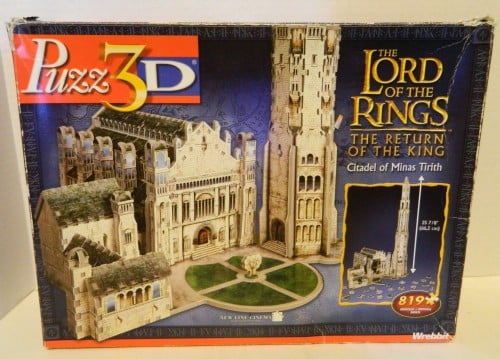 Not surprisingly these puzzles eventually made it to Hollywood with quite a few puzzles being made for various franchises. The Star Wars and Lord of the Rings franchises both have several different 3D puzzles. Being the geek that I am, I own quite a few of these puzzles. Unfortunately most of these puzzles are some of the harder puzzles to complete. Someday when I complete them I will put up a post with pictures of the puzzles completed to show them off. 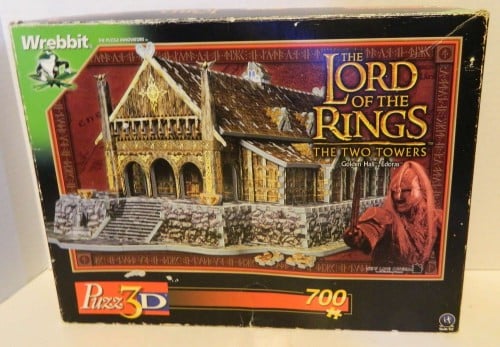 Strategy for Solving a 3D Puzzle

When I run into Puzz 3D puzzles at a thrift store or a garage sale, I regularly hear comments that the puzzles look cool but they look too difficult to put together. As a child I would have agreed with them since the puzzles seem hard to put together at first. The puzzles range in difficulty from easy (less than 100 pieces) to very challenging (over 2,000 pieces). While I have never tried one of the very difficult puzzles, I have completed several of the average to hard difficulty level. While the puzzles may seem daunting at first, I found the puzzles to be quite manageable if you take the right steps. You need to just think of the puzzle like it is a 2D puzzle.

If you have never tried a Puzz 3D puzzle before because you were afraid that you were not going to be able to solve it, here is a list of steps/strategies that I typically use in order to solve the puzzles.

After sorting the pieces by color/design, you will want to further divide each group of pieces. In a traditional jigsaw puzzles most people begin by building the outer edges/border of the puzzle. This same concept can be applied to 3D puzzles. The trick to 3D puzzles is determining which pieces are the edges pieces. In 3D puzzles along with pieces with flat edges, pieces with square notches also indicate edge pieces. At this stage I would recommend separating all of the pieces with flat edges or edges with square notches. Once these have been sorted out you will know which pieces will make up the outside of each section of the puzzle. You can then begin fitting the pieces together like a normal puzzle.

These three section of the puzzle are complete since all of the sides are either straight or feature the square notches.

Once you have completed all of the sections of the puzzle you are almost done. You will now be turning the 2D puzzles into a 3D puzzle. Most of the puzzles include instructions that help you figure out where each section is ultimately placed. If you buy a used copy and the instructions are missing, the outer box should help you out since you can see what the final structure looks like. 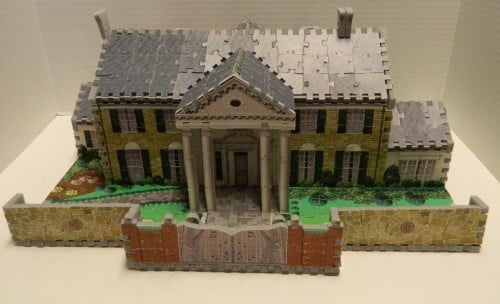 Here is a picture of the completed Graceland Elvis Presley’s Legendary Mansion puzzle.

So I hope that was a good introduction into how to solve a 3D puzzle. These tips/strategies help me a lot when I put together a puzzle. While the difficult puzzles are not as difficult as they look, I would probably recommend that someone who has never put one of these puzzles together before start with one of the average difficulty puzzles.

Where Can I Purchase Puzz 3D Puzzles

Due to going in and out of print, it can be somewhat hard to find some of the Puzz 3d puzzles. The rarer puzzles can be quite expensive with some being worth over $100. Since some of the models are still created today, these puzzles are more reasonably priced and are easier to find. If you are looking for a particular puzzle though I would recommend checking out Ebay and Amazon.

While it is not complete, here is a list of as many of the different Puzz 3D puzzles that I could find for sale on Amazon.

Angel in the Attic Board Game Review and Instructions
Click here to cancel reply.

I'm trying to find the instructions for Big Ben 1483 pieces but no luck, anybody help??

@Eric Mortensen, thank you so much for this website! My R2-D2 puzzle was destroyed during my interstate move. I was sooo upset! It had been put together for so long that I don’t have the box or directions anymore. Do you know where I can get a new “voice” box and cardboard inserts?

I don't have the Big Ben Puzz 3D puzzle so unfortunately I can't be of that much help. I did a quick search online and I found this site that seems to have scans of a lot of the Puzz 3D instructions. I haven't checked out any of the instructions on the website but they appear to have instructions for several different versions of the Big Ben puzzle.

[…] you are interested in Puzz 3D puzzles, check out the post I did about Wrebbit Puzz 3D puzzles.  The post includes information about the history of the brand, a look at the variety of Puzz 3D […]