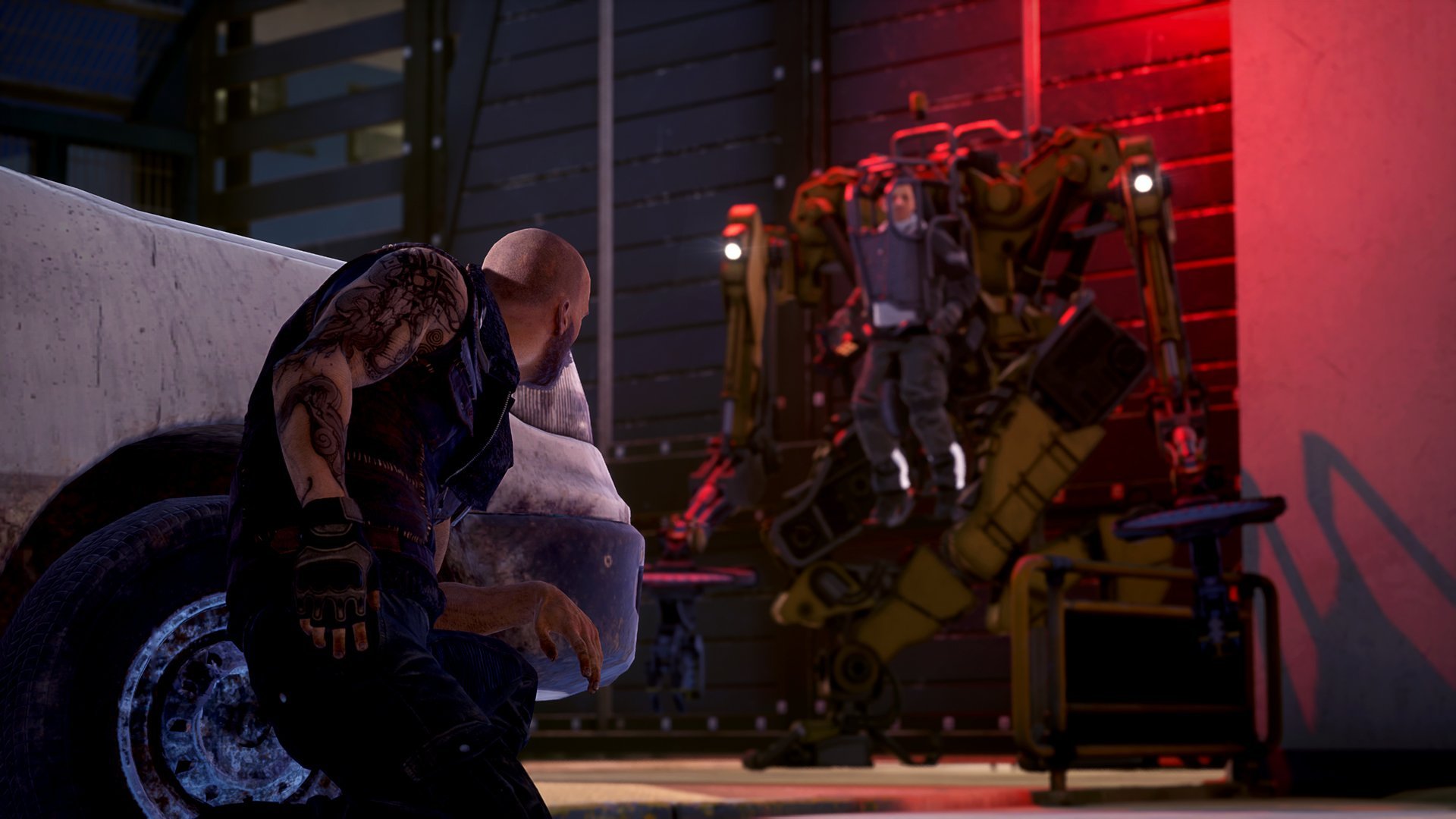 Originally released back in 1992 Werewolf: The Apocalypse was a RPG created in the Chronicles of Darkness line (Vampire: The Masquerade). While the RPG was pretty successful, the franchise has had a rough time making its way to the video game market. Outside of a couple of canceled games and a visual novel released last year, there hasn’t been any other video games set in the universe. Well today I am taking a look at the first major video game release in the franchise Werewolf: The Apocalypse – Earthblood. While I had no experience with the franchise, I was intrigued by the game as I thought it would be fun playing as a werewolf in a combat-centric game. Werewolf: The Apocalypse – Earthblood is a solid game with good werewolf combat that unfortunately has some flaws.

In Werewolf: The Apocalypse – Earthblood you play as Cahal. Cahal is a Garou (basically a werewolf) who has exiled himself from the rest of his pack after letting his rage go too far. The Garou are in charge of protecting Gaia/Mother Earth from an evil force known as the Wyrm who has corrupted the minds of humans to do its bidding. This has lead to the creation of Endron, a powerful oil company that is intent on destroying anything that stands in its way. Cahal is forced to return to his pack in order to hopefully put an end to Endron for good.

If I were to describe Werewolf: The Apocalypse – Earthblood’s gameplay I would say that it mostly breaks down into three main mechanics.

The first main mechanic in the game is a stealth mechanic. In this mode you can change between your wolf and human form with the press of a button. The wolf form moves quicker, can move through ducts in order to reach areas in a more subtle way, and is generally stealthier. Meanwhile the human form is able to interact with panels and other objects, can knock out enemies, and doesn’t immediately alert suspicion when spotted by enemies. The stealth mechanics are pretty typical as you try to move between covers and find other ways to move past enemies without being spotted. If you are stealthy enough you can avoid most combat entirely. Being stealthy is also helpful because it allows you to sabotage panels near you which are activated when the guards are alerted. Each panel you sabotage will significantly damage any enemy reinforcements that enter through the corresponding doors.

I honestly had some mixed feelings about Werewolf: The Apocalypse – Earthblood’s stealth mechanic. The mechanic isn’t particularly original as it doesn’t really add anything unique to the genre. The only somewhat unique mechanic is being able to change between human and wolf form with each form offering different benefits. This doesn’t drastically change the gameplay though. Otherwise the mechanic mostly involves sneaking around behind barriers and knocking out enemies when no one else can see what you are doing. As a fan of stealth mechanics, I found these mechanics to be solid but nothing spectacular. At times the mechanics feel a little clunky though.

When you end up getting caught by guards you will encounter the second main mechanic in the game. You will transform into your werewolf form in order to dispatch of your enemies in a more violent matter. When in combat you will have two different forms/stances that you can easily switch between with the press of a button. There is a more agile form that allows you to attack and move quickly. There is also a heavy form where you aren’t as mobile, but you can deal and take considerably more damage. Your attacks basically consist of a quicker attack, a slower more powerful attack, an aerial attack, and a number of special abilities that you can activate by using rage that you acquire through combat. Additionally you have access to a dodge which allows you to avoid enemy attacks. Once you trigger the combat mechanic you need to eliminate all of the enemies in your current room/location along with any reinforcements that are called in.

The combat is by far the area where Werewolf: The Apocalypse – Earthblood shines the most in my opinion. I will admit that the combat isn’t the deepest. You will have to try to dodge some enemy attacks or you likely will be killed. Otherwise the combat comes down to a lot of button mashing. Despite this I actually found the combat to be really satisfying. The game does a good job making you feel really powerful in the werewolf form. In these fights you are greatly outnumbered, but you can easily mow through the enemies that stand in your way. The two different forms also play quite differently. When in the agile form you can move with ease and quickly close on enemies that are far away. Meanwhile in the heavy form you feel like a tank where you can deal out a lot of damage to enemies. To succeed in combat you really need to switch between the two forms so you can take advantage of the benefits of both. The combat controls are pretty precise as well. I just found the combat to be quite satisfying as it is fun utilizing the abilities to a werewolf to tear apart your enemies.

The final mechanic in Werewolf: The Apocalypse – Earthblood is what I would call an exploration mechanic. When you aren’t dealing with enemy guards and soldiers, you will be exploring the world and talking with other members of your pack. Throughout the world are hidden spirits that you can detect with your werewolf vision. When you interact with these spirits you will gain experience which can be used along with experience from combat to purchase new abilities for your character. Other than finding the hidden spirits you can complete various side missions which will grant you experience as well. Nothing about these mechanics are particularly original as similar mechanics can be found in many other games. They aren’t bad, but they aren’t anything special either.

Honestly I had really mixed feelings about Werewolf: The Apocalypse – Earthblood. The combat is quite satisfying as it is clearly the standout mechanic in the game. The other mechanics are solid but nothing special. I generally had fun with the game. If you are interested in the game’s premise or are a fan of the Werewolf: The Apocalypse franchise, I think you will enjoy the game. The game does have a couple of issues though.

The first has to deal with how the combat and stealth mechanics work together. The combat was significantly more enjoyable than the stealth in my opinion. Outside of rare occasions though, you can skip the combat entirely if you are stealthy. While it could be helpful for some fights to disable the panels and thus hurt the reinforcements, in most cases you don’t really need to be all that stealthy if you don’t want to. You don’t seem to be rewarded in any significant way for getting through areas undetected. The only real benefit is being able to avoid fights or having to deal with significantly less enemies.

There really isn’t any reason that you need to make the fights easier though as they aren’t particularly difficult. I will preface this by saying that the game has three difficulties. An easy mode meant mostly for those who are more interested in the story, a normal mode, and a hard difficulty. I ended up playing the game on normal difficulty, and if I were to chose again I probably would have gone with the hard difficulty. At least for the normal difficulty the game is quite easy. If you want to be stealthy it is not that difficult. In many cases though I was pretty careless while sneaking since the punishment for getting caught was minimal and the combat was honestly more enjoyable than the stealth. Outside of a couple fights I really haven’t encountered much difficulty in the fights as I finished them without any real threat of death. The hard difficulty could be quite a bit more challenging, but if you play on normal difficulty or lower you likely won’t be that challenged by Werewolf: The Apocalypse – Earthblood.

The other main problem that I had with Werewolf: The Apocalypse – Earthblood is that the overall quality just seems kind of hit and miss. I will preface this by saying that I played a pre-release version of the game on PlayStation 4 so this could be different on PlayStation 5/Xbox Series X. There are elements of the game that feel like they came from a AAA studio and other elements where it was obvious that the game was made by a smaller studio. For example lets look at the game’s graphics. There are parts of the game that look quite good. Then there are certain character models and other elements that feel out of place. The voice acting also varies pretty significantly. There are elements of the game that seem to have a lot of polish and other areas that could have used some more. While these usually don’t ruin the game, they do occasionally take you out of the experience.

This brings me to the game’s story. The story is not terrible, but at times it feels kind of generic. As I mentioned at the beginning of the review, the game is based off of the world created for the role playing game. I am not familiar enough with the RPG to say how loyal the game is to the source material. The game’s world is pretty interesting as it has some interesting twists on your typical werewolf story. The problem is that the game’s story is pretty generic. Basically the story boils down to an evil oil company that is destroying the environment in the most cartoonishly evil way. The game’s story revolves around trying to bring down the evil company before it can do even more damage. On top of being pretty generic, the story is also pretty predictable.

At the end of the day I enjoyed playing Werewolf: The Apocalypse – Earthblood, but it was kind of a flawed experience. The game’s greatest strength by far is the combat. The combat is quite enjoyable as it does a good job making you feel like a powerful werewolf. You can mow through enemies quickly and there is a lot of speed to the combat. The game’s stealth mechanics are a little more hit and miss. The mechanics can be kind of fun; but they are pretty generic and can be kind of clunky. There really isn’t any reason to be all that stealthy either as there is no benefit for doing so as the combat is already pretty easy. Otherwise there are elements of the game that are quite good, while there are other parts that are kind of lacking.

My recommendation for the game mostly comes down to your thoughts on the premise. If you don’t really care for the premise or aren’t a big fan of the combat mechanics, I would probably pass on Werewolf: The Apocalypse – Earthblood. Those that are intrigued by the premise though and want a game with fast paced werewolf combat will probably enjoy the game, and should consider picking it up.