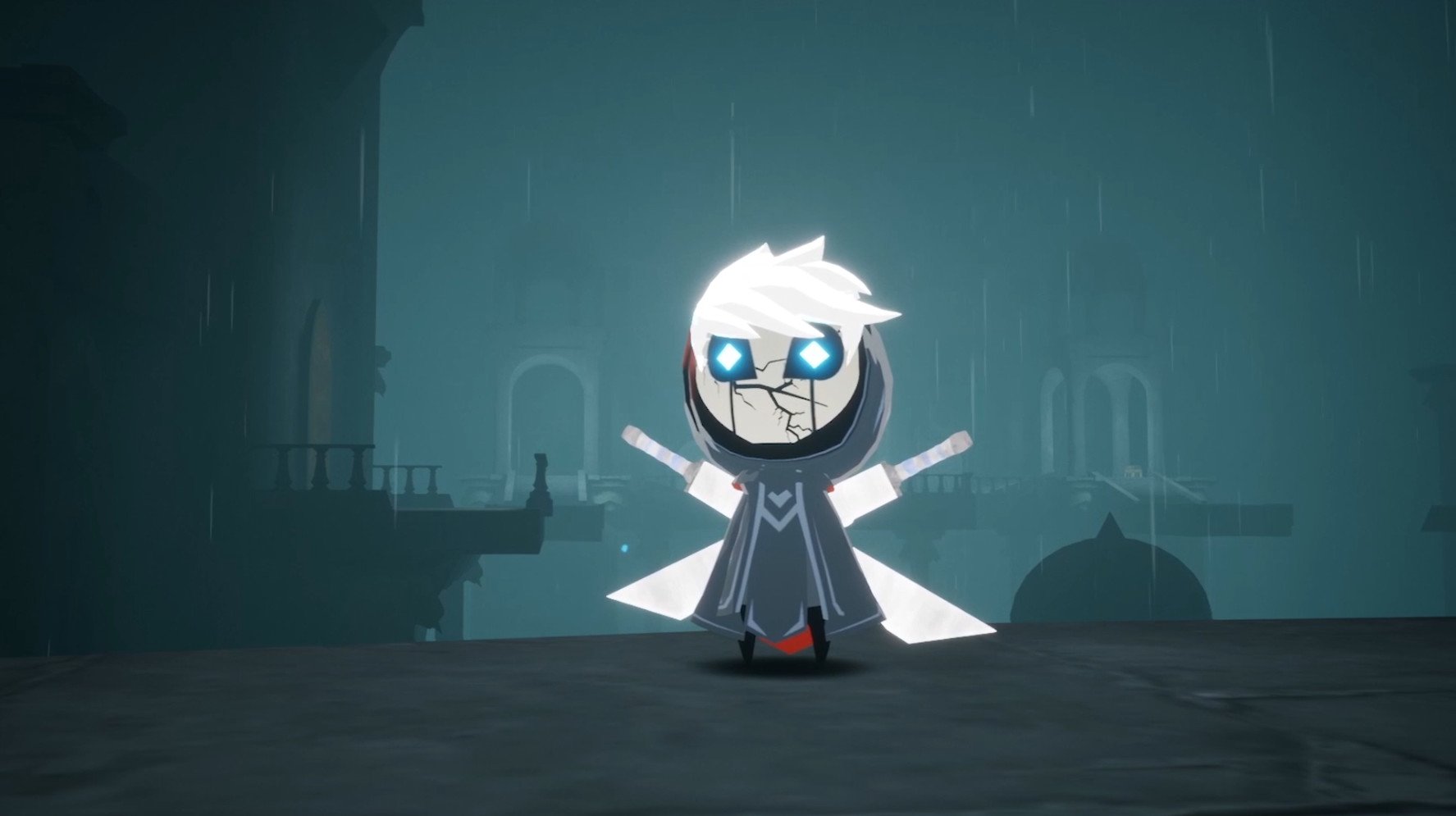 I have to admit that until about a week ago I had never heard of the game Blue Fire which released today on Nintendo Switch and PC. There are so many indie video games released these days that it is really hard to keep up with all of the games that come out. When I first saw Blue Fire though, I was immediately intrigued as it looked like a game that I would really enjoy. My first impression of the game was that it looked like an indie Legend of Zelda which is a franchise that I really enjoy. Blue Fire is an intriguing combination of different genres which creates a compelling and enjoyable experience that is worth checking out.

In Blue Fire you awaken in what appears to be an abandoned castle as a hooded figure that has no knowledge of themselves or the world around them. You are in the kingdom of Penumbra which has seen better days. As you begin to explore the kingdom you soon discover that an evil force of shadows has taken over. You must awaken the kingdom’s guardians and put an end to the shadow threat for good.

When I first saw Blue Fire it immediately reminded me of the Legend of Zelda series. From the character design to the overall world there appeared to be a lot of similarities. While the game is not exactly an indie version of Legend of Zelda, I thought it actually shared a lot in common with the series. Two elements in particular will feel very familiar to Zelda fans.

First Blue Fire relies on a dungeon/shrine system pretty similar to the Zelda series. Each dungeon features a number of interconnected rooms which force you to solve puzzles and find various objects in order to proceed. In each of these locations you are given access to a new item/ability which you will need to use to progress through your current dungeon and the rest of your journey. While the game has some puzzle solving elements, this isn’t as big of element in Blue Fire as the Zelda franchise. Once you reach the end of a dungeon you will face off against a boss which is based around the skills that you have used throughout the dungeon.

The second element that Blue Fire shares with the Zelda franchise is the combat. Throughout the game you will have to fight a number of different types of enemies. The game gives you a sword and a ranged attack that uses mana. You also have a shield which blocks attacks, but I never really used it. The game features a lock on mechanic that lets you quickly switch between targets. Most of the combat relies on attacking with your sword while using your jump and dodge to get in some quick hits before the enemies can retaliate. I would say that the combat in Blue Fire is quite a bit quicker and involves a lot more jumping, but it really reminded me a lot of games from the Zelda franchise.

I found the combat in Blue Fire to be quite satisfying. The combat is pretty streamlined as you don’t have a lot of different attack options. I think the combat works though because it is so quick and precise. Basically your character relies on speed and quick strikes. If you rely on a straight on fight you are going to lose a lot of health. Instead the combat involves getting in a quick hit or two, and then dodging away before the enemy can retaliate. This creates quick combat that is quite satisfying. You will be jumping/dodging between enemies chaining together attacks and dodges. This all works because the controls are precise and work how you would expect them to. When you lose health it is usually your own fault.

So far I have been mostly talking about how Blue Fire feels similar to the Zelda franchise. Of all of the game’s mechanics though, probably the main one is platforming. As you are exploring a run down castle/kingdom the buildings are falling apart leading to a lot of gaps. Thus the game gives you a couple of tools to help you traverse the environment. To begin the game you are given a single jump and a dodge. As you progress through the game you will be given additional tools such as a double jump, and the ability to run along and jump off of walls. In your journey you will also find items/collectibles which you can equip to improve the various abilities.

I would say that you will spend a majority of the game in various platforming sections. This element of the game plays a lot like your typical 3D platformer. The game actually utilizes quite a bit of vertical movement though. The platforming might be similar to other games, but it works really well for one main reason. The controls are really precise and work well. Between your jumps, dodges, and wall runs you have a lot of tools open to you in order to make it over gaps. The game does a really good job making you use all three mechanics in order to get over the gaps. The controls are simple and they work really well. Basically you can’t blame failures on the game as they are almost always your own fault.

First the challenges are really well designed. They can vary in difficulty from pretty easy to quite challenging. Basically if you are like me and really enjoy 3D platformers you will likely love these challenges. There is a decent amount of trial and error to some of them where you will fail and get sent back to the start. You will eventually get down the timing though and figure out what you are supposed to do. When you beat the most difficult challenges you really feel a sense of accomplishment. These challenges were arguably the best element of the game.

The other reason why the challenges are important is due to the reward for completing them. Even if you aren’t able to complete a challenge, you will receive currency that can be used in order to purchase upgrades from the various merchants. The main reason to attempt the challenges though is the reward for completing them. For each challenge that you complete you will receive an additional heart for the rest of the game. If you ignore the challenges you could probably still finish the game, but the game will be considerably harder. You might fail some of the challenges many times, but earning that extra heart makes them worth it.

I was pleasantly surprised by Blue Fire. It is always nice when you find one of those games that really surprise you. I think the main reason why Blue Fire succeeds is  because the gameplay is so satisfying. A lot of this can be attributed to the level design and controls. There really isn’t much more you could have asked for from the controls. The level design is also really well done.

As for Blue Fire’s atmosphere I thought it was quite good as well. In particular I really liked the game’s artstyle. The game has a unique style that works well for the game. The environments are large and varied where it doesn’t feel like you are just going through the same corridors over and over again. The game’s world and characters are pretty interesting as well. As for the story I thought it was solid. I will say that it shares a lot in common with other games from this genre, but I found it interesting enough where I wanted to see how it would end.

I really enjoyed Blue Fire, but it does have one somewhat significant issue. Basically the game requires quite a bit of backtracking at times. This is due to a couple of things. First the game implements a sort of Dark Souls mechanic where you only occasionally encounter checkpoints. These checkpoints require currency to unlock so if you don’t have enough you won’t be able to use them. When you die you will be returned to the last checkpoint that you interacted with. This can sometimes require you to travel a decent distance in order to get back to where you died. In addition when you die you will lose all of the coins/money that you had on you. To get it back you have to return to the location where you died.

I can’t say that I was a fan of this mechanic as it doesn’t really add anything to the game. I don’t mind the idea of checkpoints as you should lose some progress when you die. At times though the checkpoints are too far apart forcing you to do far too much backtracking when you die. I will admit that this makes the game more tense as there is a real punishment for dying, but it just felt like a waste of time in my opinion.

On top of the Dark Souls mechanic the game relies on even more backtracking in the second half of the game. Like a lot of games when you reach a certain point in the game you are basically forced to revisit past locations in order to utilize your new abilities to unlock new areas. In theory this isn’t horrible as a lot of games feature this type of mechanic. The problem is that I personally found the castle/kingdom kind of hard to navigate at times. The game doesn’t give you a map so you pretty much have to remember where everything is. This can lead to you getting lost at times. The backtracking doesn’t ruin the game, but it does hurt it some.

I have to admit that Blue Fire kind of caught me by surprise. At this point I would probably say that it is one of the best indie games to start off 2021. Blue Fire is a really interesting blend of different mechanics that succeeds because the controls are great and the levels are designed really well. The game utilizes a dungeon element similar to Zelda. The combat is pretty similar to Zelda as well. The platforming is probably the game’s main mechanic though. The gameplay in Blue Fire is just really satisfying. The only real issue I had with the game is that it does rely on quite a bit of backtracking at times.

I really enjoyed Blue Fire and would recommend it to most people. If the premise interests you at all and you are looking for a unique new 3D platformer, I would highly recommend checking out Blue Fire.