One thing that all good board games share in common is that they are thoroughly playtested in order to discover issues with the game and try to make the game as balanced as possible. Even bad games usually go through playtesting even if it doesn’t really seem to show in the final product. So when you see a game whose title declares that the game was never playtested, it kind of stands out. While I am guessing that the game was actually playtested and the title is just a joke, you have to wonder how good a game could be that was apparently never playtested. We Didn’t Playtest This At All has some great moments but at the same time has some serious issues.

Shuffle the cards and deal two cards to every player. Choose the first player as randomly as possible.

On your turn you draw a card and play a card. When you play a card you follow the instructions on the card. Some cards will add rules to the game that must be followed or the player will be eliminated. Play then passes to the player on your left. 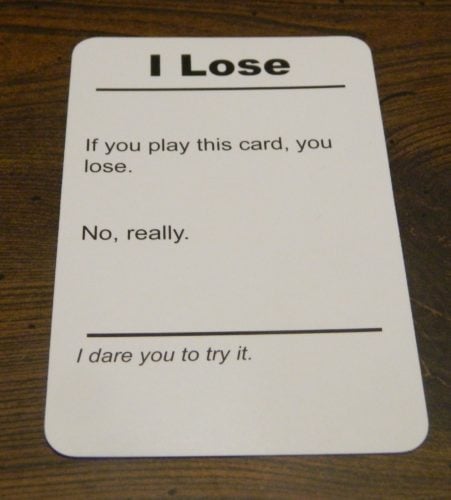 When a player has lost, they are eliminated from the game. A player wins the game either by playing a card that wins them the game or by eliminating all of the other players.

I am going to come right out and say that We Didn’t Playtest This At All is the type of game that most people will either hate or love. This comes from the fact that the game is completely random with the outcome being entirely determined by luck. Outside of picking which card you want to play on your turn, you have no impact on your fate in the game. Another player can play a card that automatically eliminates you from the game with no recourse to prevent them from playing the card.

Luck is so prevalent in the game that the game usually ends before all of the players can even play. We ended up playing several games and all but one of the games ended with all of the players at max playing one card. In the other game most of the players were able to play two cards. The games are so short that you have so little impact on your outcome in the game. While this makes We Didn’t Playtest This At All a good filler game, it will drive people nuts who want a little control over their fate in the game.

To demonstrate how random the game can be here are just a couple things that can happen in the game. There is a card where all of the players automatically win. There are also cards where you automatically win if your birthday is in the current month, you are wearing a certain color, you are the shortest player and so on. There are also many cards that force players to do random things in order to stay in the game. If you don’t want to play a game that doesn’t take itself seriously, We Didn’t Playtest This At All is not going to be for you.

With how random the game is I wonder if it was actually playtested. I have to believe that the game was playtested since while the game is so chaotic it feels like designed chaos. The cards feel random but thought was put into the game where it doesn’t feel like it was just thrown together to make a quick buck. There is still that lingering feeling over whether it was playtested though since the game is totally unfair at times even though the game is meant to be completely random and unfair.

Overall I found We Didn’t Playtest This At All to be a decent game as long as you don’t take it seriously. I am not a huge fan of how the game is completely unfair but the game can be really funny at times. The completely random events that come up can be hilarious. The text on a lot of the cards are also surprisingly funny.

One thing I question about the game is replayability. The game is pretty funny when a player plays a completely random card that has unintended consequences. This randomness is the game’s greatest strength so I am a little concerned about how the cards will hold up once you know what to expect out of all of the different cards. I see getting less enjoyment out of the game the more you play it. With only 54 cards you might only get around 10-20 games before you will repeat cards. That might sound like a lot of games but since most games last 1-5 minutes, I only see playing a couple hours at max before you will be repeating cards.

I don’t really know what to think of the game’s components. The components are extremely bland but they likely were designed that way. The only components for the game are white cards with text on them. I believe this was done with the theme that little work was put into this game so I am not going to really criticize how bland the cards are.

I really don’t know what to think about We Didn’t Playtest This At All. The game is brilliant in how completely random it can be which can lead to a lot of laughter. At the same time you can make an argument that it is not even a game. The game relies entirely on luck and is completely unfair. I also question the game’s replayability. We Didn’t Playtest This At All is a game that I would be willing to play occasionally but it is not something that I would play very often.

If you like to have control over your fate in a game, you are going to hate We Didn’t Playtest This At All. If you like these quirky type games that are completely random and focus more on having a good time than actually being a good game you could get a lot of enjoyment out of the game. If this sounds like the type of game that you like playing and you can get a good deal on it, We Didn’t Playtest This At All may be worth picking up.

If you would like to purchase We Didn’t Playtest This At All, you can purchase it on Amazon