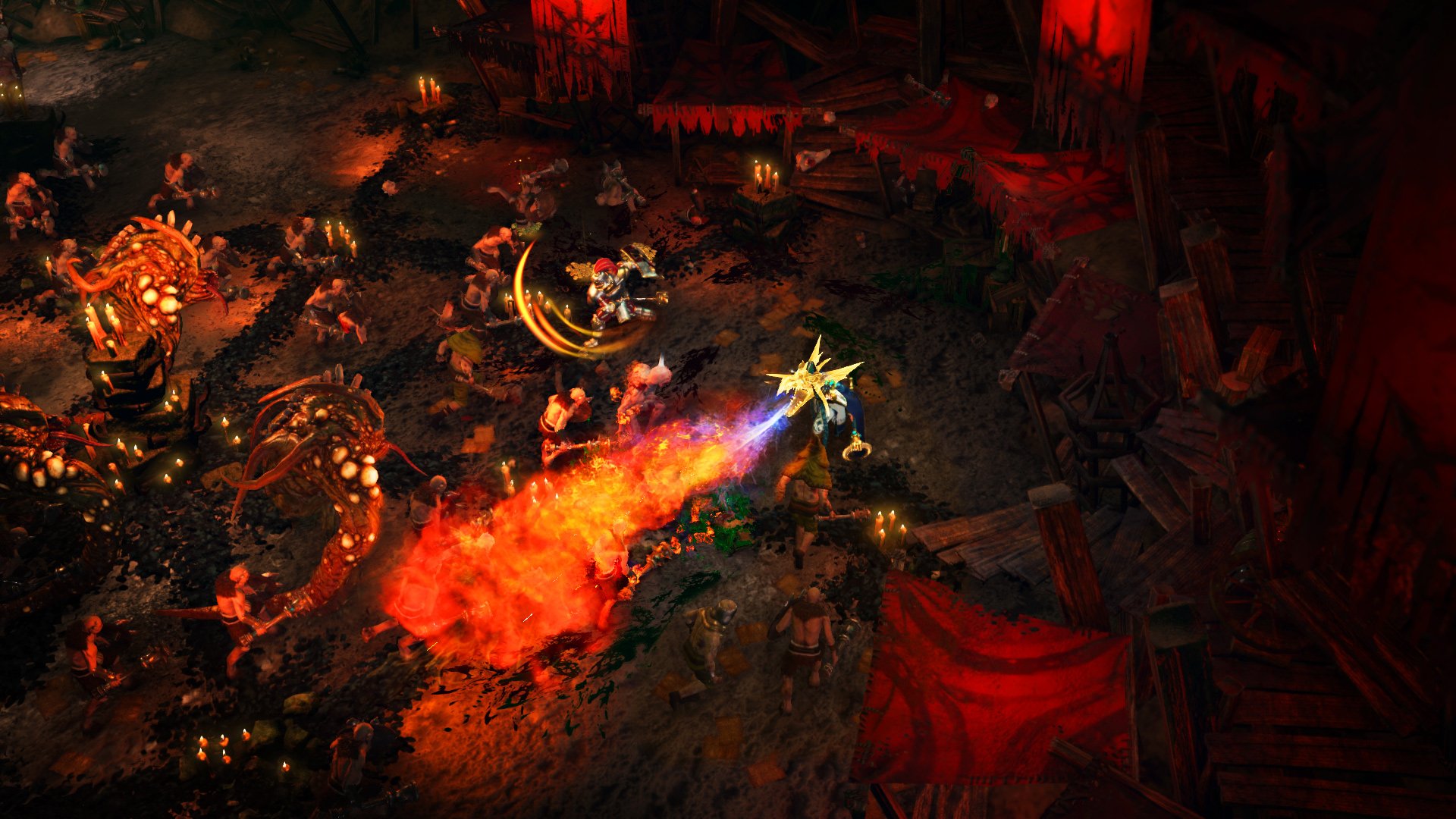 While not my favorite video game genre I would say that I have always enjoyed the action RPG/hack and slash genre. There is just something satisfying about killing tons of enemies and picking up lots of loot. I have also always enjoyed a good co-op game. For these two reasons I was interested in trying out Warhammer: Chaosbane. I personally don’t have much of an opinion on the Warhammer franchise, but the game looked like it could be fun. Warhammer: Chaosbane is a repetitive and flawed experience that somehow is still pretty enjoyable.

In Warhammer: Chaosbane you and up to three friends have to defend the world against the Chaos hordes. Basically the game is your typical action RPG/hack and slash game. If you have ever played a game like Diablo or another similar game before you should have a good idea of what to expect out of the game. You and your friends will use your equipment and abilities to defeat hordes and hordes of enemies. By defeating the enemies you unlock loot that you can pick up as well as gain experience that unlocks additional abilities. Rinse and repeat through level after level as you become more and more powerful allowing you to dispatch more powerful enemies.

If I were to wrap up Warhammer: Chaosbane in a few words it would be “a very average game”. From the gameplay to the story there is nothing particularly special about the game. The gameplay is kind of fun but it is far from original. Basically there is nothing unique about the game. If you have played other games in this genre you have pretty much already played Warhammer: Chaosbane.

The only somewhat original thing the game has to offer is how it handles the inventory. How these type of games handle inventory is important as you will be picking up a lot of it. While I think the game could have had a little more variety with regards to the equipment, I applaud the inventory system for streamlining some of the more monotonous aspects. The thing I liked the most is that all of the items in the game belong to one of the four classes. When a player picks up an item, the item will automatically go to the player that is playing the corresponding class. This saves a lot of time as players don’t have to waste time making sure the items get into the right player’s hands. Whenever a player is close to an item they can pick it up and it will automatically go to the right player. The game also makes it easy to compare your different equipment so you can equip the best items.

What you do with the inventory you don’t want is a little different as well. In most of these type of games you sell off all of your extra goods to a vendor for cash which you use to purchase better equipment and other goods. Warhammer: Chaosbane doesn’t really have a marketplace as you don’t sell your loot for gold. Instead you trade it to acquire new abilities. This might sound weird at first, but it does a good job streamlining things. There is no need to check stores for items which will be replaced shortly by an item you find lying on the ground.

In addition to getting abilities by donating loot and gaining levels, the game also has an upgrade tree. You will use fragments you acquire in your adventures along with the gold you pick up in order to purchase upgrades in the tree. Each upgrade you purchase will unlock additional paths through the tree unlocking more skills and abilities. Which path you choose to travel through the tree will determine which type of abilities and skills you will have access to. This allows you to shape your character to your playstyle. This is an interesting upgrade system that gives you options while remaining simple enough that you don’t have to waste a lot of time figuring out which upgrades to purchase.

The problem is that none of these “unique” mechanics matter as the game turns out to be quite repetitive. The gameplay basically breaks down to the following. You are given a mission to explore an area or kill an enemy. After you succeed in that mission you are sent out to another mission where you basically do the same thing over again. To better explain let me take you through the first act of Warhammer: Chaosbane. The act begins with you being given a quest to explore the sewers. You explore the sewers and return to the base. There the leader gives you another mission which basically revolves around exploring the sewers again. Finish that mission and turn it in. Guess what happens next? What a shocker you are sent to the sewers once again. The gameplay in Warhammer: Chaosbane is really repetitive where it feels like you are stuck in a loop as you are doing the same things over and over again.

This doesn’t just affect the gameplay as it plays a role in the graphics as well. For the most part I don’t think the graphics are bad. Warhammer: Chaosbane is not the best looking game, but it still looks pretty good. The creature designs are pretty cool. Unfortunately the art style gets repetitive after a while. You will be fighting the same creatures over and over again with the occasional boss thrown in from time to time. The locales themselves aren’t that original either. If it wasn’t bad enough that you have to explore the sewers over and over again in the first act, all of the sewers end up looking the same. I could have sworn several of the missions used the exact same level layout. Either the game just reused the same level layouts over and over again or large sections of levels were copied and pasted into other levels.

I will admit that I am not a big fan of the Warhammer franchise. Outside of playing some other Warhammer games, I have no knowledge of the Warhammer franchise. That said I found the story to be pretty silly/bad. As I usually enjoy video game stories, I tried to follow the story from the beginning of the game. That didn’t last long as it was too hard to maintain much interest in the story. The story just feels like your typical fantasy/sci-fi story told hundreds of times before. It didn’t help that the story was pretty silly and as repetitive as the rest of the game. The voice acting doesn’t help things either. Some of the voice acting isn’t bad, but some of it is quite bad. Maybe fans of Warhammer will get more out of the story, but I found it to be pretty dull.

So at this point most people are probably thinking that I hated Warhammer: Chaosbane as I have spent much of this review complaining about it. There are plenty of reasons to not like Warhammer: Chaosbane, and yet I kept playing it. I can’t really explain why, but Warhammer: Chaosbane is one of those games that are more enjoyable than they should be. There is just something satisfying about mowing through hordes of enemies as you collect a bunch of loot which you use to kill even more enemies. The gameplay is simple and yet satisfying. People who like hack and slash games where you fight through hordes and hordes of enemies should enjoy the game. There are games in this genre that are considerably better, but if you are looking for a new game to try out you can do worse.

At this point I have not finished the game so I can’t give you a definitive length. How much time you ultimately get out of the game is going to depend on a couple things. First it will depend on how much time you spend exploring each level. If you just run straight to the destination and don’t bother finding all of the loot along the way, the game will be quite a bit shorter than if you try to find every piece of loot. Second the length will depend on whether you try to max out your level and explore the post game content. For most people I think the length will range between 10-20 hours. If you rush through each level I see the game only taking around 10 hours and maybe even a little less. If you fully explore every level though I can see the game taking closer to 15-20 hours. If you want to max out your level/loot I could see the game taking more than 20 hours.

On the surface Warhammer: Chaosbane is a really average action RPG/hack and slash. You kill enemies for loot, rinse and repeat. This isn’t helped by the game as it can become quite repetitive. The game likes to reuse the same environments and missions over and over again. There is very little variety in the gameplay. On top of all of this the story is pretty bad where I pretty much gave up on it entirely. With all of this working against it you would think that I didn’t enjoy Warhammer: Chaosbane. For some reason I still had fun with the game and kept coming back to it. I think this has to do with the gameplay being surprisingly satisfying. There is just something enjoyable about killing a bunch of enemies and picking up loot. While the game has obvious flaws, fans of these type of games should have fun with the game.