Back in the 1950s Disney created a series of board games based on their theme parks. A little while back we checked out Walt Disney’s Adventureland game and today I am back to talk about Walt Disney’s Fantasyland Game. The Adventureland game was a pretty typical children’s game that was far from deep, but had a sort of charm to it. I thought the Fantasyland land was going to be pretty similar, but was I hoping to be surprised. Walt Disney’s Fantasyland Game may appeal to Disney fans or those that have nostalgia for it, but the gameplay is really lacking.

Each player will begin their turn by moving their pieces forward a number of spaces corresponding to the number on the space that they started their turn on. If a player doesn’t land on a ticket or star space, their turn ends immediately. Two or more players may occupy the same space. 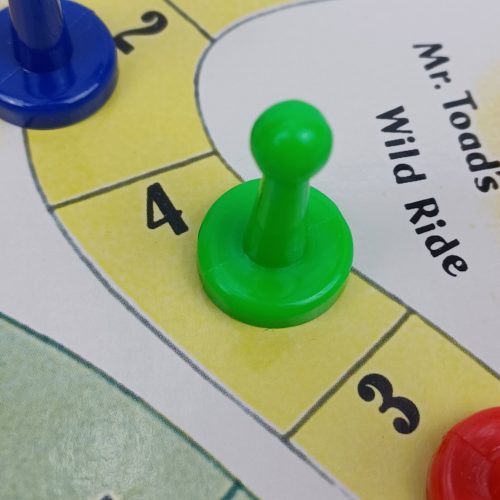 The green player is on a space that has a four on it. For their turn they will move their piece forward four spaces.

If a player lands on a star or ticket space, they take the top ticket/star from the corresponding draw pile. The player will then move their playing piece forward the corresponding number of spaces. If the player lands on another star or ticket space, they will draw another ticket/star and move once again. This continues until they land on a space with a number on it. All stars and tickets acquired throughout the game will be kept for the end of the game. 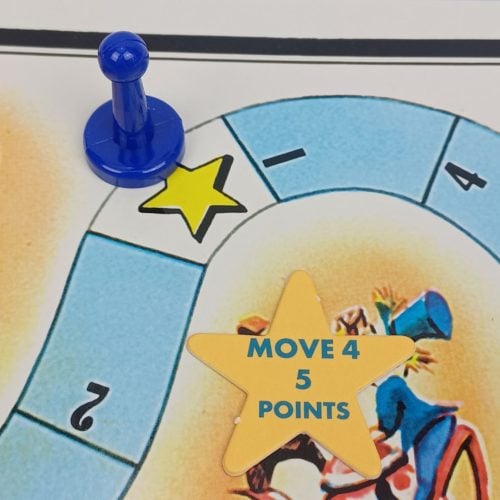 The blue player has drawn a star which will move them forward four spaces. After moving they will keep the star as it will score them five points at the end of the game. 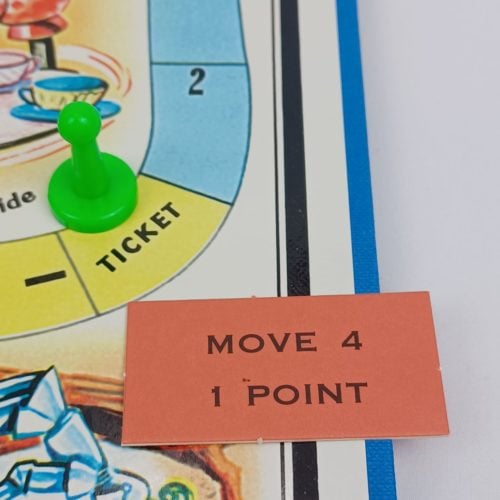 This player has drawn a ticket which will move them forward four spaces. After moving the spaces they will keep the ticket as it will score them one point at the end of the game. 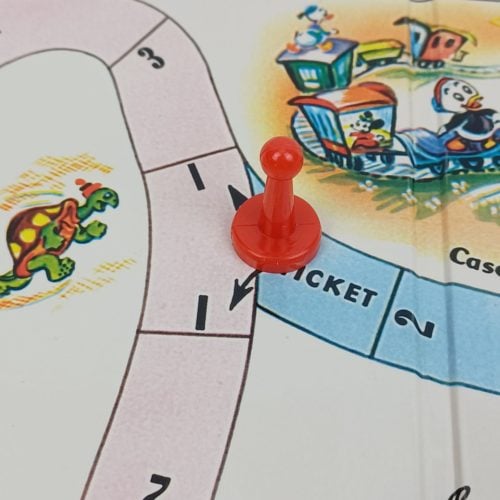 The red player has reached a crossroad in the game. They can either choose to go up or down.

The game ends when one player reaches the finish space. This player will get to draw a star and then the game ends. 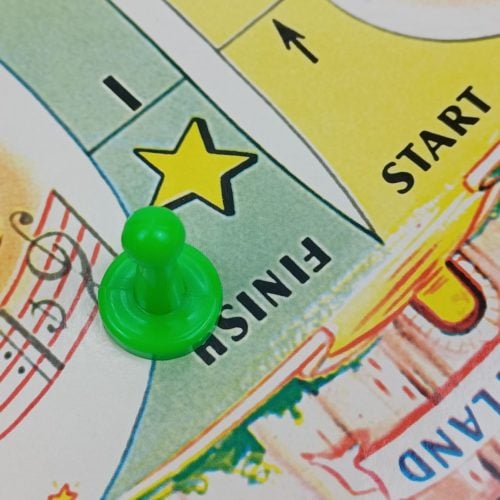 All of the players will count up the numbers on all of the stars and tickets they acquired throughout the game. The player who acquired the most points wins the game. 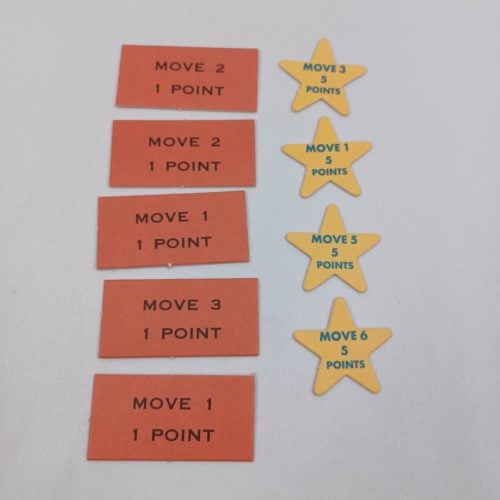 One player acquired these tickets and stars during the game. Their stars and tickets have earned them 25 points.

While I didn’t have high hopes for Walt Disney’s Fantasyland Game, I held out hope that it would surpass my expectations. Unfortunately the game may have been even worse than I expected.

The main problem with it is just the fact that you could make an argument that it isn’t even a game. Most of the time the game plays itself. Most games at least let you roll the dice or spin a spinner to determine how many spaces you get to move. This isn’t even present in Walt Disney’s Fantasyland Game. Basically you just move your piece forward based on what is written on your current space or the card you draw. In many ways it feels like the game plays itself as you have very little input into what actually happens in the game. If it wasn’t for the one decision that you do get to make, the winner of the game would actually be decided by the order of the cards as everyone’s movement would be predetermined by the order of the cards.

The only decision that the game gives you is whether you want to go down the side paths. Basically the side paths take you away from reaching the finish, but they allow you to take a star card which will give you points at the end of the game. Unlike a lot of these type of children’s games, it doesn’t actually matter who finishes the game first. Instead the winner is determined by who earns the most points. While the player that finishes first gets to draw a star card which will give them points, the real goal of the game is just to acquire as many cards as possible. Thus outside of rare occasions you likely will always want to go down the side paths as the star cards give you the most points in the game so you want to acquire as many as possible. The one decision you get to make in the game is usually so obvious that there really isn’t much actual gameplay to Walt Disney’s Fantasyland Game.

On top of this the game has some really weird quirks to it. Early in the game you can basically get stuck in a loop that is actually pretty hard to get out of. Normally this would be a bad thing, but it is actually the best case scenario in the game. Near the Casey Jr. Train Ride there is a sequence of spaces where you basically go forward one space, gather a star which likely will make you move forward one space, move forward two spaces, and then move back four spaces. This series then just repeats itself over again. In the game I played one player actually got stuck in this loop for the entire game which allowed them to draw five stars which helped them tie for victory in the game. This is a really quirky element of the game and it basically proves that all that matters in the game is drawing as many star cards as possible.

If it wasn’t evident already, Walt Disney’s Fantasyland Game is just not a very good game. The only actual gameplay in the game is deciding whether to go down the side paths. As the goal in the game is basically to collect as many star cards as possible, outside of rare occurrences you almost always want to take the side paths. Thus the game ends up basically playing itself. Because of this the game is just boring to play. Older children and adults will basically be going through the motions after just a couple of turns.

While the game is not good for adults or older children, I could see younger children liking the game especially if they are a fan of Disney. The game is easy to play as you basically just follow the numbers printed on the spaces and cards. In fact I think the game could be a good tool to teach young children basic counting skills. Outside of adults having to maybe help younger children with the counting, I can’t see children having any trouble playing the game. The game also plays really quickly as I would guess most games would end in 10-15 minutes unless players take their time moving the pieces around the board. When you add in the colorful artwork and the Disney characters I can see the game appealing to younger children.

Outside of younger children and parents/grandparents/etc, the only other people who likely will have any interest in the game are people who are huge fans of Disneyland/Disney World. In a way I see the game as more of a collectible than an actual game. The gameplay itself is not something that is really worth your time. Those who collect things associated with the parks will likely appreciate the game as a collectible though. I ended up playing the 2005 reprint of the original 1956 version of the game. The gameplay and the graphics appear to be exactly the same as the original version of the game. Outside of some very minor differences, the only way to tell the difference between the two versions is that the reprints are likely to be in much better condition.

While the gameplay has nothing to do with visiting Fantasyland, I think the game otherwise does a good job with the theme. The game has that sort of charm you normally expect from 1950s board games. The game actually features a number of rides from the actual park as well which should interest fans of the parks. I don’t know if I would say the artwork lives up to today’s standards, but it has its own sort of charm typical of games made during the 1950s. While I personally wouldn’t recommend wasting your time playing the game unless you have young children to play it with, I could see the value in the game as a collectible.

Simply put I didn’t think Walt Disney’s Fantasyland Game was a particularly good game. In fact the game mostly plays itself. You basically just follow the numbers printed on the spaces you land on and the cards you draw. The only real impact you have on the game is deciding whether you want to go down the side paths. As collecting stars is the best way to win the game, you pretty much should always want to go down the side paths as they will allow you to collect more stars. This leads to a really dull game for older children and adults as it feels like the game plays itself. I could see the gameplay appealing to younger children though due to the theme and the simple gameplay. Otherwise the game does a pretty good job with the theme except that it doesn’t impact the gameplay at all.