Each player chooses a color and takes all 28 tiles of their color (make sure the blank tiles are kept in the box). The tiles are placed face down in a pile and are shuffled. Each player randomly takes 5 tiles and places them in their rack. One player is selected as the first player and plays proceeds in a clockwise manner.

Each player’s turn consists of playing a tile to the game board. Number tiles can only be placed on one of the nine spaces in the corresponding number column. Letter tiles can only be played in the corresponding letter row. Picture tiles can only be played in the 3X3 grid that features the same picture as the picture on the tile. Each player also has one “$” which can be played on any space on the game board. Tiles can be played on any empty space or under certain circumstances can replace another player’s tile. After playing a tile the player draws another tile for their rack and play moves to the next player. Play continues in this manner until everyone draws their last tile. All players get one more turn and then the game ends. 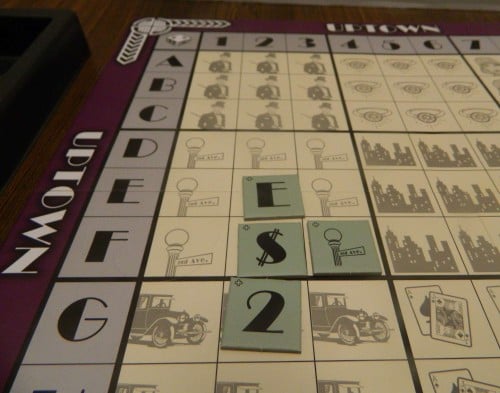 In Uptown players play their tiles into groups. A group is a set of tiles that are connected to one another vertically or horizontally (diagonal doesn’t count). Before capturing another player’s tile, you must check to make sure that by taking the tile you aren’t breaking that player’s group of tiles into multiple different groups. For example a player cannot remove a tile that is the connection between two or more tiles. If removing the tile would not break up the other player’s group, the tile can be removed. 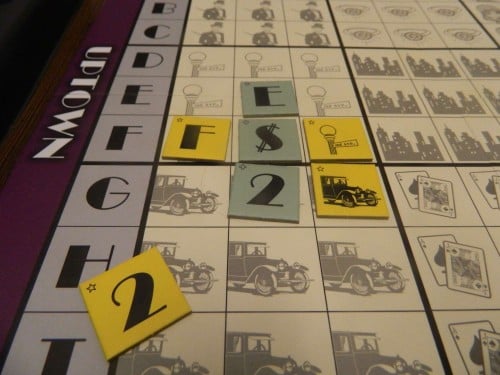 Whenever a player takes another player’s tile they must place the tile in front of themselves. Tiles taken during the game work as a tiebreaker at the end of the game.

The object of Uptown is to try and connect your tiles together to form as few groups as possible. The player who has the fewest groups is the winner of the game. In case of a tie, the number of tiles captured from other players is used as the tiebreaker. The tied player who has captured the fewest tiles wins. 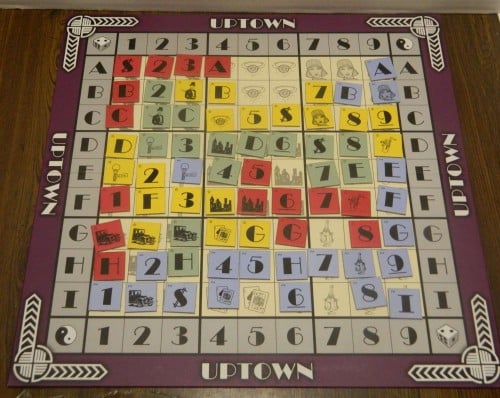 This game has been finalized. The green and yellow player tied by having only two different groups of tiles. The green player ended up winning this game since they had taken fewer opponent tiles during the game.

In the two player variant, both players control two different colors. The game is played in the same way as the normal game except that each player gets to pick which of their two colors they would like to play on a turn. Players can never capture tiles of their other color. When you play a tile you must draw a tile of the same color. When one of the colors have only four tiles left, you may no longer use that color for the rest of the game. The game continues until both players have finished playing tiles for both colors. Whoever has the least number of groups between their two colors wins the game. The tiebreaker rules work the same as in the normal game.

A Theme Doesn’t Make A Game

Generally I like to start board game reviews talking about the gameplay itself, but with Uptown I have to talk about the theme. Uptown has to be in the running for one of the worst implementations of a theme that I have ever seen. Outside the artwork on the box and components, the theme is totally non existent in Uptown.

The outer box claims that Uptown features a “Roarin’ 20’s” theme. While the Roarin’ 20’s is not the best theme, it intrigued me enough to give the game a chance. No one should buy this game based on its’ theme. The theme has no actual impact on the game and the game would have actually been better off without a theme. The designer must have agreed with me since the game was reprinted as the game Blockers! which ditches a theme entirely and just uses simple shapes. I honestly think this is what should have been done with Uptown.

So you must be thinking that I hated Uptown. As it turns out, I actually kind of enjoyed the game. Uptown is the perfect example of a game that shows while theme is helpful, it doesn’t determine whether a game is good or not. I see Uptown as a abstract game instead of a game where a terrible theme was pasted on. If you hate abstract games, you won’t like Uptown. If you don’t mind abstract games though I think you can enjoy Uptown.

Uptown’s greatest strength is the fact that it is easy to learn and quick to play. The instructions are only about a page and a half long and take just a couple minutes to fully understand. This makes the game very accessible since you can learn how to play the game in only a couple minutes. The game is simple enough that non-gamers should have no problem understanding how to play the game. A typically game also only lasts about 20-30 minutes.

Just because the game is easy to learn doesn’t mean that it doesn’t have adequate strategy. I would say that Uptown is deceptively simple.  I would classify Uptown as a light to moderate strategy game. It is the type of game where if you don’t play strategically you will have no chance at winning but you also aren’t stuck there staring at the board forever working through every possible move.

One thing that I find interesting about the strategy is that the game has what is called “almost perfect information”. Every player knows a lot of information about what tiles the other players have and what they could be planning on doing. Every player has the same tiles and there is only one of each type of tile. Players can easily see what tiles other players have already played. This means that an observant player can get a good idea what moves another player can make and what they are likely to do in future turns. This makes the game interesting since you have a good idea what another player is planning on doing but you are unsure when they are going to make the move and you may not even be able to stop it.

Although the game has a lot more strategy than you would expect, the game does still rely quite a bit on luck. Luck comes into play while drawing tiles, and when players’ strategies conflict.

The luck of the draw has a big impact on the game. The game is designed where you will eventually get all of the different tiles in the game. The order in which you draw the tiles is very important though. If you draw a lot of tiles that can be placed near one another early in the game you are in a good position since you will be able to build a large group of tiles. If you draw a bunch of tiles that cannot be placed close to one another you are going to have some troubles since you will have to form a couple different groups which you may not be able to join together.

The other players’ strategies will also have an impact on your game. If you are in a tightly contested area with another player you will end up hurting one another. You will get in each others’ way which will make it hard to combine your tiles into groups. You will also be forced into taking each others’ tiles which really hurts when tiebreakers are factored in. If a player ends up being able to play their tiles in an area with little competition they will have a pretty significant advantage. It will be easier to connect their tiles and they won’t have to pick up opponent tiles.

Messing With Other Players

One thing I really liked about Uptown is that while you can go after the other players, the game does a good job trying to convince you to try and avoid conflict as much as possible. Generally if you can avoid taking other players’ tiles, you are best off trying to. Typically the player that is attacked might lose a little flexibility for future moves but otherwise is not really hurt when another player takes one of their tiles.

The attacker gets most of the punishment due to the tiebreaker. In the game I played two players had two groups and the other two players had three groups. The game was very close and I am guessing that most games will be just as close. I think the tiebreaker will be used to decide the final winner of many games.

Overall Uptown’s components are pretty average. The tiles and game board are made of a pretty thick cardboard which should be durable over extended use. My problem with the components is an extension of my problem with the “theme”. The game just has no style. The artwork on the cards and tiles is decent but it is so bland.

Overall Uptown is an interesting game. The theme is totally pointless and is just a waste of time. As a game though Uptown is a pretty good game. The game does a great job of being accessible while also having enough strategy for most people.While the game has quite a bit of luck involved, there is also quite a bit of strategy. Gamers who only love highly strategic games won’t like Uptown but people who enjoy light to moderate strategy games could get some fun out of the game.

If you hate abstract games lacking theme or don’t like light to moderate strategy games, you probably won’t like Uptown. If the game mechanics look interesting to you and you can ignore the pointless theme, I think you will enjoy Uptown.