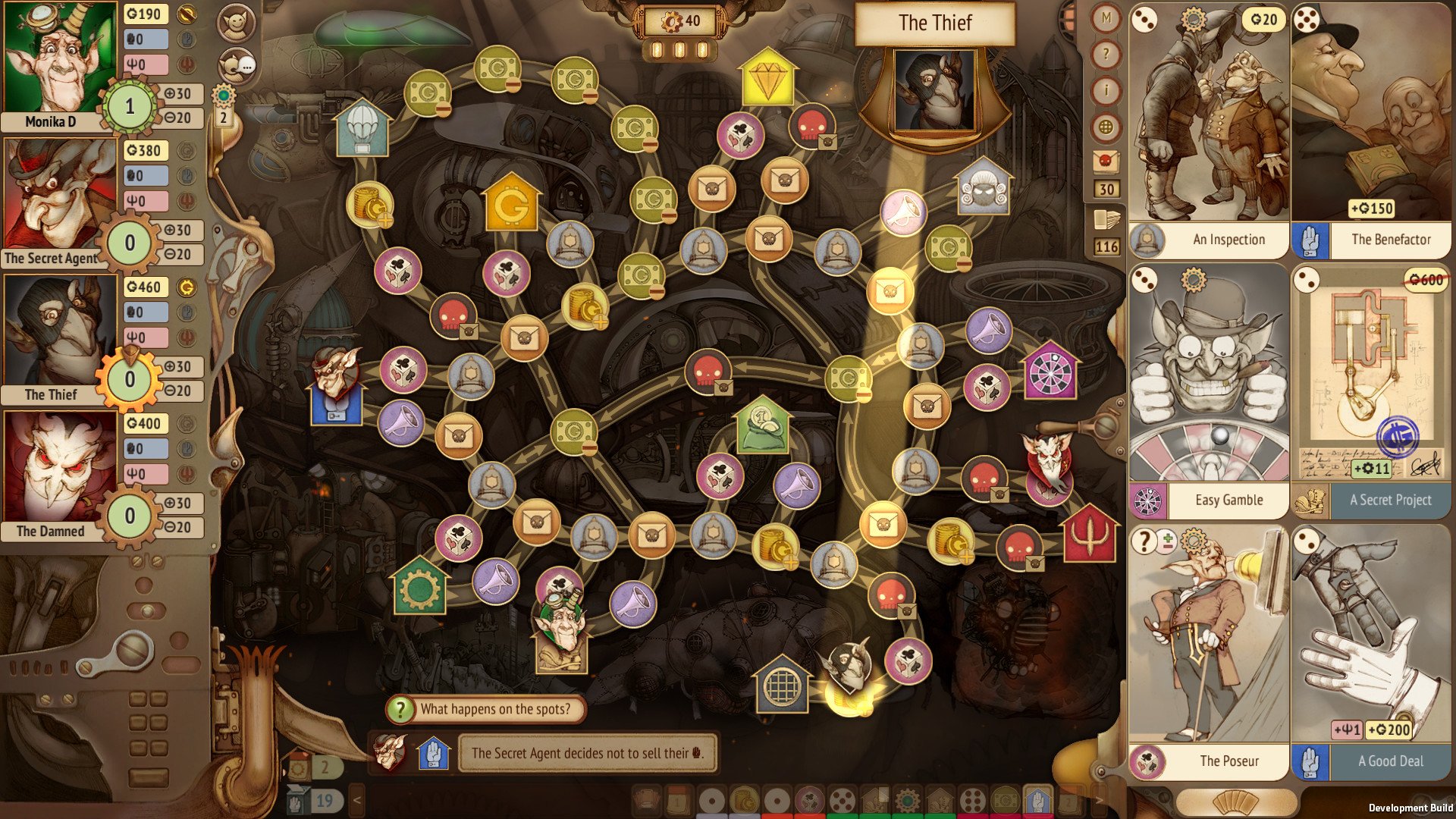 Being a fan of board games and video games I am always interested in trying out digital board games. With a digital board game you can do a good job simulating a board game while eliminating tedious record keeping and adding mechanics that you couldn’t have in a traditional board game. With a quick glance at Gremlins, Inc. it might look like a generic roll and move game since most of the gameplay involves moving around the gameboard. Looks can be deceiving though since there is quite a bit more to Gremlins, Inc than a generic roll and move game.

Lets start with movement. While most of the game’s mechanics involve moving around the gameboard, instead of using dice you use cards that you draw. Every card in the game has a number in the top left corner which indicates how many spaces you can move by playing the card. Since you know what cards you have in your hand you can choose which card you want to play so you can plan which space you want to land on each turn. There is some luck regarding which cards you end up drawing since your movement options are limited if you draw a lot of cards with the same number or cards with low numbers. There is a lot more strategy to movement than there is in your typical roll and move game though.

What makes the cards really interesting is that all of the cards can either be used for movement or for their effect when played on a corresponding space. The effects of the cards generally help you gain resources, hurt the other players, or give you some other advantage in the game. In Gremlins, Inc there are basically six resources. First there is money which is mostly used to pay fines, bribes and is used to pay for the use of certain cards. Next there is your income and bribes which indicate how much money you earn/lose when you pass certain spaces. Votes indicate how popular you are among the gremlins which help you win elections which give you beneficial treatment in the game when you win an election. Malice comes into play in regards to certain effects of cards and can give you votes in a election if you have the least malice. Finally there are your victory points which will ultimately win or lose you the game.

Most long term readers of Geeky Hobbies will know that I don’t love roll and move games. The main problem I have with roll and move games is that they almost entirely rely on luck. You roll well and you will likely win and vice versa. I like games where the players have at least some impact in the outcome of the game. This is where I think Gremlins, Inc really shines. The game takes some mechanics from the roll and move genre but adds a lot of mechanics from more modern strategic board games to add quite a bit of strategy to the game.

I would classify Gremlins, Inc. as one of those games that are easy to play but hard to master. I give the developers a lot of credit for creating good tutorials for the game. Without the tutorials I think the game could have taken quite a while to learn. The game’s tutorials move at a quick enough pace and yet do a good job explaining the different parts of the game. The one problem with the tutorial is that it feels like a chapter of the tutorial is missing since the tutorial explains everything so well and then there is no tutorial explaining some of the less important rules (jail, elections, etc). This essentially turns your first game into a learning experience since you don’t know all of the rules to the game. After your first game you will have a good grasp on the game but I wish the game would have just included another tutorial to explain the rules not mentioned in the other tutorials.

The reason that Gremlins, Inc. is a hard game to master is the fact that the game has so many different ways to play the game. While your ultimate goal is to earn victory points, there are a lot of different ways to acquire them. I always love this in board games since it gives you options which let players adapt to their situation and try and craft a strategy to win the game.  While the cards you draw will have an impact on what strategy you implement, Gremlins, Inc is always changing so you always have to be willing to change your strategy.

On top of some good mechanics, Gremlins, Inc does a great job with its’ atmosphere. Basically Gremlins, Inc. takes a fantasy/goblin theme and blends it with a steampunk theme. The theme works really well for the game. Add in some amazing artwork and the game comes to life even if it is just an interactive board game.

While there is a lot I liked about Gremlins, Inc. there are a couple issues with the game. The biggest problem with the game is that while the game has a lot of strategy the game also has a lot of luck in it. Smart gameplay will help you in the game but if you get bad cards or roll poorly you won’t win the game. You could develop a great strategy and the next minute it can be ruined by bad luck or another player.

This leads to biggest problem I had with the game which is that the game feels like it is against you. Gremlins, Inc. can be a brutal game. The game is designed as a game where you are supposed to mess with the other players. The problem is that players can have a huge impact on one another in the game. Basically if all of the other players work together they could easily gang up on the player in first place and slow them down to the point where they quickly fall out of first place. Generally I don’t hate take that games but they aren’t always my favorite mechanics. They work better in Gremlins, Inc. than most games because they fit well with the theme. I think they can go a little too far though since players can constantly mess with each other which disrupts the gameplay in my opinion.

These two problems lead to the game taking a lot longer than it should. Gremlins, Inc feels like a 30-45 minute game but in reality takes closer to an hour to an hour and a half. This is mostly due to the reliance on luck, players continually messing with one another and the fact that the board is actively working against you. It regularly feels like you are never making any progress and are just treading water. In one game after 30-45 minutes all of the players only had around 5-6 points. I would say close to 75-80% of the spaces on the gameboard are potential negative spaces. You will be regularly losing money and facing other misfortunes. This makes it hard to keep cash and victory points which means you are regularly treading water. This forces you to waste a lot of time just acquiring money to use to play cards to earn victory points. Add in the fact that you will regularly be sent to jail and Gremlins Inc. ends up lasting a lot longer than it should.

With it being really hard to make progress in the game I would highly recommend against playing games that require players to earn a lot of victory points. 20 victory points takes around 45 minutes to an hour and games requiring more points than that can take much longer. Since the game doesn’t have a save feature you need to be willing to play a two hour plus game if you are playing a game that requires a lot of victory points. Therefore I would highly recommend playing games with a set time limit or a set number of turns since you can then limit how long a game will last.

Currently Gremlins, Inc has three DLCs which include Uninvited Guests, Automated Competitors, and Astral Gamblers. Each DLC retails for $5. Basically the DLCs are cosmetic upgrades since none of the DLCs add cards or other mechanics to the game. The developers are using the DLC as cosmetic additions to stylize your profile for online play and to support the developer. This was done since all additions to the actual gameplay are added as free updates to the game so everyone has an equal chance of winning online games. Basically my recommendations for the DLC come down to whether you are interested in the cosmetic improvements or if you want to support the developer. Since they don’t impact gameplay there is no need to purchase them if you don’t care for the cosmetic upgrades.

Gremlins, Inc is an interesting twist to the typical digital board game. While the game may look like a typical roll and move game, there are a lot of interesting additions and tweaks to the formula which add a lot of strategy to the game. While the player who acquires the most points will always win the game, there are a surprising amount of different ways to score points in the game which creates many different ways to play the game. Basically the only complaints that I have with the game is that there is still a high reliance on luck and games take too long. Gremlins, Inc. feels like a 30-45 minute game and yet games can easily take longer than an hour.