Even when I was younger, I used to play a lot of board games. I hate to admit it but Monopoly was actually one of my favorites during my childhood. While I still play a lot of games (as the nearly 300 reviews we have published on Geeky Hobbies should prove), over the last few years I have discovered the magic of designer games and have grown to pretty much hate the game of Monopoly. It is pretty much the perfect storm of things I hate in board games; it requires a lot of luck, winning the game requires hurting (and bankrupting) your friends or family, deals rarely make any sense to make (somebody is almost certainly going to get the better end of any deal you actually do make), and the game takes forever to play if nobody is willing to make a risky or stupid trade. While I pretty much hate Monopoly as a game nowadays, I do love documentaries (especially hobby ones) and I actually enjoyed Under the Boardwalk: The Monopoly Story quite a bit. While it isn’t the most entertaining documentary out there, it is very informative, pretty well-made, and should definitely appeal to Monopoly fans and probably most gamers in general (even if you hate Monopoly like I do).

While the main focus of Under the Boardwalk: The Monopoly Story is on the competitors attempting to qualify for the 2009 Monopoly World Championships in Las Vegas, the documentary also spends some time giving a pretty in-depth history of the game, talks about how the game became a pop culture phenomenon, and covers the globalization of the game. While I already knew several of the fun facts the documentary revealed (that the game is actually anti-capitalist and that it saved the lives of some prisoners of war during World War II), I had no idea how crazy its path to publication was (as the documentary describes it “a 30-year, 30-mile journey”) or that Parker Brothers initially passed on the game (and now owes the game’s heirs an annual royalty because of it). Rounding out the documentary is some strategy talk (while the game is mostly luck there are a few good tips presented like red and orange properties are actually the best because they are just past the jail which players go to an above average amount of times in a game) and a look at some Monopoly collectors’ collections (including one guy who has over 600 different sealed copies of the game). I always love to see people’s collections and I actually wish a little more time was spent on the subject.

However, Under the Boardwalk: The Monopoly Story mainly focuses on the competitive aspect of the game. The documentary shows us a little bit from every step up the ladder, starting with qualifying from online tests and games, then moving to the various national championships around the world (and the film shows us the end of many of them) including a much longer focus on the United States National Championship, and finally the last twenty minutes or so are spent on the 2009 Monopoly World Championships. The main competitors featured in Under the Boardwalk: The Monopoly Story are Domenic Murgo (young and comes off a little arrogant), Tim Vandenberg (a teacher who uses Monopoly to teach math to students), Matt McNally (the defending U.S. champion and again one of the top competitors in this year’s championship), Ken Koury (definitely the “villain” of the film who placed third in the U.S. championship last time), Dale Crabtree (who just barely qualified for the United States World Championship), and Rick Marinaccio (an unknown player none of the others know who just plays Monopoly with his family but makes one heck of a run in the tournaments). 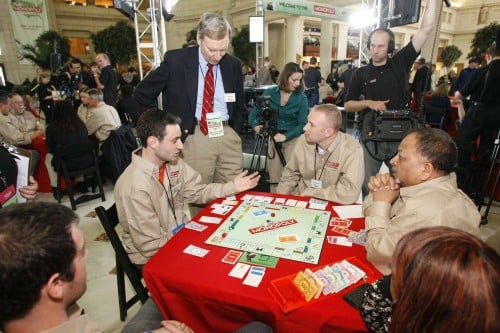 One of the main reasons I love hobby documentaries is because they usually feature extremely passionate hobbyists who almost always sell me on giving their hobby a try or give me the extra push I need to do something I’ve always wanted to do. The more eccentric and excited about their hobby they are, the better. While the featured cast of Under the Boardwalk: The Monopoly Story is certainly passionate about their chosen hobby, they unfortunately aren’t really all that entertaining. Despite being accused of “cheating” by Ken Koury (for a minor infraction I don’t think I would even call cheating), Tim Vandenberg is the most likable while Koury is the most entertaining (he isn’t quite a Billy Mitchell-like villain but he could have been if he got more time). None of the remaining documentary subjects are particularly memorable, funny, or entertaining.

While just under an hour-and-a-half is somewhat on the long side for a niche documentary, Under the Boardwalk: The Monopoly Story doesn’t feel overly long because it spends a little bit of time on just about everything about the game (from its collectors to its long history). The documentary would have been a bit too long if it had just focused on the competition though so I’m very glad they decided to diversify. The only problem with the diversification is that some of the topics (especially the segment on collectors) actually feel a bit too short and could have been expanded.

While he isn’t utilized too much, Zachary Levi (aka Chuck from the criminally underrated “Chuck” television show) does a pretty solid job as narrator. He mostly just gets to narrate the history and the other non-competitive subjects though (he rarely gets a chance to narrate during the competitive portions). Most importantly, the documentary is almost completely told from interviews and narration, not from walls of text like some documentaries.

Under the Boardwalk: The Monopoly Story is a five-year-old documentary at this point and while the video and sound quality definitely isn’t great, it is acceptable if not good for its age. The score is alright but not something I would actively seek out to listen to again.

Overall, I would say that Under the Boardwalk: The Monopoly Story is a good but not great gaming documentary that is definitely informative but is lacking a bit in entertainment and humor (I know documentaries aren’t necessarily supposed to be funny but I generally prefer ones with a few good light-hearted moments). I do think Monopoly fans will enjoy it and other gamers should probably give it a try as well. The film is G-rated and family-friendly so it is definitely suitable for kids (although I don’t think many of them will particularly enjoy this documentary). Even if you hate Monopoly, Under the Boardwalk is a solid but unspectacular documentary that I would recommend.

Thanks for reviewing our film! I appreciate the time you spent watching and thinking about the film for you to write your review.